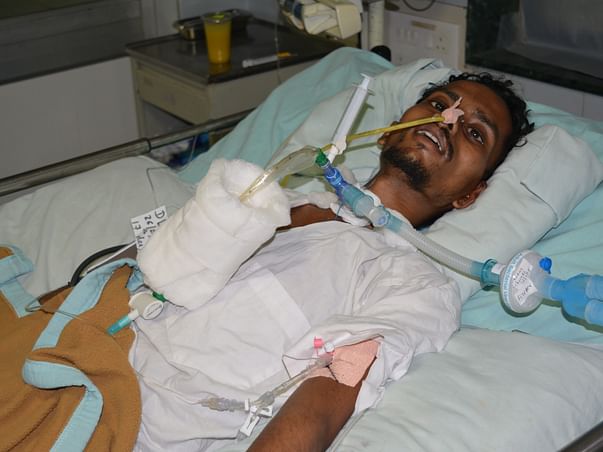 26 year old Sanjay suffers from Guillain-Barre syndrome and paralysis. He needs your support to stand up again!!

Sanjay Padhiyar is a 26 year old youth full of life & enthusiasm. He has a very positive approach towards a life. His large family lives in Ambav Village, near Aanklav in Anand district and consists of his parents, a younger brother, grand parents, his wife and a one and half year old child. Sanjay, his father and his brother Sunil work as daily wagers in the farms at Ambav village jointly earning Rs.8000 per month to support the family.

Sanjay's joint family has 8 members. Three of them work as daily farm wagers together fetching Rs 8000/- a month.

In early 2018, over a weekend, Sanjay went to his in laws' house at Vadtal to meet his wife and to play with his child. After a happy evening with them, while leaving Vadtal, he felt a slight weakness in the limbs but ignored it. The next morning, as he prepared to go to work, he felt sudden numbness in his body, as if he was losing strength rapidly. His father advised him to take rest on that day.

Nearly 4 months back, one morning Sanjay felt numbness in his body which spread soon.

However, the next day, the numbness had spread to major part of his body. His family members took him in an auto to Mahavir Hospital, Borsad 12 km away from their home, where he was admitted. After being kept for 24 hours under observation, as there was no sign of improvement, the doctor advised that he should be shifted to a larger hospital with better diagnosis and treatment facilities. Probably a neurosurgeon needs to  be consulted. Hence he referred them to Shree Krishna Hospital, Karamsad (which is managed by the Charutar Arogya Mandal). Sanjay was shifted in an Ambulance as his condition worsened. After the basic tests and examinations, he was diagnosed to have fallen victim of Guillain-Barré Syndrome virus and consequent paralysis. He had lost all movement in his body.

After a days treatment at Borsad, he was shifted to Shree Krishna Hospital and diagnosed as a case of  Guillain-Barré Syndrome  and consequent paralysis. He had lost all body movement.

After being kept in the ICU on ventilator and medication for 97 days since 11th February 2018, he has now been transferred to the Intermediate Care Unit. Treating intensivist Dr. Samir Patel says, “his condition is improving slowly and he needs more time to recover. His physical and mental trauma has to seen to be understood. He still cannot get up unsupported. So far we have given a 5 cycles of Plasmapharesis, mechanical ventilation and broad-spectrum antibiotics. We are doing as much as possible from our side”. His body movements are very slow and he is currently fighting all odds to regain lost movement of his body.He has yet to regain movement in his body below the neck portion. However, due to his strong will, one day he will be able to stand up again and walk independently.

After being treated in the ICU with ventilator support for 97 days, his condition is slowly improving and he has been transferred to Intermediate Care Unit (MICU).

Guillain-Barre syndrome is a rare but serious autoimmune disorder in which the immune system attacks healthy nerve cells of the peripheral nervous system. This leads to weakness, numbness, and tingling, and can eventually cause paralysis. The cause of this condition is unknown, but it is typically triggered by infectious illnesses like the stomach flu or a lung infection.

Treating ICU intensivist, Dr. Samir Patel, says that “ His chances of recovery are quite good, but it would take time, and hence the cost of treatment has shot up-to Rs 13 lakhs.”

His family has already spent almost all their savings in his treatment, but the bill is mounting. Sanjay needs your support to fight the virus and fully recover, so that he can once again support his family.

Each contribution is important! Kindly also share the fundraiser with your family and friends and help us to reach the goal amount. Your helping hand can offer the chance of a healthy life to Sanjay. In case you have any questions, or would like to know more, you can reach out on the below number: +91- 81419 33322