10-year-old Says “Let Anything Happen To Me, I Don't Want Hospital!" | Milaap

10-year-old Says “Let Anything Happen To Me, I Don't Want Hospital!" 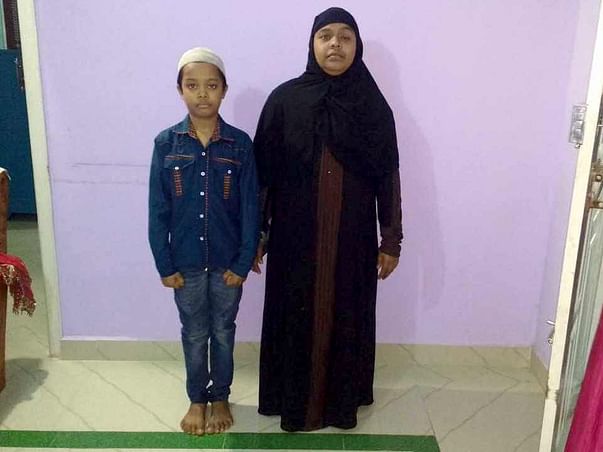 To everyone at school, Salman is just another naughty kid, much like themselves. He is hyperactive, loves sports, spends a lot of time with friends, and of course, whines about homework and tests. Once every month, Salman disappears. As far as they know, he goes to his relative’s place. The truth? He is in the hospital for blood transfusions so he can stay alive.
We were unaware that our son was born with a disease that is capable of killing him

When Salman of 2 years old, he had seizures. When Nayaz Ahamad (father) rushed him to the hospital, he found out that his son was showing signs of jaundice as well. Hospitals kept bouncing Nayaz from one place to another hoping to delve deeper into the issue. Finally, the parents found out that their 2-year-old was suffering from a rare genetic blood disorder that causes severe anemia.
“They said he had Thalassemia. It took us a while to understand what it meant. No matter how much blood Salman was given, he would still continue to have anemia and we would have to go back again for the same treatment. He was born with it, and we didn't even know.”

We can't always keep an eye on our son, and even if we are used to it, he can never get used to this life

It’s been 8 years since Salman was diagnosed. Nayaz rushes his son to the hospital every month for a transfusion. Although Salman is living a normal childhood, the father watches him like a hawk.
“He turns yellow. It is hard to miss. The minute it happens we have to run. If we don’t then the weakness, fever, pain and other symptoms might just turn everything worse.”
For Nayaz, life has become routine. If there is no blood available at the hospital, he donates for his son. Luckily for them, they are the same blood type.

A child shouldn't grow up in fear, we want to do everything we can to help him

Unfortunately, this life is a nightmare for Salman. Prolonged blood transfusions can cause severe side effects including shorter life span. If he doesn’t get transfusions on time, Salman may even lose his life. But the real trauma is on this child’s emotional state.
“He screams, cries, thrashes around each time we go to the hospital. Sometimes we have to lie to him. Sometimes we just drag him. It has to be done. This is his life at stake. He feels helpless. He says it is ok, let anything happen, just don’t take me there.”

Nayaz has a shop that repairs and sells seat covers for 2-wheelers in Kuppam. He makes Rs. 10000/month to care for his wife Shabina Begum, 10-year-old son and 8-year-old daughter, of which Rs. 5000 goes towards Salman’s medical expenses. Their daughter is a perfect HLA match for Salman. A bone marrow transplant can permanently cure Salman’s disease and give solace to his pain. 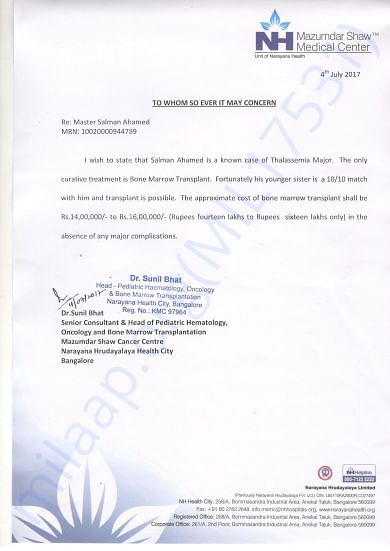 Report fundraiser
See how thousands are crowdfunding for their causes on Milaap
Rs.157,718 raised 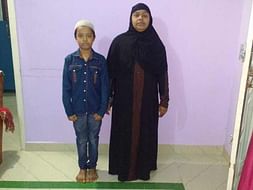 10-year-old Says “Let Anything Happen To Me, I Don't Want Hospital!"