This 2-month-old baby needs an urgent heart surgery to survive | Milaap
This is a supporting campaign. Contributions made to this campaign will go towards the main campaign.
This campaign has stopped and can no longer accept donations. 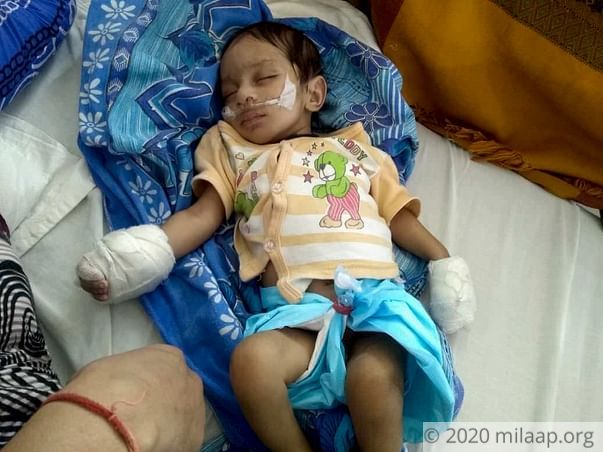 “We haven’t even named our baby because we’ve just been so busy running behind hospitals and seeking treatment. He is just 2 months old and has lost weight too. He needs a heart surgery in the next 6 days” – Kanhaiya, baby’s father

Kanhaiya and Monika fear losing their 2-month-old baby boy and are doing all they can to save him. Born on January 2, 2018, Monika’s baby has severe congenital heart disease and has a hole in his heart too. He needs a heart surgery in the next 6 days but the only problem is that his father, a sugarcane juice vendor, has absolutely nothing left to save him.

Kanhaiya and Monika were extremely happy with the arrival of their second child. At birth, Monika’s baby weighed 3 kgs. Just within the first few weeks, the baby boy wouldn’t breastfeed at all and would get very weak. He would also get breathless very fast and cry continuously.

But Kanhaiya and Monika’s happiness came crashing down when they learnt that their baby boy was born with severe heart defects. The 2-month-old is suffering because the roles of the 2 most important arteries of the heart were naturally switched resulting in a birth defect. In simple terms, instead of the oxygen-rich blood, his heart pumps the oxygen-depleted blood throughout his body.

The heart defect has caused severe pneumonia in the baby over the past few weeks. The 2-month-old’s oxygen levels are very low and since the past few days, the doctors kept him alive through oxygen support.


Monika holding her baby boy in the hospital

The baby has lost one fourth his body weight

Apart from the severe defect in his arteries, Monika’s 2-month-old baby also has a hole in his heart too. His heart is at high risk of failure unless he undergoes a heart surgery in the next few days. Since the baby had stopped breastfeeding, he’s lost a lot of weight and weighs just around 2.4 kgs.

“Any mother would be heartbroken if her child stopped drinking her milk. My wife would always tear up and isn’t able to watch our baby suffer anymore. We were told that the operation had a high chance of being successful and our boy could lead a normal life. What more could we ask for?” – Kanhaiya

Kanhaiya and Monika spent weeks running around in hospitals

“After getting the tests done, we were told that our baby needed surgery when he grew up and turned at least 2-months-old. We visited one hospital after another with the reports and some even refused to treat him saying that it was too risky. This was a difficult time but we finally found a hospital that can treat him.” – Kanhaiya

The parents had to travel 180 kms from their village in Alwar to Jaipur for treatment, leaving behind their 5-year-old son, Nishant. Now, after finally finding a hospital ready to treat their baby, Monika and Kanhaiya are already racing against time to get him the life-saving cardiac surgery but now they don’t have any money left.

With little time left, Kanhaiya and Monika are in dire need of help to save their 2-month-old boy. Kanhaiya is a sugarcane juice vendor who charges Rs 10 per glass. He earns Rs 9000 every month and apart from providing for his wife and 3 children, he also takes care of his elderly parents. He earns so little that it’s impossible to save anything. Still, he has managed to provide all the Rs 60,000 his baby needed for the treatments until now. He has exhausted all he had saved through hard work over the years and has nothing left.

The total estimated cost of the cardiac surgery is approximately Rs 3 lakhs. Monika, a housewife, and Kanhaiya simply, can’t afford such high costs on such short notice and have no other means left but crowdfunding.

Monika and Kanhaiya’s 2-month-old baby’s only hope for survival is to get the heart surgery as soon as possible. He needs the surgery in the next 6 days and his parents are running out of time to arrange the funds. 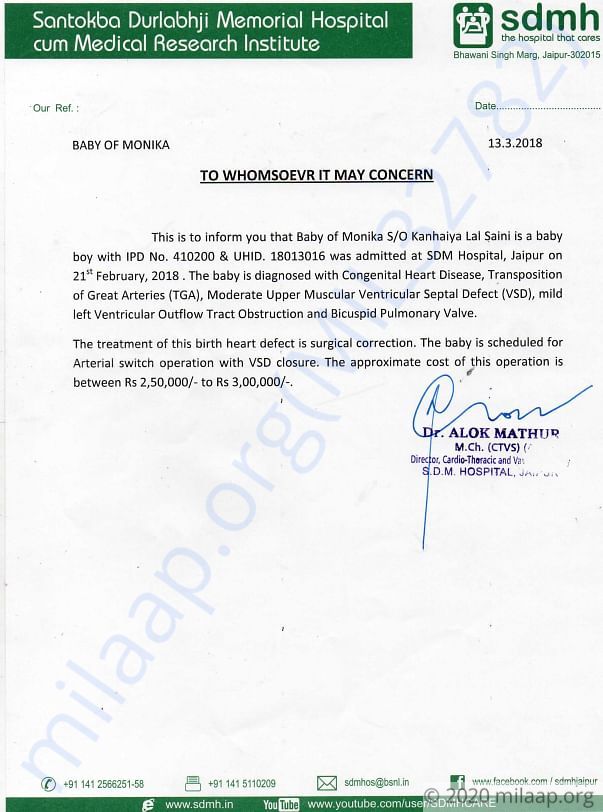 I have an update to share with you about my baby boy.

He still has severe brain infections for which he underwent an operation in May. After the operation he was discharged and sent home but he has not recovered completely. We have an appointment with a doctor in Alwar in a few days. This doctor has suggested that he should undergo an operation and a shunt will be placed in his brain. He is at home and receives treatment at a nursing home where injections are given to him 4 times a day.

Only after the check up will the doctor be able to decide when the operation is to be scheduled.

Please pray for my baby. He does not laugh anymore and is in a lot of discomfort all the time. We need your blessings now more than ever.

Here is a quick update for you.

The baby is still in the ICU and is under close observation. There is severe infection in her brain which has caused more complications.

Doctors are trying their best and there are some signs of improvement. They baby will be in the ICU for next 3 weeks.

Please pray for her health and speedy recovery.

Thank you for the love and support.
Regards,
Himani Sharma
Dear supporters,

The cardiac surgery of the baby was successful and the baby was recovering gradually but he got the infection two days back, so, the baby is shifted to pediatric ICU and is under observation.

Post TGA, VSD repair currently having meningitis cerebral oedema with respiratory failure and is on a ventilator since 3/04/2018. CSF analysis suggestive of bacterial meningitis.  Baby is showing slow improvement likely to be weaned off support by next week if stability persists.

You are sending a message to
Sai abhi prasan
Go back 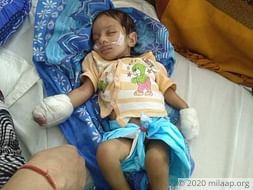