After Losing First Child To Cancer, Teachers Struggle To Save Son Now | Milaap
This is a supporting campaign. Contributions made to this campaign will go towards the main campaign.
Milaap will not charge any fee on your donation to this campaign.

After Losing First Child To Cancer, Teachers Struggle To Save Son Now 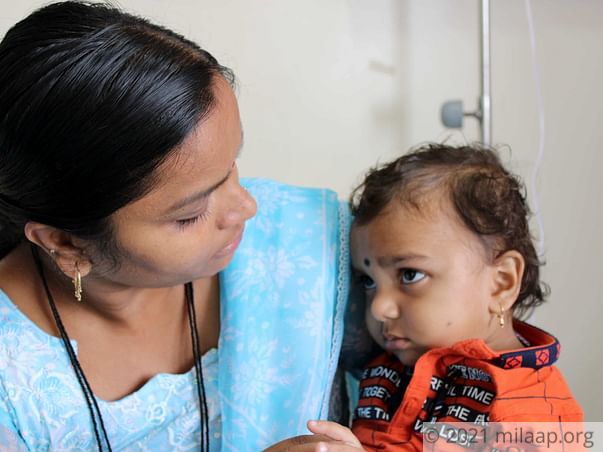 Every morning, baby Harshavardhana would wake up and run to sit on his toy cycle. He would then ride it around the house, while Malleshappa and Kavyashree followed him, taking turns to try and feed him breakfast. Their home was filled with Harshavardhana’s laughter, and every day, they felt grateful for their happy, healthy family. However, in July, Harshavardhana’s life completely changed.

“Just one month after he took his first steps, he started to limp. Now he can barely stand for a few minutes without being in pain. Earlier, every time we tickled his cheeks, he would giggle and curl up laughing, but now he doesn’t feel anything on his face. The tumour in his brain has paralyzed the right side of his face. We’re doing all we can to get him treated. But it’s not enough.” – Malleshappa, father

They lost their daughter to cancer, and years later, fate has brought them to the same crossroads

Five years ago, Malleshappa and Kavyashree lost their first child, Pratiksha, to cancer when she was just 1-year-old. The tumour in her heart had spread so rapidly before it was diagnosed, her little body gave up. Malleshappa and Kavyashree were beyond devastated. Their entire world had turned upside down and they spent the next few years struggling to overcome the unbearable loss. However, they finally found hope and happiness when Spoorthi (2) and Harshavardhana (1) were born. But little did they know that life would once again bring one of their children to the brink of death.


Harsha with his older sister, Spoorthi

“We don’t celebrate anything after we lost Pratiksha. She couldn’t make it to her second birthday, so we can’t bring ourselves to celebrate our lives. For Harsha’s first birthday in March, we just took him to the temple and prayed for his health. But now we live in fear of losing Harsha the same way we lost her. When we found out that he has the same kind of cancer that killed her, I was immediately reminded of those five months that she suffered. We're reliving the same pain all over again. "  - Kavyashree, mother

Baby Harshavardhana’s blood cancer was diagnosed in July after he had a cold, recurring fever and extreme weakness. Tests and scans revealed that he has a tumour in his brain, and soon, the right side of his face was paralyzed. Malleshappa borrowed from his relatives to take his baby from their hometown in Davanagere to Bangalore to start chemotherapy. Harshavardhana started treatment 10 days ago, and now, his facial paralysis has improved by 30%. However, he still has a long fight ahead of him. The 1-year-old needs six more months of chemotherapy to be free from cancer.

Malleshappa and Kavyashree are desperate to save their baby, but a dire lack of funds stands in their way

While Kavyashree stays with Harshavardhana in the hospital when he gets chemotherapy, Malleshappa travels from Davanagere every alternate night after work to be by his side. Malleshappa and Kavyashree are Kannada teachers in a school in Davanagere, but their income isn’t enough to afford the 9 lakhs required for their baby’s life-saving treatment.


Malleshappa often took Harshavardhana to the school where he teaches

“Nothing is above our children’s health. I will travel miles every night if I have to, I will do anything to save him. I can’t bear the thought of him having to suffer in pain, I can’t lose another child to cancer.”

Watching Harshavardhana reach his milestones was the greatest joy for Malleshappa and Kavyashree. All they hoped for is for him to be healthy and happy, but blood cancer threatens to take him away. Without chemotherapy, the helpless parents risk losing him just like they lost their first child. Harshavardhana can recover and have the childhood that his parents had hoped for him only if they can afford his treatment. Malleshappa and Kavyashree are desperate to save their youngest and can only do it with your help. 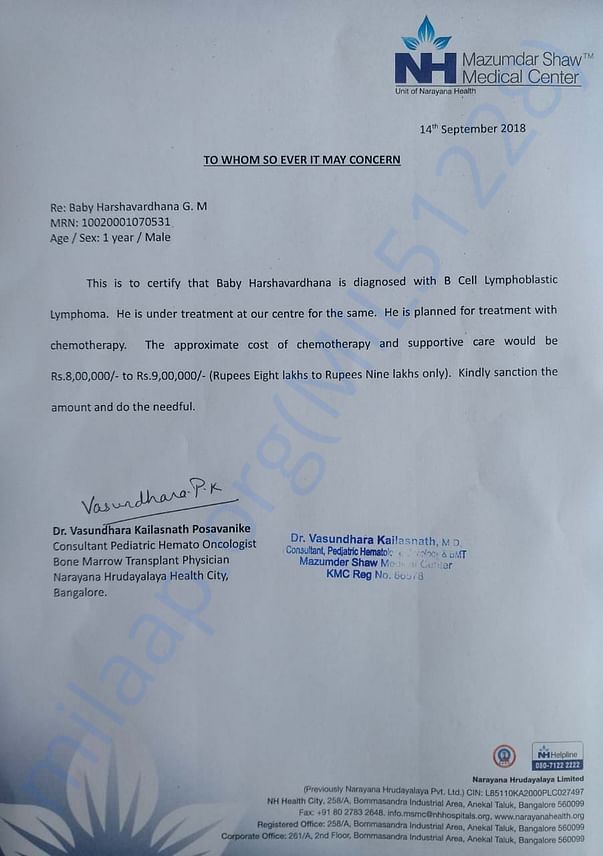 Ask for an update
Baby Harshavardhana G M is diagnosed with B Lymphoblastic Lymphoma. Presently he is admitted for Triple IT and Inj. Vincristine .He tolerated the treatment well and is being discharged in a stable condition.

Harshavardhana is presently admitted for his vaccination. He tolerated the vaccination well and is being discharged in a stable condition.

Harshavardhan is doing well. He came for followup checkups.

Scan & donate with any app
check_circle_outline Download payment receipt
Report fundraiser
Know someone in need of funds for a medical emergency? Refer to us
Rs.236,800 raised

Donated to this campaign via Bank transfer/QR Code? Click here if you can’t find your donation listed below.
MS
Milaap Srilakshmi Funds donated $3,200

You are sending a message to
Raviprasadh
Go back 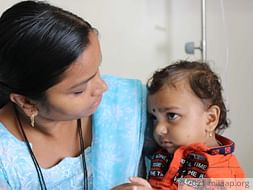 After Losing First Child To Cancer, Teachers Struggle To Save Son Now