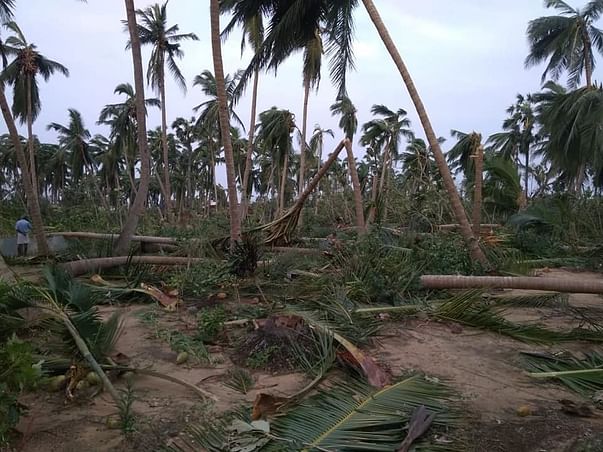 Share
Background:
A severe cyclonic storm, Gaja, battered the Tamil Nadu coast on Friday, leaving at least 46 people dead and causing widespread destruction. Authorities said the cyclone crossed the coast between Nagapattinam, Vedaranyam and Thanjavur districts between 12.30 a.m. and 2.30 a.m. with wind speeds of about 110-120 kmph.

My maternal ancestral roots are from Panchanathikulam, a village near Vedaranyam., which is one among the worst hit places by Cyclone Gaja.
When I reminisce my childhood summer holidays there with lush fertile land, mango orchards, vast cashew farms and acres of coconut farms, it is disheartening to see the uprooted tress and rotten paddy.
There are so many people in this slightly remote village where they haven’t even got candles. There is no electricity for the past 5 days and it will take some more days for the power supply to resume.
There are 120+ more families for whom we want to help directly with Tarpaulin sheets and cattle fodder in addition to the above mentioned items. A big thanks to everyone who contributed ! We are going there again.
If you wish to contribute, kindly message for more details.
Rebuild Plans:
On accessing the villages closely, we found that people are getting temporary relief materials but nothing which would help them in the long run. Farmers have lost the trees, on which they had been relying on for income. It would take at-least 6 years for them to get benefitted out of yields from new saplings.
We are aiming to uplift 50 households who have lost their livelihoods. Some families would need calves and some goats. I am still yet to get clarity on the numbers. Approximately, 7 Lakhs would be the sum we would be targeting.

Note: We are not taking up reconstructing or repairing damaged houses as people have either figured out ways to re-thatch the roofs or waiting for government aid for the same, while temporarily covering with tarpaulin sheets.
THE MORE FUND RAISED,MORE THE PEOPLE WILL BE BENEFITED
THANK YOU IN ADVANCE.
PS: we are not from any NGO or Organization. Just trying to help our native place get back on its feet with all the fertility and charm again.
Sowntherya Karthikeyan is the person who will be going in person for distributing the upcoming supply packages directly to the needy.