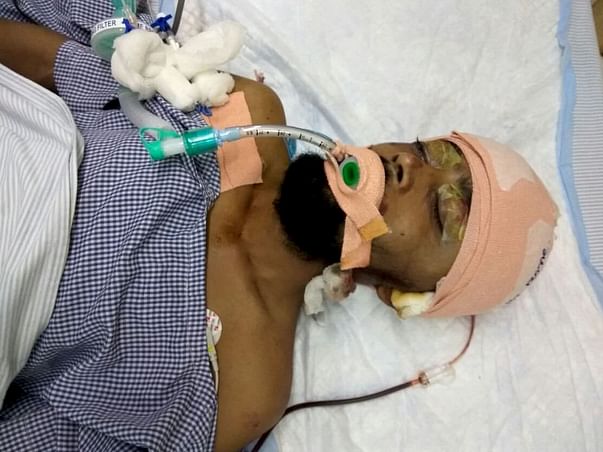 26-year-old Rashmi Ranjan is to be a father for the second time. On December 22, 2017, his 6-month pregnant wife, Subhashree was waiting for him to come home after a long day at work. Unfortunately, all she got that night was a call from one of the Ranjan's colleague. She was told that her husband was involved in a terrible accident and was in a nearby hospital in Bangalore. She was asked to get there in the next few hours.

By the time Subhashree reached the hospital, her husband was already inside the operation theatre. Her husband's friend took her through what happened in the brutal accident and the subsequent severe injury Ranjan has taken to his head.

"He worked as a tailor and was leaving for home. Since it was pretty late in the night, he called up a friend who had a bike, requesting him to drop home. They were coming home when a vehicle hit them from the back and the bike skidded. Being the pillion rider, Ranjan took the brunt of the fall," recalls Ranjan's friend, Vikram Mohanty.

Luckily for Rajan though, help was immediate. He was taken to a multispeciality hospital and was swiftly put under emergency care. He had multiple surgeries to reverse the consequences of the trauma. He was put on a ventilator. For few days, his condition stayed between critical and extremely critical. Chances of survival were minimal, but he has not stabilized.

"Treatment is ongoing, but the accident was severe enough to push Ranjan into a deep coma. The doctors are not sure when he will wake up. They say that they are doing their best, and now its all up to fate. His wife is 6-months-pregnant and running around the hospital, hopeless and worried. It is terrible that such a young family has to go through all this," says Vikram.

Ranjan Moved to Bangalore To Give His Family A Better Life

Ranjan is from Orissa and has been in Bangalore for few years, hoping to give his family a better life. His parents are elderly and still haven't come terms with their son's cruel fate. After taking loans from their neighbors, they have arranged for Rs 40,000. But sadly, this meager amount is not even close to enough.
Ranjan is still in a critical condition and his hospital bills keep mounting. He has a 4-year-old daughter and a pregnant wife waiting for him. The very reason why Ranjan moved to Bangalore has reversed, leaving his family at a complete loss.

"His wife doesn't understand much. She is from a village and hardly meets any one or speaks the local language in Bangalore. Every time a doctor comes to visit, she hangs on to every word, not wanting to miss any information about Ranjan's health. If she hears even a single positive thing about Ranjan's condition, she rushes to call her in-laws. But of late, I only see her crying. Things are very difficult for her in her state," says Vikram.

Ranjan is the only earning member and with him in a coma, the family is struggling to make ends meet. His friends are helping him but are still coming up short. So far, the hospital bill has crossed Rs 6 lakhs and is expected to reach Rs 10 lakhs soon. Though desperate to save him, his family has not been able to do much.

Your contribution can give this young father a chance at being able to raise his yet-to-be-born baby. Funds raised through this fundraiser will go towards his treatment.

UPI: rzpy.givetomlprashmira005@hdfcbank (Copy to clipboard)
Or
Click here to read the instructions before you make a bank transfer. 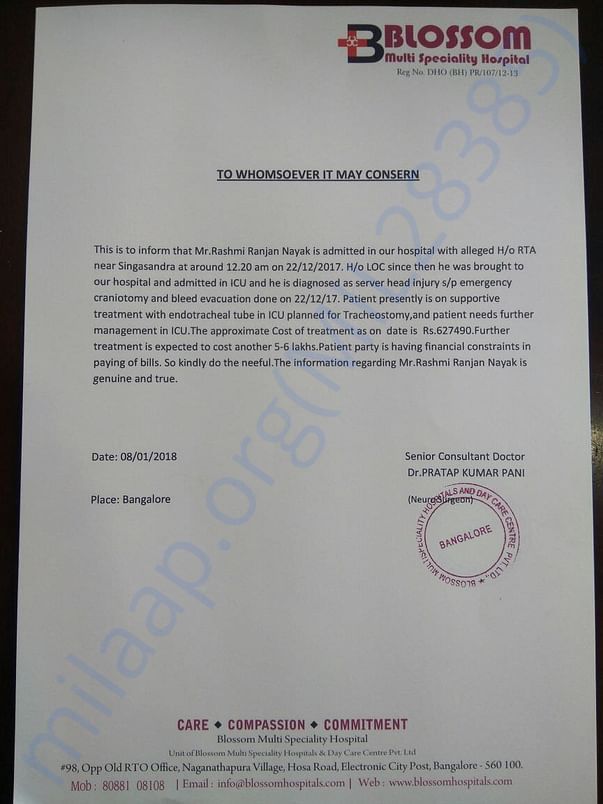 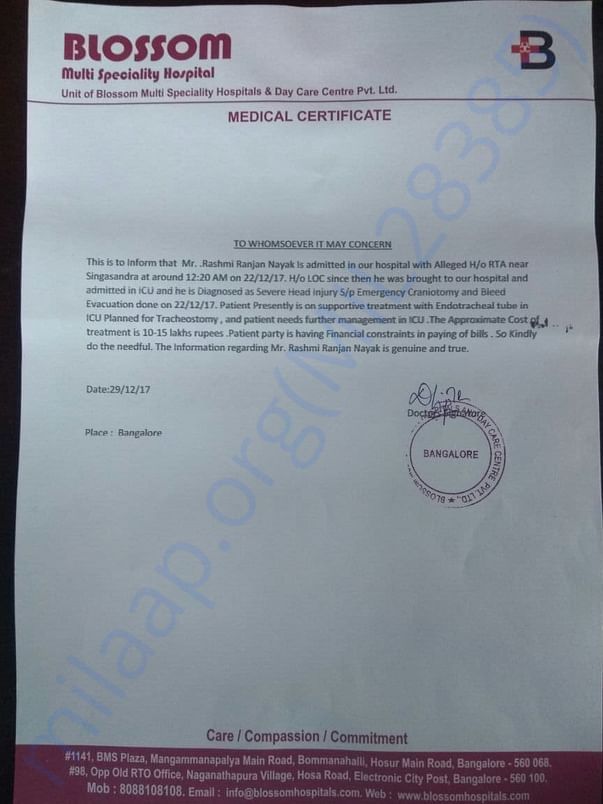 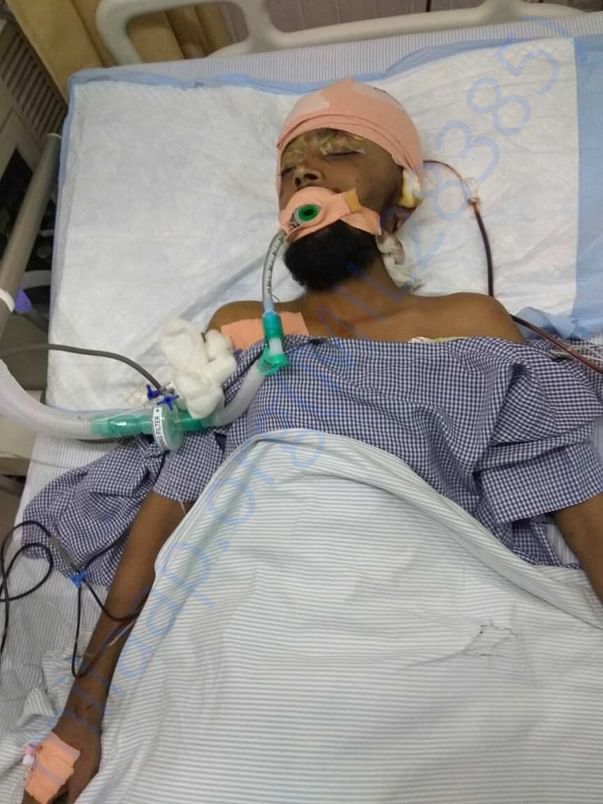 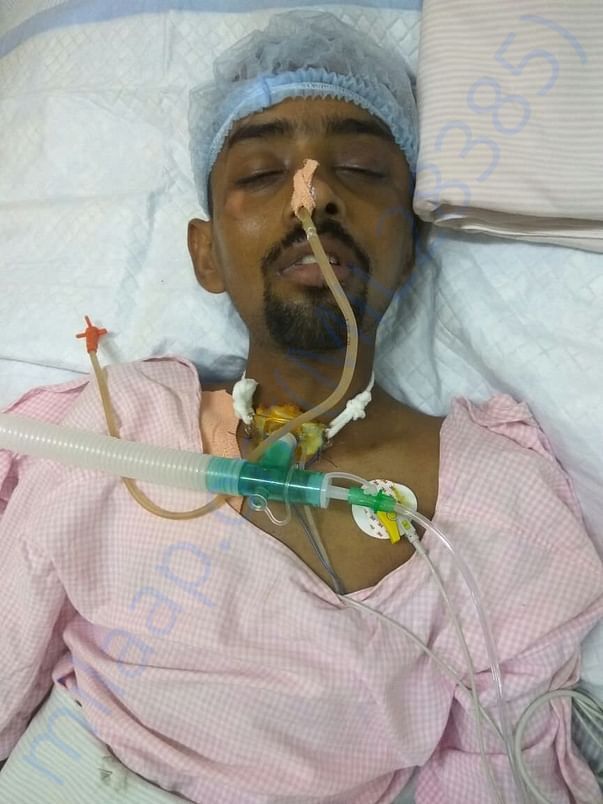 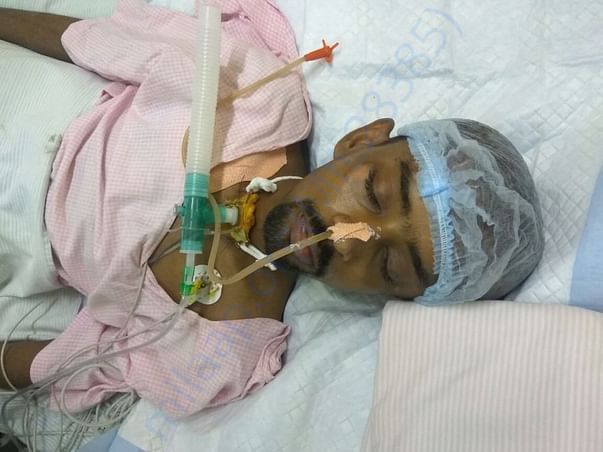 UPI: rzpy.givetomlprashmira005@hdfcbank (Copy to clipboard)
Or
Click here to read the instructions before you make a bank transfer.

Ask for an update
Donated to this campaign via Paytm or bank transfer? Click here if you have not received an email confirmation from Milaap.
Thank you for the support and contribution.  Rashmi is now recovering and has regained his consciousness.
Doctors are suggesting to take him to a homely atmosphere for his speedy recovery.

We will keep you posted on the progress.
Donate

I wish Rashmi recovers soon to be with his family.

I pray God get well soon

I wish Rashmi recovers soon to be with his family.

I pray God get well soon

SC
You are sending a message to
Smruti Chandan
Go back 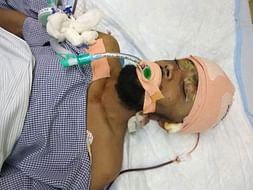