This 7-Year-Old Has Only Few Hours Left To Get A Liver Transplant | Milaap
This is a supporting campaign. Contributions made to this campaign will go towards the main campaign. 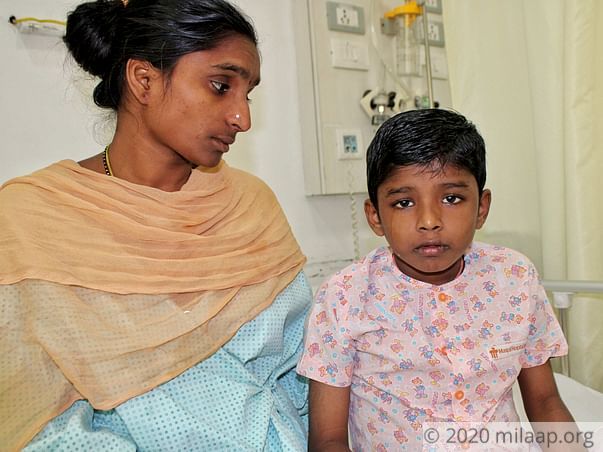 Kiran, an active and energetic boy was all excited about his new academic year. He came home with gleaming smile and was telling his mother, about everything that he was taught at school. His mother was brimming with pride and was hopeful about his future. But the next day, Kiran was unable to get up from his bed and had a high temperature. Despite the fever, he tried to attend his classes but the weakness in his body didn’t allow him to.  Poor Madhulatha did not even remotely think that it could be something serious but to her shock, he was diagnosed with a liver disease. He’s been going through excruciating pain for the past 5 months. Now it has become worse and he has only few hours left for the transplant without which he will lose his life.

Kiran was just like every other kid enjoying his sweet childhood

“Kiran used to be very active. He was so enthusiastic to go to school that he would be the first one to get up early morning. And soon after coming from home he would sit with his brother Karthik (4) and watch his favourite cartoon on TV. He never had any serious illness before and he always looked happy and healthy.” - Madhulatha.

Kiran was just promoted to 2nd grade and it gave him immense joy reading his new books and making new friends in his hometown Janapadu, Andhra Pradesh. But just a day after he started going to school, he started having fever. Madhulatha thought it was just a common flu and gave him some medicines after taking him to the doctor. But Kiran wasn’t getting any better. After several trip to the local doctor and the symptoms still showing prominently, Kiran’s parents were advised to take him to Hyderabad, Telangana for better consultation.

“Will I ever be going to school again?”

After a few tests, Kiran was diagnosed with Wilson’s disease, a condition that causes higher than normal amounts of copper to accumulate in the body. The disease has completely damaged his liver, due to which it doesn't release copper into bile as it should. This copper buildup leads to severe damage to the kidneys and other vital organs it if is not treated on time. Kiran’s stomach is extremely swollen because of which he constantly cries in pain. He doesn’t even eat food fearing that he might vomit. Though it was a relief for the parents to know that Madhulatha was a suitable donor for the transplant but lack of funds stands in their way.


“I think my son knows about his condition and the only thing that he asks me is, ‘Amma, will I ever be going to school again?’ Each day he lives in constant fear of losing his life and not a day goes without crying. He knows that he will get better after the transplant and asks me when will he get operated. I don’t have the courage to tell him that we have no money left for the transplant.” - Madhulatha, mother.

Madhulatha and Paparao works as farmers earning Rs 300 per day which is barely enough to look after his family. To save his son from this dreadful condition Paparao used all his savings and even sold his two buffaloes which was their only source to earn extra income. He has spent around Rs 6 lakhs for the medical tests and treatment. Madhulatha and Paparao have stopped working for the past 3 months just to look after their son. And now having no source of income to afford a life-saving transplant that costs Rs 25 lakhs, Paparao is devastated, he says, "My son has been going through a lot for his age. I will fail as a father if I don’t save him. Please help me."

All Kiran wants is to go home and start going to school but his failing liver has kept him from a happy childhood. His parents tried every possible way to meet the transplant expenses, but all their efforts have gone in vain.

UPI: givetomadhulatha2@yesbankltd (Copy to clipboard)
Or
Click here to read the instructions before you make a bank transfer. 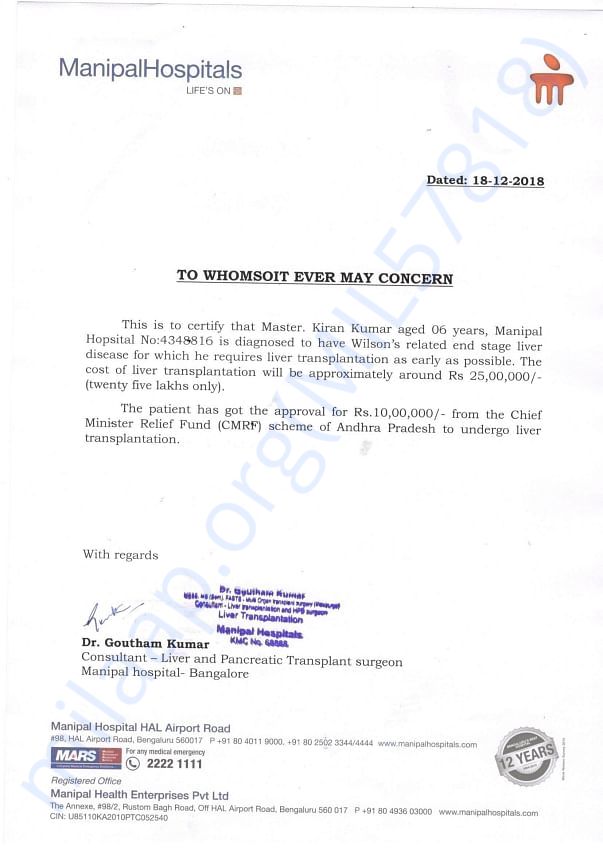 UPI: givetomadhulatha2@yesbankltd (Copy to clipboard)
Or
Click here to read the instructions before you make a bank transfer.

Thank you so much for your love and support. The kid has undergone the transplant and is doing well. He is currently at home and is discharged from the hospital.

Donated to this campaign via Paytm? Click here if you can’t find your donation listed below.
P
Puneet donated Rs.151

Donated to this campaign via Paytm? Click here if you can’t find your donation listed below.
P
Puneet donated Rs.151

You are sending a message to
Neeraj
Go back 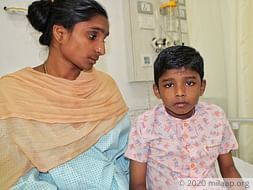