WHAT DO WE DO? 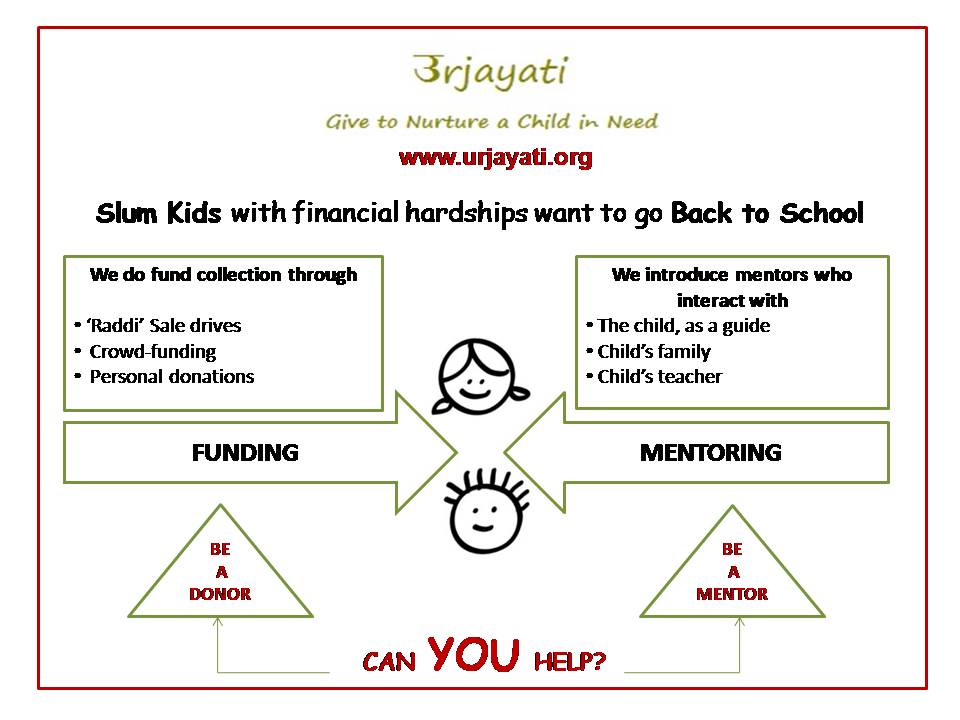 FOR WHOM ARE WE DOING THIS?

What if in a matter of a few months your circumstances changed so drastically that you got evicted from your house, had to drop out of school, start working as a housemaid, and still not know where your next meal was coming from? That’s the story of Poonam Shinde.

14 year old Poonam bears the burden of being the eldest child of an impoverished family of 5. Till last year, her mother was the only earning member in the family because her father keeps coming and going – he has a parallel family he chooses to live with in the village. Last year, her mother gave birth to their fourth sibling, and things went downhill from there. The mother lost work as a domestic help due to the pregnancy and even after the heavily malnourished child was born, she could not hold a job due to her failing health. Poonam and her 12 year old brother Anand dropped out of school so that Poonam could work as a housemaid and Anand could become a delivery boy for a sabziwala. Rent and bills piled up, they got evicted, and they had to move houses twice. Currently they live in a jhopri where they don’t even have a fan.

Both kids have been out of school for almost a year now. The mother has finally resumed working but her monthly income of INR 3,000 is not enough to sustain the whole family. Last time we visited them in the slum in Versova, Mumbai, the youngest child – only one year of age – was eating just sugar for ‘lunch’. The older kids have even had to take to the streets to sell pens. Currently, the kids collectively earn INR 5,000 a month by babysitting and working as domestic help. They want to go back to school, but cannot. Not until we can compensate for the loss of income they will have to bear if they go back to school. They have been through a very traumatic year. And you can help them to return to school, and a life of normalcy with a small donation.

And theirs is not an isolated case.

As per India's Census of 2011 for Mumbai and Thane regions, approximately 1.01 million children in the age group of 5-17 years are out of school.  This is because 0.4 million children have dropped out of school, and 0.6 million have never been to school at all. Of the many reasons responsible for these alarming figures, financial hardship is one that surely cannot be ignored.

In our experience with kids from the municipal schools and slums in Mumbai, we noticed that many children from low-income families drop-out of school. Or don’t go at all. Or try to manage work and school together and compromise on their education. Often they are in this position because they have to work to support their families. Or look after a sick relative or younger sibling while the parents are at work. Or simply because they cannot even afford the monthly transport cost if the school is far away.

Project Urjayati is an initiative in Mumbai and Thane to financially sponsor such kids so that they can go back to school, and to mentor them so that they don't drop out.

If you are wondering how we are different from other organizations who do this type of work – we don’t aim to BE different, we aim to MAKE a difference to the lives of the children, to whom others have not been able to reach out yet.

Project Urjayati is an independent initiative by three Gandhi Fellows.
We are three women in our mid-twenties who, till a little over a year back, were immersed in college degrees, foreign exchange programs and corporate jobs with MNCs.

For over a year now though, we have been working with 32 municipal schools and their surrounding slums in Mumbai and Thane, with the NGO Kaivalya Education Foundation.

We have each spent a month living in the slums of Mumbai with the children we work for. (you can read about our experiences of one month of living in the slums at http://the-mobiustrip.blogspot.in/2014/08/bombay-slum-immersion-first-impressions.html )

We have also spent a month each working at labour jobs with the parents of these children.

All of this, so that we could understand their problems and help in our own small way.

And so, Project Urjayati was started.

HOW MUCH FUNDING DO WE NEED?

In the two months since we started the project, we have 10 kids under our wings.

In the next two months, we plan to reach out to 10 more kids at least.

We reach out to mentors for the kids through pamphlets, where we incur printing and distributions costs.

We also conduct Raddi Collection and Sale drives, which is a fund raising event for us. This includes marketing and logistical costs. Our first Raddi Sale helped us raise Rs 5,000 in one day, with the help of which we kick-started the process of sending back 8 kids to school.

We are also hosting a website www.urjayati.org through which we invite personal donations.

Every lit bit helps. You would be surprised to know that some children are missing out on education because their family can’t afford the INR 160 per month that they have to pay for a bus pass to take the child to school from a remote area.

You can help us send a child back to school, instead of to a labour job.