Pedal For Peace | Milaap
This is a supporting campaign. Contributions made to this campaign will go towards the main campaign. 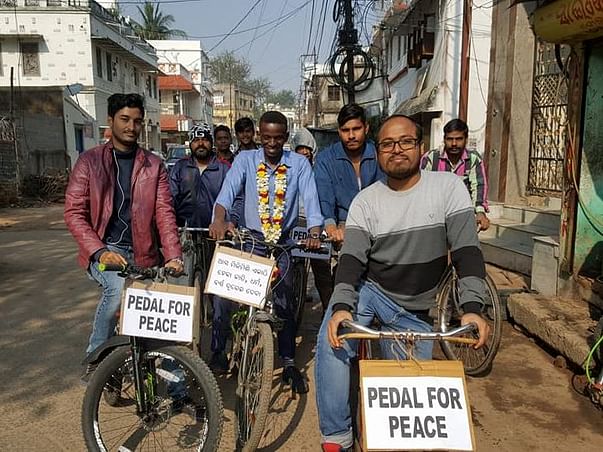 My Personal annectode
While traversing across the mystical realms of Incredible India, my spirit is enriched by a multitude of diverse experiences, opportunities, and people. Am absolutely in love with this country, its warmth, flavors and hospitality.However, sometimes am faced with overwhelming situations, where I suddenly becomes the cynosure of all eyes, drawing unintended attention from the locals, who glare at me curiously yet innocuously. I am often addressed as “Negro”, which offended and agitated my mind initially but after allowing it time to settle, I see things more rationally, culturally and empathetically owing to realization and identification ofa clear gap in knowledge between the Indian Sub continental and the African communitiesabout each other’s culture and beliefs.Incidentally, incidences of altercations between the Indian and the African communities, apparently provoked by Racial prejudices are on a rise causing this gap to grow into a chasm which if not bridged soon, will become insurmountable.
Advocating Cultural Inclusion
Advocating for cultural inclusion to bridge the knowledge gapAm on a mission to address this gap and ascertain the deeply embedded reasons for the growing friction between the two communities. The core objective moreover is to acquire a deeper understanding and broader perspective on the 3R’s associated with racism, “Racism: Reality,Reasoning and Response”. Consequently, this campaign involves achieving the same through a multitude of human interactions which will result in acquiring an empirical understanding of the reasons for the growing acrimony between the two communities.
As a part of the campaign am travelling across India on a bicycle while interacting and interviewing people along the way and recording their responses through the means of Videos and textual documentation. The campaign will include travelling 7000kms.
Besides, another salient feature of the campaign is conducting workshops/seminars in educational institutions in 12 cities across 14 states en route.The information collected will be analyzed, shared with the respective consulates and used to propound a solution for mitigating the situationand further fostering Indo-African bonds of friendship and brotherhood.
How will your contribution be utilized?
Till now, I have been able to cover 2675km in a mspan of 32 days, and we have been able to conduct 12 workshops in various educational institutes across the country advocating for equality and peaceful coexistance.
During this time, I have been selected to represent Kenya at UNESCO Tech Conference to Transform Humanity in India on 16th - 18th Dec 2017.
Moreover, I have been selected to be a part United Nations winter conference starting from 13th - 17th Feb 2018 at United Nations headquarters in New York. Am therefor seeking your support to help us reach the core objective of this campaign.
Cost Breakdown
Finishing the campaign: 60 days
Food:                    Rs 40,000
Lodging:               Rs 48,000
Miscellaneous:    Rs 12,000
Travel to the United Nations
Visa Applications:  Rs 20,000
Return Ticket:         Rs 100,000
Food & Lodge:        Rs: 80,000
Total Amount:        Rs 300,000

Some of the media coverage 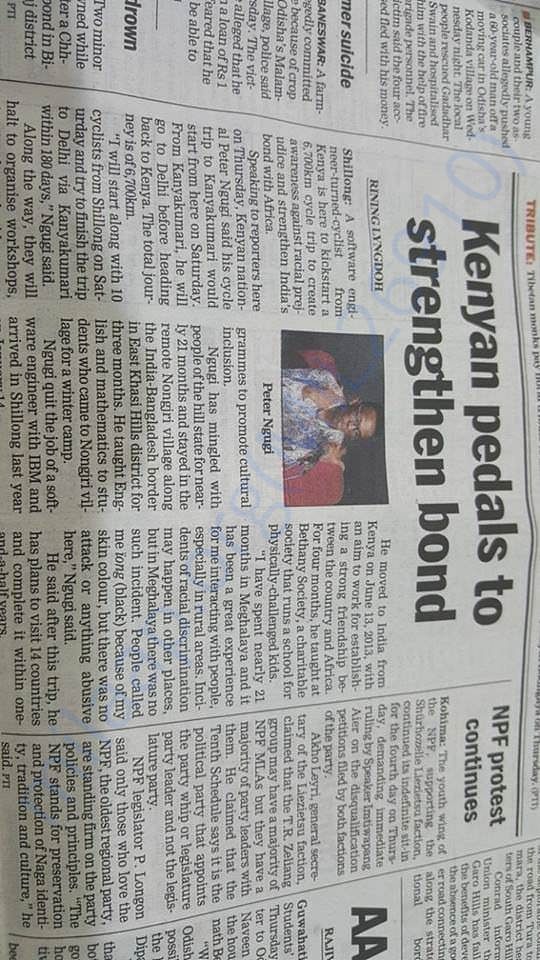 Campaign Progress
Pedal for Peace remains to be one of the most successful campaigns ever in India to fortify IndoAfro Relationships. There has been tremendous and massive support from the Heads of High Commission in New Delhi and also looking to work closely with the Ministry of External Affairs in India to further achieve the intended goals of the campaign which is to bring peace and promote cultural inclusion.

I would like to extend my heartfelt gratitude for your support in making this campaign a success. Am hereby attaching a letter by the Kenyan Gov approving the success of Indo-Afro relationships and further recommending it for partnership with the United Nations.

Thank you for the support.
Donate

SG
You are sending a message to
SK Ganeshkumar
Go back 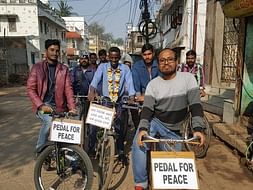