One Lakh Fund for Farmers | Milaap
This is a supporting campaign. Contributions made to this campaign will go towards the main campaign.

One Lakh Fund for Farmers 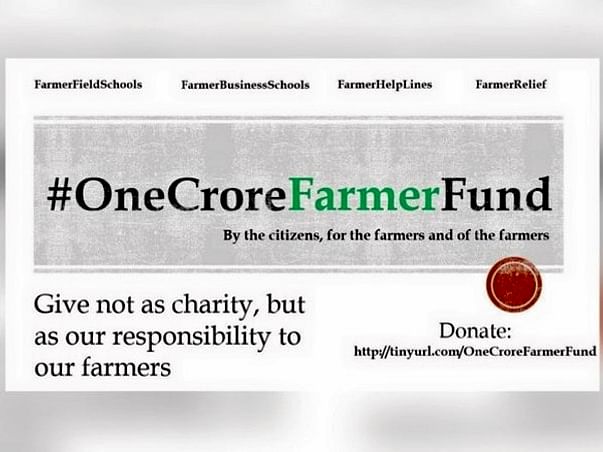 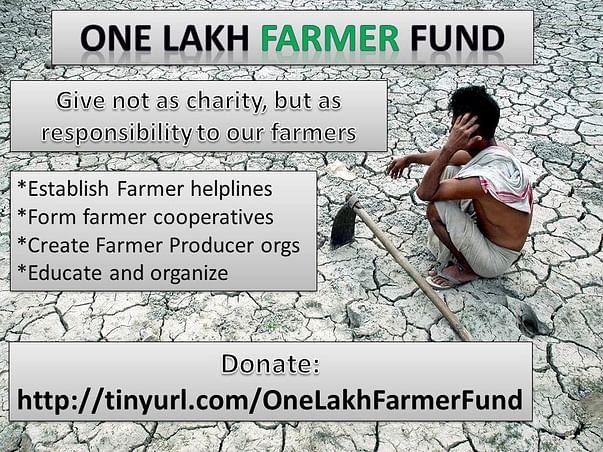 Previous Next
I have started a support campaign to raise 1 lakh rupees to go towards the main campaign of raising 1 Crore rupees started by my friend Suresh Ediga. Please help me reach my goal of One Lakh Rupees to help our farmers in distress. Once we reach our goal, we will be working with Center For Sustainable Agriculture to support our farmers.
Which organization will the money be directed to?
Center For Sustainable Agriculture , a not profit organization registered in India with FCRA status. CSA has been working extensively across different states in India and providing both long term and short term solutions.
A one pager explaining the various initiatives that will be supported as part of this fund raising campaign
For the big question - where and how would this money be used?
The focus will be in the states of Andhra, Telangana, Maharashtra, Tamil Nadu given our reach in those states. This section will be updated as we are able to crystallize this information further.
An 8 year old's letter titled "A farmers difficult life" perfectly captures the harsh reality of the farmers and their crisis

"A farmer doesn’t have enough of water, sunlight, big farming land, money, seeds, fertilizer and things. Sometimes a drought hits. Not enough water, but too much sunlight.
Sometimes a farmer didn’t have enough money to buy seeds to grow crops. How will they grow the crops? When the crops do grow the farmer will take the to the market but half way through the plants are half destroyed. They walk for nothing, something or they might succeed. We have to help farmers in India.
I grew 1 bean and it took work and patience. Farmers do so much work. We should put our heads together and do our part. We all need food so help the farmers."
Message: Help is on the way"
The letter ends on a positive note that help is on the way. This is exactly the intent behind this effort. To create a 1 crore fund to serve the needs of farmers in distress.

We have a solid network of volunteers, NGO's on the ground across the different states in India and through them we intend to reach out to the farmers, identify those in distress and be proactive in our approach to offer help.

Such an intervention will allow us to avoid the situations that push the farmers into a further deepening crisis.

So can you please join in this effort
FAQ?
1) But why 1 lakh?
Ans) 1 lakh is not a small amount and also not a big amount either in the overall scheme of things. However, this is significant enough to take up activities that are sustainable in nature.
This money will be a direct contribution to the main campaign OneCroreFarmerFund started by my friend Suresh Ediga.
2) Give examples of any success stories?
Example: 1
Name of the village: Adivi Cherlopalli
Mandal: Vempalle
District: Kadapa
This is a predominantly SC village and the government had allocated lands to them, but almost all of the 80 acres was barren land, completely uncultivable. After multiple visits and persuasion, the women in the village agreed to try organic horticulture plantation.
The agreement was that the farmers form a co-operative society, instead of working as individuals. After utilizing all possible government subsidized schemes for providing water (bore wells), electricity and drip irrigation facilities, each farmer is bound to pay Rs. 6000 per acre from their pocket.
Unfortunately, all these families are daily-wage laborers, hence Rs.6000 per acre is difficult for them to manage and banks cannot lend loans for them without any security. We contributed Rs. 3000 per acre and farmers have to bear the rest of 3000. This will encourage the community farming and they are going to have better bargaining power with the banks, government schemes and while selling their produce as a co-operative society.
This was almost a year ago. Since then, the cooperative has been formed and the bore has been dug, electricity connections has been approved and are right now awaiting the lines to be installed. The goal is to start cultivation this season.
Example #2
Tribal villages: Umri, Zari, Shekguda, Kosai, Kapperdevi, Mandaguda, Dahegama
Mandal: Talamdugu
District: Adilabad
These 5 villages were identified as vulnerable and poverty-ridden due to their heavy dependency on private loans for cultivating cash-crop, Cotton. Tribal villagers from villages are depending on private lenders, right from Cotton seeds, fertilizers, pesticides and their family expenses. They have to buy all their food products, because they only grow Cotton. All the private lenders were charging 36% - 48% as interest for their loans. This was affecting them severely, and they have no option but commit suicide, if a crop fails.
We worked alongside with CSA on a project in these villages to move them from input intensive cash crop, Cotton, to suitable food crops. To begin with, CSA helped farmers who came forward with the local hybrid seeds, instead of costly B.T. seeds. Central Institute of Cotton Research (CICR) develops these seeds suitable for the soil. CSA procured seeds from CICR and distributed them to the farmers in these villages. This helped them reduce the seed pricing from Rs. 1800 to Rs. 150 for each 300gms packet.
CSA conducted trainings to the farmers on how to prepare their organic fertilizer and pesticides, so that they can spray these instead of costly pesticides from the money lenders. This worked out quite well during the first year itself, as farmers saved money on the seeds during the drought season. In the year 2, CSA introduced intercrop (Red gram) along with Cotton.
While they are practicing organic farming, they were able to produce organic Red-gram as an intercrop CSA procured the Red gram through Sahaja Aharam store and paid good money to the farmers. This actually helped farmers, when the Cotton crop failed due to drought conditions and lack of rains during the critical period, so they were able to save Red gram. This year (year-3), farmers are being encouraged to form co-operative societies in these villages, so that they can be eligible for government subsidies and other schemes. Red gram will be encouraged more as a main crop as well as intercrop, as Cotton cultivation need to go down this year.
Also, a plan is being developed to make these co-operative societies as Farmer Producer Organizations, so that they can produce Soybean seeds, as Adilabad soil is suitable for Soybean.

UPI: rzpy.givetomlpfarmersi007@hdfcbank (Copy to clipboard)
Ask for an update
Donated to this campaign via Paytm or bank transfer? Click here if you have not received an email confirmation from Milaap.
For COVID relief efforts, we are utilizing the proceeds from the previous campaign
Project #1:
Provide a comprehensive 2 week training to the farmers and the grassroot volunteers working alongside with the farmers on various aspects of farming (blog has more details)

Here is one farmer from Maharashtra wrote back to me as feedback for the session. He found the session extremely useful and was keen to implement this in how own village Incidentally he also won the panchayat elections , so there is a very good chance to work more closely

The training was conducted by CSA (Center for Sustainable agriculture) in Hyderabad over the course of 2 weeks. The training was attended by 20 people, including 8 farmers 6 agriculture students 6 grass root level volunteers (Students are not in the picture)

As part of the training they attended farmer field school, the farm in Enabavi village (model village for organic farming) and had discussions and interactions on other concepts of farming, including FPO’s
Also had sessions on pest control, insecticides

The farmers and the grassroot level volunteers liked the sessions and they found it extremely useful. They did have feedbacks which will help in future such sessions

While, I’m still collecting feedback from all the participants, wanted to share the initial feedback with all the donors and supporters of this project Also thank you everyone for your generous contributions. Thank you to Ramanjaneyulu GV and the entire team of CSA for conducting the training sessions

Providing financial support to SahajaAharam (sahajaaharam.in) to procure produce from farmers in different villages via FPO’s and their by providing the farmers a better price. Please find the details of the procurement

Project #3:
Kisan Mitra Helpline, a helpline and sometimes the only lifeline for the farmers in distress. I've listed more details about the helpline below. A grant of Rs 2 lakh was provided for the helpline in order to help sustain some of their activities.

All this put together, we have disbursed about 18 lakhs of funds. I resumed the fundraising again this year, with the hope that we can reach the elusive 1 crore goal.

This will help us establish a fund for the farmers, which can then be utilized to provide zero percent interest loans for the farmers. The modalities of the fund will be shared accordingly.

Just as a quick one liner
We only managed to raise about 20 lakhs. Out of this

16 lakhs were allocated to two projects
1) farmer field school - a 14, day hands on training by CSA for about 15 farmers
2) help Sahaja Aharam buy directly from farmers across several fpos to maximize the profits to the farmers

2 lakhs were sent to the Kisan Mitra helpline, as a way to help sustain their activities

The remaining is what I raised in the last year.. So we have closed to 2 lakhs unspent

Donated to this campaign via Paytm? Click here if you can’t find your donation listed below.
A
Anonymous donated Rs.5,000
S
Sravan donated Rs.1,000

Long live Suresh Ediga...I'm with you sir and thanks a lot for raising this campaign. Never felt more happier

Donated to this campaign via Paytm? Click here if you can’t find your donation listed below.
A
Anonymous donated Rs.5,000
S
Sravan donated Rs.1,000

Long live Suresh Ediga...I'm with you sir and thanks a lot for raising this campaign. Never felt more happier

You are sending a message to
Imtiaz Syed
Go back 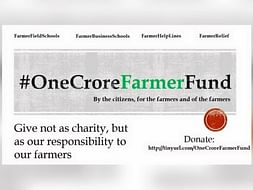 One Lakh Fund for Farmers