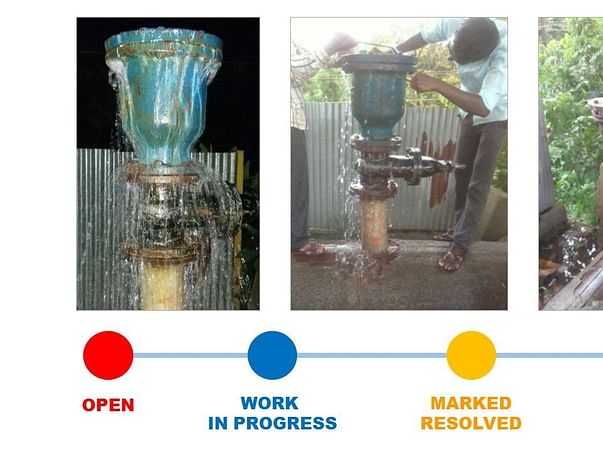 Does it annoy you when you accidentally drive over a pothole or when you see garbage littered on the streets? Even if you have grown up with these basic problems, it is not something you can get used to.
Now think !!!...do you use Facebook and Twitter to get them resolved? Nope! We don't.... simply because Facebook & Twitter were not built for this specific purpose.

Our Story
Back in 2007, there were local government elections held in Pune. I was standing outside the voting booth and was staring at the piece of a paper stuck on the wall. It was a simple list of all candidates but the only thing written on it was the name of the candidate and the name of their party. With this little piece of information I was thinking of whom to vote for, for a brief moment I felt ashamed for not knowing about them but I also learned that most of my friends were equally ignorant, some of them didn't even bother to vote that day.
A month later I decided to do something about it. I built a prototype for a website but I did not like the idea of browsing through a politician's profile. I mean, seriously... who does that? Not unless the person is a leader of a prominent party or an inspiration to many like Shri Narendra Modi. But what about the local corporators/councillors, nobody knows about them and yet most of the issues we face could be resolved by them and by the local municipal body.
Years passed by but I couldn't find a neat solution to this problem => How do I bridge the communication gap between us and our politicians to exchange our views and get our issues resolved?

The AHA Moment
In 2011, smartphones arrived in India and I bought one. I was fascinated to see its ability to capture location and picture, that was my eureka moment which hatched the plot for NetaG a year later. I was committed to my day job and was simultaneously working on another startup.
In December 2013, I quit my job and launched the first prototype of NetaG on Play Store. We got covered in the The Indian Express, thanks to Garima Mishra (Feature Editor), the one who believed in me when all doors were shut.
However, the app did not take off as I had anticipated…. And there, I learnt one important lesson
*********IF YOU BUILD, THEY WON'T COME*********
So I started talking to people directly to get their feedback and kept building to suit their needs (only if it aligns with our mission). After multiple failed prototypes I went into stealth mode and summed up all my learnings to relaunch an MVP in January 2015. It was relatively successful and caught the attention of multiple newspapers like The Times Of India, The Indian Express, Forbes, Zee News and Yourstory bit.ly/1K2VoQ3.
So what is NetaG?
It is a location based smartphone app that connects you with politicians and government officials to get your civic issues resolved and helps you to share your views in an accountable and transparent manner.

What makes it awesome?
Real Life Example
In January, 2015, a seventy year old, uneducated women wrote about her problem in Marathi without anyone's guidance, within 5 days her problem was resolved by the local corporator. To learn more about this issue read here - http://bit.ly/2ceOoYU or download the app and open this link - www.netag.info/issue/144
Heart of the problem
We tried to learn about the local politician’s point of view in serving the public and were happy to see that politicians are very eager to help and resolve civic issues but sadly they were unaware of the problems in real-time.
They cited the following reasons
Our Mission
Our primary goal is to bridge the communication gap between common man and their politicians to help resolve issues and understand people’s views/opinions in real-time. Our AI (Artificial Intelligence) backed backend systems generates analytics, actionable data and important insights about people’s interests, views and issues based on their category, criticality, frequency and impact. This helps politicians and government bodies to plan, prioritize and track issues in a systematic & productive manner.
Our ‘Open Dashboard’ (coming soon) will provide a transparent and accountable view of progress made by consecutive governments and parties which will help people make a rational, calculated decision while voting for candidates in upcoming elections.

Achievements
We are one of the 'Top Ten Hot Tech Startups' selected by Nasscom & Facebook on the Young Turks programme ‘CODE FOR THE NEXT BILLION’ hosted by Shereen Bhan.
http://on.fb.me/1TqnhbL.
For our innovative approach, we got covered in several prominent newspapers and TV channels like YourStory, Times Of India, Zee 24 Taas (live interview), Mid-Day, Indian Express, Forbes India Magazine, Sakal Marathi, Saam TV.
Where are we now?
From simple issues like street lights, potholes, garbage littered to dealing with complex issues like removing illegal mobile cell towers & pan shops from school vicinity, politicians are actively monitoring and resolving issues to aid common citizens.
With 4800+ users, 400+ politicians and more than 35% issues resolved, citizens as well as politicians are making the best use of our platform to engage and make a change.
At present, we are operating in few parts of Pune only. With the help of your contribution we will be able to ramp up our team and technology to support other cities as well.
Funding - How will we use your contribution?
Goals Timeline
About Our Progress & Expenditure
Communication, Transparency and Accountability are the three pillars on which NetaG is built. These are very much part of our culture. We will keep you updated about our progress through vlogs and blogs. Follow us on twitter to check out our updates.
Our Contact Information
Email : contact@netag.info
Twitter : @netag_inc
Facebook : fb.com/netag.inc
Instagram : netag.inc
Youtube : https://www.youtube.com/channel/UCC2GsA5iIBaUJpclyQvjZSw