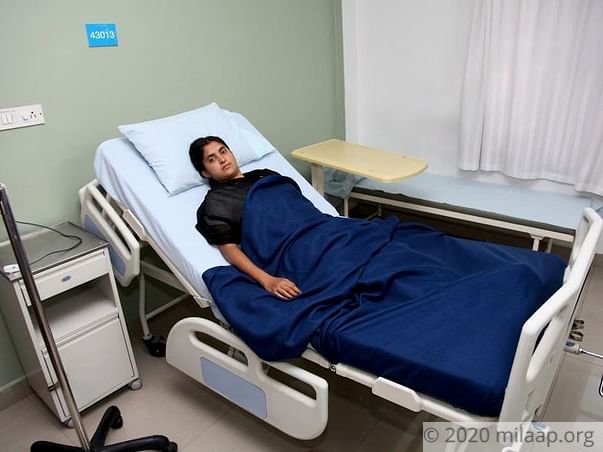 Najama feels like she has been sick for most of her 4-year-old Amin's childhood. She has been suffering from pancreatic cancer for the last 2 years. Despite three surgeries, and medicines, her cancer has shown no signs of receding. Even though she has only been hearing bad news about her cancer, Najama is determined to fight – her son is too young to lose his mother.

Pancreatic cancer strikes without any symptoms and is very hard to detect in the early stages. For a whole year, Najama only had mild stomach pains. The lump in her stomach was finally detected only two years back. It was diagnosed as cancer only last year. Since then, her life has been endless visits to the hospital.

“We got three surgeries done, but all of them failed. She is weak and the doctors say she needs treatment that will melt the lump in her stomach. Najama cries and feels hopeless, but every time she thinks of Amin and decides to be strong.” explains her brother Salim.

Salim is talking about radiation therapy that is Najama's only option. Najama is in her mother's house in Bangalore for the treatment. Her child and husband Chand live in Ramanagara near Mysore. Every time Amin gets upset he cries and looks for his mother. But slowly, he is getting used to having no one around.

Chand keeps juggling between visiting Najama, caring for his son and going to work and earning money for expenses. He lost his earlier job and now works as a waiter in a canteen in Ramanagara earning Rs 300 for every day of work. Everyone in this family has made big sacrifices in the last two years.

It is time for Amin to begin school. After spending over Rs 10 lakhs on Najama's surgery, Chand has nothing left to even pay Amin's fees. It was something he and Najama had looked forward to for their only child. With Najama in Bangalore getting treated, Amin's school admission is no longer the big occasion it once was.


“I feel like time has stopped and we have only lived in this desperate situation for years. Even my young son knows that his mother is very sick – even if he doesn't understand it. I try to visit often, but even one visit is just too expensive. It really hurts to be poor when your family is fighting death,” Chand says.

Even day to day expenses is getting very hard for Chand to manage. He feels like he has lived in a constant state of fear for the last two years. He needs to make sure Najama gets treated but has nothing left to save her with especially because he is living in debt from loans taken to treat her over the years.

This family has been fighting a desperate situation for a very long time. Najama needs urgent chemotherapy and radiation, but her family has no way to pay for her treatment. 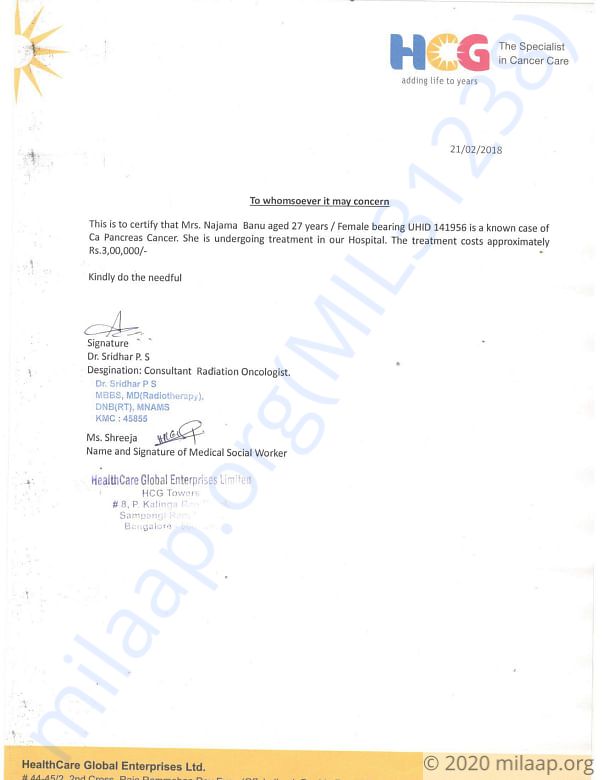 Ask for an update
Donated to this campaign via Paytm or bank transfer? Click here if you have not received an email confirmation from Milaap.
Dear Supporters,
Thank you all for your tremendous support!

Najma is now back to her normal life and she has recovered well. She keeps following up with the doctors but there has been no complications so far.

Our family is extremely happy and they thank each one of you for the love and support which you has shown towards her.

Thank you so much for your valuable support. We really couldn't have come this far if we didn't have your support.

It gives me immense pleasure in informing you all that Najama successfully completed her 5 fractions of cyberknife treatment under Dr. Sridhar. She has been discharged and she is in good health. No further treatment has been suggested by Doctor. Though she will be vising hospital for her routine checkup once in a month.

Thank you again, everyone! We are falling short of words to express our gratitude.

Currently, she is at home and undergoing medical management. She is doing fine as of now but she needs to undergo chemotherapy and radiation as soon as possible since the surgery is not possible as doctors have advised it is inoperable.

We will visit the hospital at the earliest so that her treatment can be initiated.

We cannot describe in words how grateful we are to all of you for the love and support you have shown Najama.

Thank you once again. Please pray for her health and speedy recovery.

Report fundraiser
See how thousands are crowdfunding for their causes on Milaap
Rs.402,779 raised

i need mobile number of patient and confirmation of receival

i need mobile number of patient and confirmation of receival 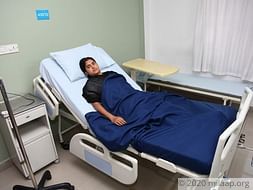