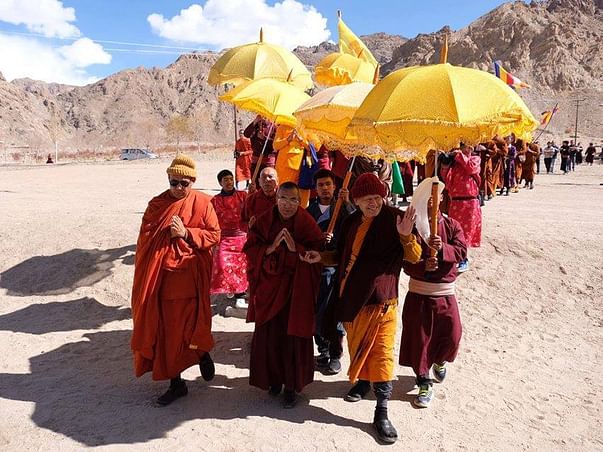 Share
Mahabodhi International Meditation Centre (MIMC, Leh, Ladakh, is a non-governmental, non-sectarian, non-profit-making, socially-engaged Buddhist charitable organization established in 1986, on a 250-acre stretch of barren cold desert land 10 kilometers from Leh.
Mahabodhi campus is currently home to several hundreds of people, including aged citizens, visually-impaired children, monks, nuns, meditators, volunteers, and school children. Over the past 30 years we have managed, but not without considerable effort and perseverance, to transform this barren piece of land into a heaven-like oasis, with greenery and the most incredible people.
Quite rightly, the campus of MIMC is today known as "Devachan" (Abode of the Divine). Through the course 30 years, thousands of people of all ages, have directly and indirectly benefits from the various services offered at the Mahabodhi Devachan campus. MIMC's singular and compassionate vision is to serve the deprived and disadvantaged people of Ladakh- one of the most remote and environmentally challenging regions in the world. Besides these social and humanitarian services, MIMC has also been proactively involved in peace-Building and culture preservation programs through inter-faith conferences and dialogues at the national and international level. MIMC at present is home for more than 1000 inhabitants.
The Dhamma Pad Yatra (Walk for World Peace in The Himalayas) beign organized since 2014 has gained interest and appreciation not only from the people of Himalayas but Worldwide. This Peace walk has helped in strengthening the spiritual and cultural relationship between the beautiful Buddhist Country Thailand and the people of the Himalayas. This peace walk is organized every year under the guidance & leadership of most venerable Phrateppariyatti Thongsuk, Governor of Ecclesiastic Province of Singburi, Thailand. No doubt this peace walk has resulted in promoting World Peace through the beautiful message of Lord Buddha, the Universal Loving Kindness and Compassion.
This year this Peace walk from Dharamshala will reach Leh on 26th June 2019. Apart from helping in the maintenance of world peace, this peace walk will also help in preserving the Buddhist cultural heritage of Himalaya.
THE PURPOSE

Ladakh has been a prominent highlight and a renowned destination ion the Indian tourist map. The place is full of immense vibrancy and diversity of cultures, nature and lifestyles. The uniqueness of Ladakh and the whole of Himalayan region must be preserved to ensure that the region continues to be a source of eternal enlightenment in people’s lives.
A JOURNEY TO SPREAD THE MESSAGE OF PEACE AND GLOBAL HARMONY
With an aim to spread the message of peace, humanity, love and harmony across the globe, 200 pilgrims will be taking a long walk “Pad Yatra” through the Himalayas towards Ladakh.
The Fourth Consecutive Pad Yatra of more than 200 monks and nuns from Thailand will be organized and conducted for the goal to spread a message of love and communal harmony across the globe. A special delegation of monks and nuns from Thailand will embark on a journey of divine connection with the nature and reach the Mahabodhi International Meditation Centre in Ladakh and get to meet Venerable Bhikkhu Sanghasena.
The Pad Yatra Highlights -
The “Pad Yatra” will initiate from Bodh Gaya and via Dharamsala will enter the Ladakh region where it will conclude at the Mahabodhi International Meditation Centre. The delegates from Thailand, monks and nuns will walk barefoot all the way. They will get to interact with His Holiness The Dalai Lama at Dharamsala.
The yatra will endure its way through the Himalayas and ultimately conclude at the MIMC in Leh, Ladakh. For a fourth straight time,the participants will get to explore the diverse cultures and landscapes along the way and this yatra will be a golden opportunity to further reinforce India’s ties with Thailand.
Discovering true divinity!
The group of 200 monks and nuns will be able to boost their spirituality and will gain enlightenment. The yatra will send a message of communal harmony, global peace and love. The yatras conducted so far have played a key role in enhancing the diplomatic and religious ties between Thailand and India and this year as the number of participants will be higher, it will further lead to mutual prosperity, happiness and triumph for both the nations which have always played a vital role in promoting peace and harmony in the region.
Mahabodhi International Meditation Centre, an initiative of Venerable Bhikkhu Sanghasenais dedicated towards its mission of promoting the Ladakh region as a prominent spiritual and tourist destination. The religious and humanitarian services being offered at MIMC have made Ladakh emerge as a prominent region among the South East Asian countries.
At the final stage of the yatra, a special traditional reception will be organized at the Mahabodhi International Meditation Centre to facilitate the enduring efforts of the yatris. The members from Thailand will be facilitated for their successful Pad Yatra.
If you wish that the Pad Yatra be a successful initiative to foster peace, harmony and love across the globe, then do contribute as per your convenience towards funding this grand initiative and offer your role in the dedicated intentions of the participants by donations.