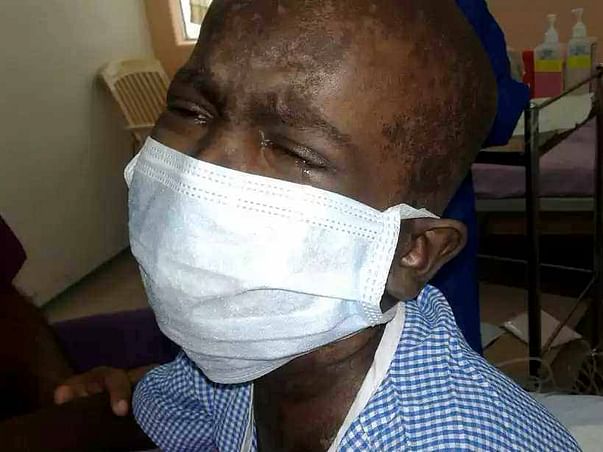 “We have come here from Sri Lanka to save our son’s life but we are scrambling to keep him alive with no support system here.”
10 years old, Mithun has lived in pain for as long as he can remember. He was looking forward to the bad times coming to an end when the doctor proposed a bone marrow transplant as a cure for his blood disorder. Everything was looking fine until a complication during recovery has him battling for life again. This time, he needs to fight with all his might to survive.

Crossing nation borders to save a 10-year-old

Gamini and Ramya are a couple from Sri Lanka. They have been caring for their ill son, Mithun for 10 years on a very small income. They were a happy family until Mithun started showing symptoms of weakness when he was 6 months old. His hemoglobin level kept dropping and the parents found out that he had Thalassemia, a blood disorder that causes severe anemia in the body.
“Mithun has had over 200 blood transfusions so far. He keeps getting infections. Over the years, he has had frequent fever, cold, cough and more. It has been so tough for him to stay in restricted environments. We had to keep him away from playing outdoors, eating outside, going on vacations and more. He would even miss school sometimes because of this.”

This would be the answer to all his problems

Each blood transfusion took a toll on the family both mentally and financially. They had to watch him like a hawk as the minute he would start showing any signs of fatigue, he needed to be rushed to the hospital for a blood transfusion without which his condition would only deteriorate.
“This is no life for a child. He cannot grow up this way. It is a huge burden. So when the doctor gave us the option to go for bone marrow transplant, we jumped on it.”

Things did not work out quite the way they had imagined

Although they could not afford it right away, Mithun’s parents collected funds from everyone they knew, liquidated their savings and came straight to NH Bangalore where he had a bone marrow transplant in May.
“After he was discharged from the hospital, Mithun fell sick again. We had him admitted again where he was diagnosed with Graft Vs Host disease. His body is rejecting the transplant and he did not respond to the first line of treatment due to which the doctor is giving him a stronger therapy.”

27 lakhs to keep away their worst fears

Mithun needs to be in the hospital for about 6 weeks, and in India for 6 months. The medicines for second/third line therapy are quite expensive. His family is not able to afford this especially after exhausting all they had on the transplant. They now need Rs. 27 Lakhs and have nobody to support them.
“He is always crying. He is in pain and even now does not know what is happening. He only understand a little bit of the language. So he is panicking more when the medical team tries to talk to him. I keep telling him everything will be fine and we will go back home. I don’t think he believes me. He thinks something terrible is happening to him.”
Mithun needs your help to save him from his worst fears.
Estimation Letter 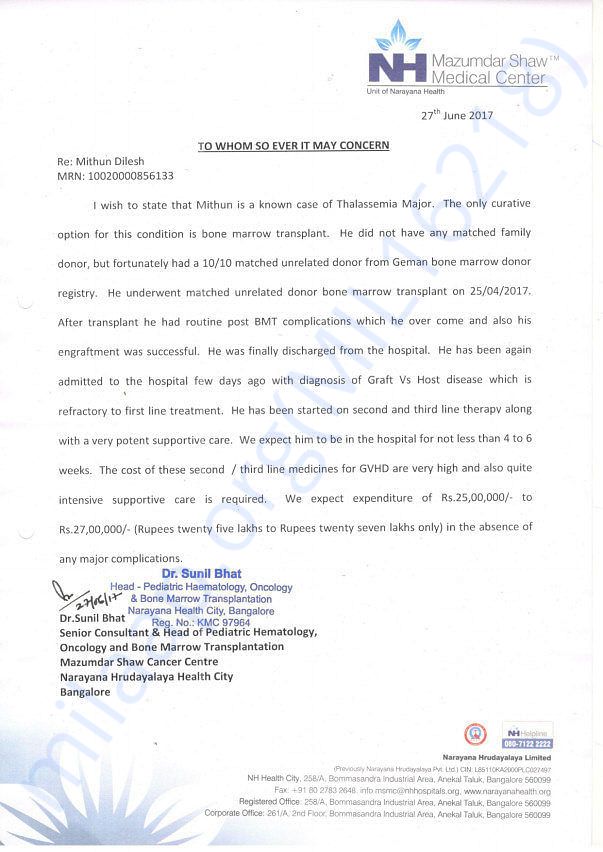 Report fundraiser
See how thousands are crowdfunding for their causes on Milaap
Rs.229,277 raised

Donated to this campaign via Paytm? Click here if you can’t find your donation listed below.
SM
Saraswathi donated Rs.500
A
Anonymous donated Rs.500

Donated to this campaign via Paytm? Click here if you can’t find your donation listed below.
SM
Saraswathi donated Rs.500
A
Anonymous donated Rs.500 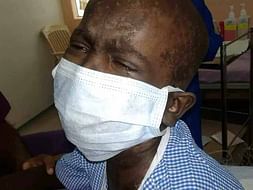