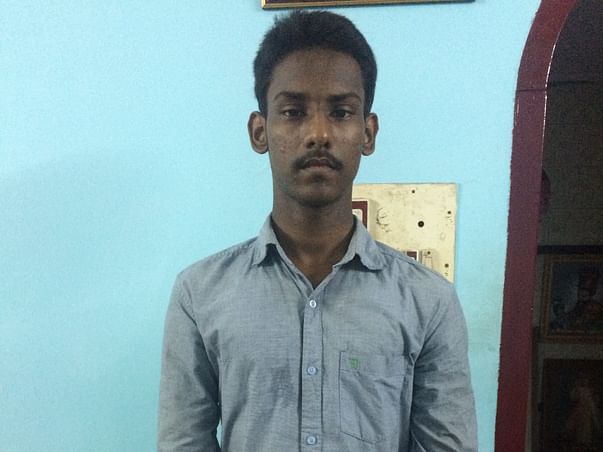 Marian Berry Floyd is 18 year old male child, who is born to Mr. Sahaya Babu and Mrs. Flora Mary, they are residing at Otteri Chennai and he has two younger brothers one is in class 9th and other is in class 7th. His father is a coolie worker, working in a private Packers and Movers Company called Grace Packers and movers and earn Rs.300 per trip. His income is not stable, he goes to his job when he has called for work and he is the only earning person in his family. His mother is a house wife.
He comes from a very poor economic background, underprivileged family and uneducated parents. He studied in government undertaking school called ELM Fabricius Higher Secondary School, Chennai-7, he is the first rank holder in all his classes from LKG to 12th standard, he got the school first in his 10th standard with 422 marks and as well as in 12th standard with 812 marks in science first group. He continued his studies without any assistance education support like tuition, coaching classes etc.., because his father didn't have that much money to support his education, even though he brought up in a underprivileged family without even a proper food daily. He had the willpower to study and score high marks. Even his brother’s score first rank in all their classes.
His dream is to become a doctor and help the society, other children like him to get a degree which they would like to get. He has chosen LVIN National Medical University General Medicine MBBS MD college, Ukrain because they are the top most educational center over 150 years and they have specialised faculties, classes is been taken in 1:7 ration, that is for 7 children 1 faculty. So, concentration on each child is more and tthis college is mainly based on practised more than theory.
These many years he has studied because of the help from their church and other donors help. Now since he has applied for MBBS, he wants a big donation to support his education. Making his dream come true is in the hands of the potential donors who are going to help him and of course, none of this would be possible without the generous support from the donors. It would be grateful if you could support his education and life up a CHILDS life.

Donate
0%
Be the first one to donate
Need Rs.23,00,000
Card, Netbanking, Cheque pickups
Or Donate using