When 30-year-old IT employee Shubha (name changed) had irregular bleeding and discharge for 6 months, she approached the doctor. She was diagnosed to have a very small lesion on the cervix and a biopsy confirmed that she had cervical cancer. But Shubha refused to take the doctor's warning seriously. She wanted to have a child and opted for an alternate therapy (Unani medicine). After 12 months of treatment, she came back with an advanced stage of cancer. It was difficult to witness her suffer from cancer which she could have easily prevented. She was young, energetic and a confident IT professional but after her cancer became advanced, she lost her dignity as people were not able to sit in the same room because of the foul smell emitting from her tumor. She came back with her mother to the doctor, pleading to do something to save her. Even with best efforts and therapy, she died within one year.
Shubha is one among the many women who suffer and die due to lack of awareness regarding cervical cancer and its screening. Cervical cancer is the only preventable cancer among all female genital cancers and India tops the world list of this cancer

Cervical cancer is the fourth most common cancer in women worldwide with a large majority (around 85%) of the global burden occurring in less developed countries. There were an estimated 266,000 deaths from cervical cancer worldwide in 2012. Almost nine out of ten (87%) of these cervical cancer deaths occur in the less developed regions of the world.
The rate of invasive cervical cancer has dropped by more than 50% in developed countries over the last few decades. It is now the twelfth most common cancer in women in the UK and fourteenth in the USA. This decline in the incidence of invasive cervical cancer as well as improvement in survival can be attributed to regular screening of women with the Pap smear and the availability of a vaccine in recent years.
The situation in developing countries such as India is different. Cervical cancer is still the most common type of cancer and the leading cause of death among genital cancers in rural India. The data that is available in India is based on hospital based cancer registries - actual community data about the incidence of cervical cancer is lacking. Availability of such community level data would give an accurate idea of the magnitude of the problem.
The realization that the majority of these cancer deaths can be prevented by early diagnosis and implementing an effective screening program prompted a group of committed people to set up the Mahati trust in October 2011. We, at Mahati trust, set out on a mission. We wanted to conduct a large scale community level screening of women in the rural areas of Karnataka state in South India. This would allow us to estimate the true incidence of cancer cervix in rural Indian women and also to extend life-saving preventive and early detection services.
We have worked incessantly in the villages of rural Karnataka (Chikkaballapur District to be precise) over the past 4 years. We completed screening in 3 PHCs (Muddenahalli, Nandi and Nayanahalli) and covered 100 villages, have conducted 205 screening camps so far, screening 15066 women, collected 8431 pap smear samples; of these, 137 women tested positive and were subsequently directed to receive the appropriate treatment. Of these, 27 had invasive cervical cancer - an incidence of 185 per 100000 women. This is alarmingly higher than the WHO estimates of 21.99 cases per 100000 women!
Having worked at the grassroot level, we now realize the possible magnitude of the problem. We also have an idea of the hurdles that impede provision of screening services and treatment. This makes us believe that we need to double our efforts to keep the service going.

From the inception till now (4 years), we were systematically conducting screening programs village by village in each PHC of Chikkaballapur district and were able to only cover 3 PHCs as on March 2016. Chikkaballapur district has 64 PHCs overall. In order to continue and increase the coverage of screening, it’s necessary to have parallel programs and parallel teams conducting the screening programs atleast twice a week. Mahati Trust is a self-funded trust and sustainability of these programs becomes next to impossible without constant flow of funds. 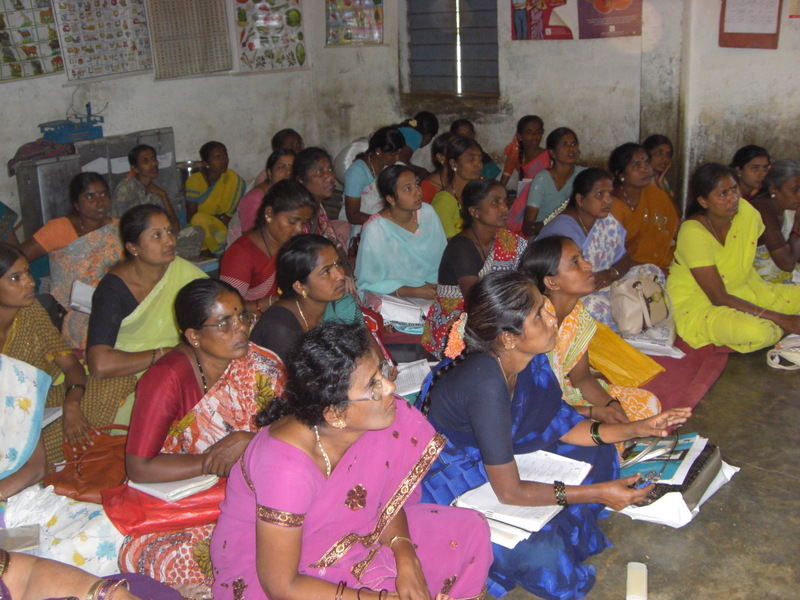 The overall expenses include
- the transportation costs to travel to these PHCs which are approx 100 kms one way from Bangalore
- Salaries to the team
- Cytology reading expenses to be paid to Kidwai (per slide)
- Medical equipment to carry out pap smears (Speculums, Pap kits, Slides, gel, gloves etc)
- Remuneration to the medical team that travels to the villages every week
- Administration, documentation charges and miscellaneous charges.
We would like to cover two more PHCs (60 villages approx) in this year 2016-2017 and any financial help would go into executing this task.

A. A local coordinator is employed from Chikkaballapur and it is her objective to give awareness door to door in the villages with the help of the pamphlets we have created.
Q2. How often are these screening camps conducted?
A. Currently the camps are weekly (4/a month)
Q3. How are the positive cases identified?
A. The pap smear slides are sent to Cytology department at Kidwai Institute of Oncology, Bangalore. The cytologists read the pap smears and provide classification as normal and abnormal. (LSIL, HSIL and Carcenoma)
Q4. What happens to the women with positive report?
A. The women are brought to MS Ramaiah hospital, Bangalore for further evaluation and treatment at no cost.
Q5. What is the plan for urban areas?
A. For now, we have restricted ourselves to have just awareness talks in urban areas. We conduct awareness talks in Corporates, Govt schools, Mahila sanghas and residential communities.