5-year-old Affected With One of The Rarest Diseases Needs Urgent Help | Milaap
This campaign has stopped and can no longer accept donations. 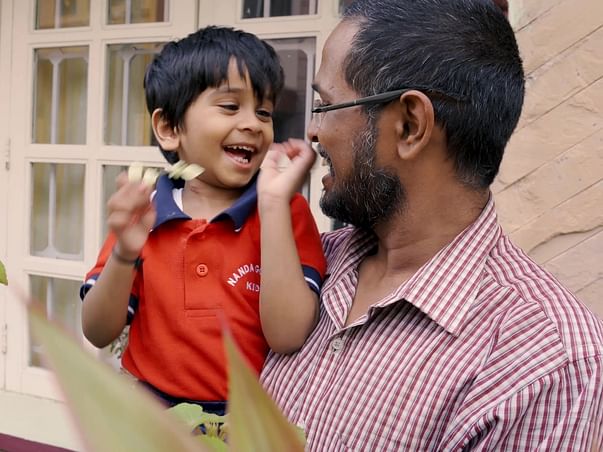 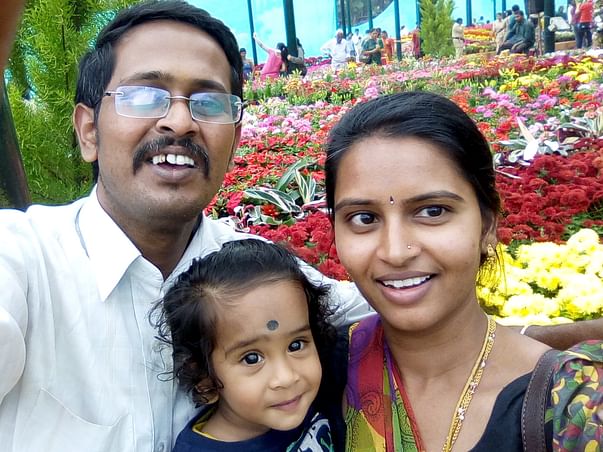 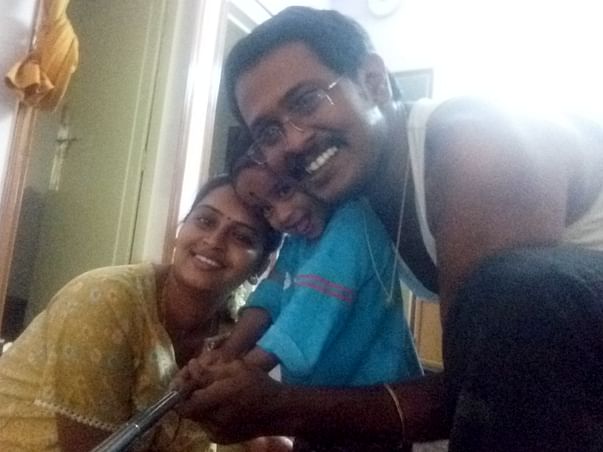 Previous Next
It all started when Likhit was just 2 years old. His parents saw that his pillow was covered in blood and baby Likhit kept gargling. He had started bleeding from the gums. Likhit is 4 years old now, but the bleeding hasn’t stopped. He has a disease that is so rare that there are only 500 diagnosed cases in the world. His parents cannot afford the cure, and they have gone as far as writing to PM Modi for help.
“There is never any pain or any other kind of irritation, he just bleeds every 10 days. You know what happens when we lose that much blood.” - Bharath (Father)
Likhit is brave, but it is not enough to save him from this struggle
Likhit suffers from a very rare genetic disorder, LAD Type III & Glanzman Thrombasthenia which causes him to bleed profusely until he gets blood transfusions. Every 15 days, they run to the hospital with Likhit holding his hands over his mouth, trying to stop the blood from oozing out. He does not like the taste of it. He is not able to spit it out. He is scared that his teeth may all fall out.
"Likhit knows that it is hospital time when he bleeds, and he knows the entire drill, but he never cries, neither is he cranky. He goes around smiling and making friends in the ward, talking to everyone. Due to his thin veins, nurses insert the injection in his neck, a painful procedure, but he is very brave."
Over the last 2 years of treatment, Bharath has already spent 8 lakhs in treatment, and he needs 40 lakhs more
The only permanent cure for Likhit is a Bone Marrow Transplant(BMT). The bleeding has increased, and so have the visits to the hospital. While the financial strain can be managed, Likhit's tiny body cannot handle the iron buildup from transfusions. It is likely that his organs will get damaged from frequent transfusions. This could be fatal.
“I am paying more than 30k a month because the frequency of the bleeding has gone up. Only last week, he got the platelets transfusion, and now again within a week we had to admit him for another platelet transfusion. Can you imagine what this does to a child, struggling with this disease for years?"
Bharath who works with payroll management company earns Rs. 27000 a month, exhausting more than that for Likhit's treatment. He is the only earning member of his family, looking after his son, wife and aged father. He sometimes works on Loss of Pay, as he has exhausted all his leaves trying to reach out to friends, acquaintances, government officials, support groups to ask for help for Likhit, but those contributions have not been sufficient. Likhit's bone marrow transplant itself would cost him 40 lakhs. Bharath knows that he will not able to arrange for such a large amount on his own. Sometimes, he loses hope that he would ever be able to save his son.

"It is Likhit's smiling face, that keeps me and my wife keep up the struggle," says Bharath.
He will grow up to be a linguist if he survives this disease
Likhit is a talented kid, and he already knows to speak in 4 languages, including, English, Telegu, Kannada, Tamil, and now wants to learn Malayalam from Youtube. He also loves to have ice-cream, since it is soft and melts right away in his mouth. Biting anything hard makes his gums bleed. If his condition deteriorates further, it would be very hard to save him.

Your contribution can help Bharat save his son.
Doctors letter updated 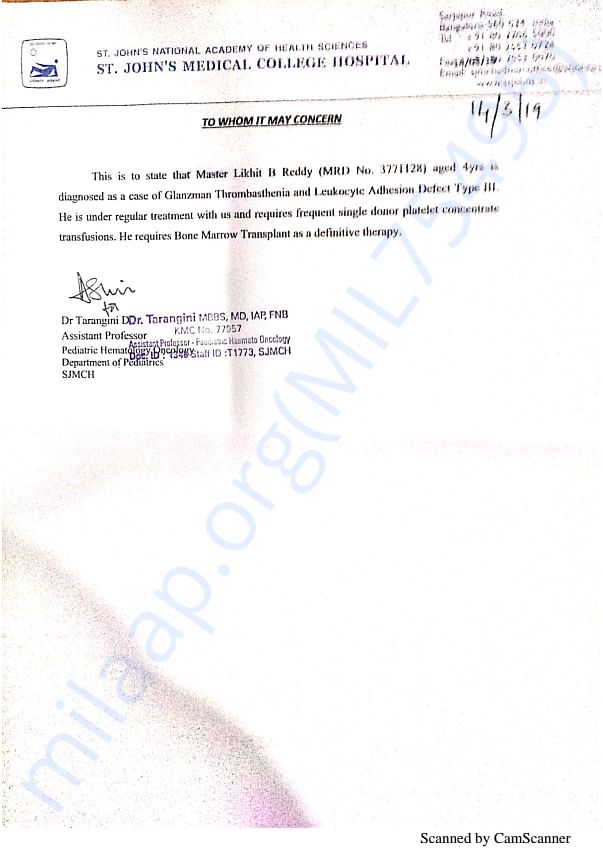 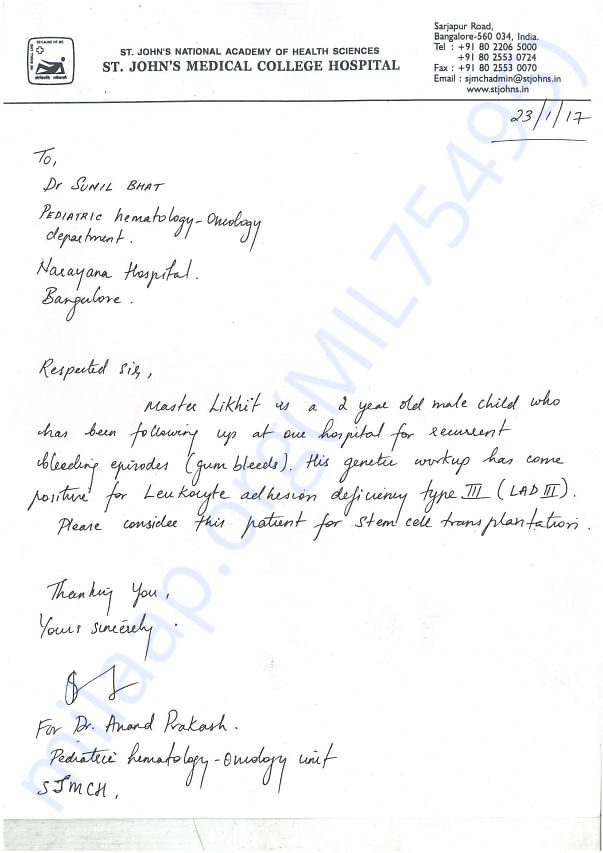 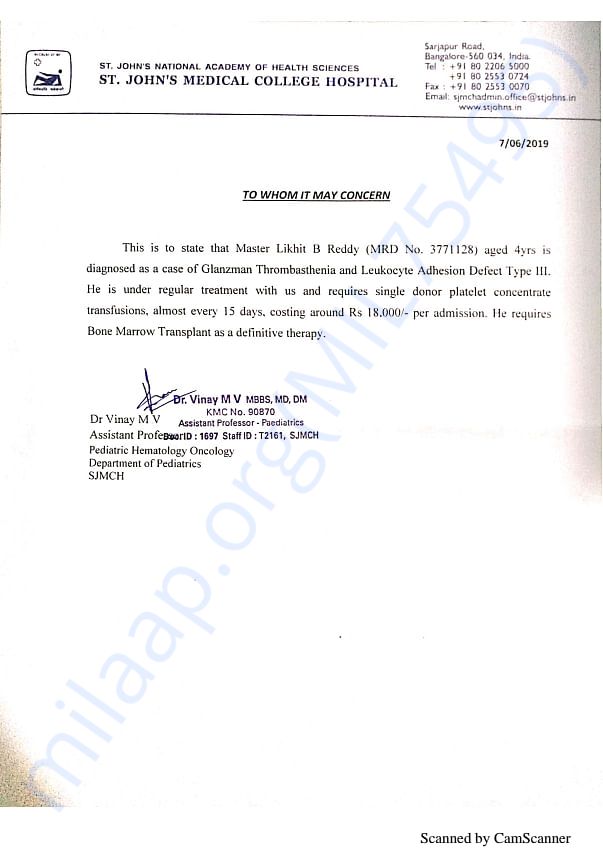 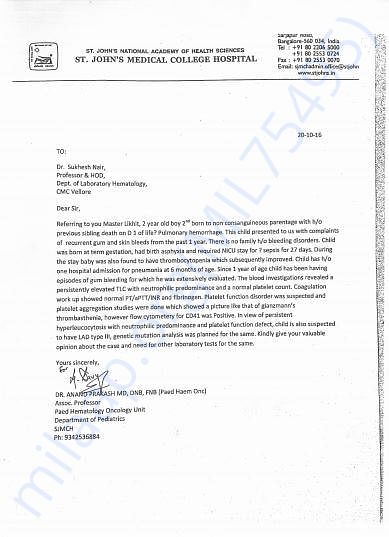 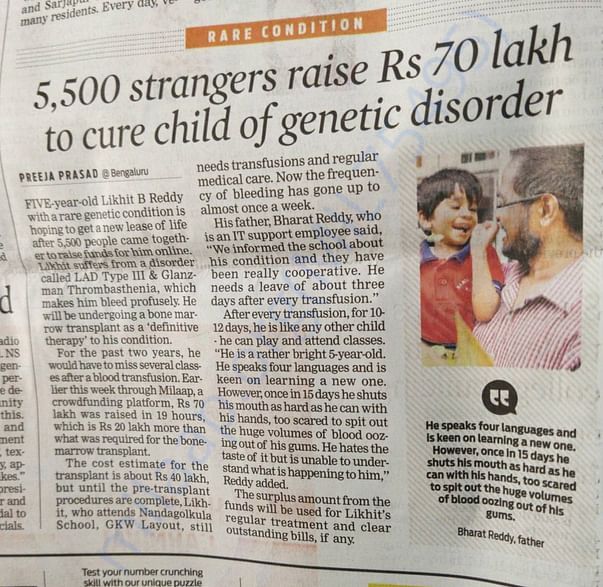 Thank you so much for all for blessing my son Likhit. After 5th Nov 2019, Likhit got admitted twice for SDP and once for spd & blood.

As on 31st Dec, we celebrated New year in hospital. Please pray for my son's well being. I shall keep you all posted on the progress.

Thank you so much for all the support that you have shown for my son Likhit.

On 5th Nov 2019 Likhit got discharged who got admitted on 29th October. I shall keep you posted.

Thank you so much for all the support that you have shown for my son Likhit. I am humbled and cannot put my words out .

On  29th October, he got admitted again, this being his 4th admission in October as he had gums bleeding. We're having to admit him every week. We shall keep you posted. Thank you again.

Report fundraiser
See how thousands are crowdfunding for their causes on Milaap
Rs.7,719,714 raised

Donated to this campaign via Paytm? Click here if you can’t find your donation listed below.
A
Anonymous donated Rs.1
AR
Aaryan donated Rs.475

Likhith, you are so cute n brave. May god bless you with good health.

Donated to this campaign via Paytm? Click here if you can’t find your donation listed below.
A
Anonymous donated Rs.1
AR
Aaryan donated Rs.475

Likhith, you are so cute n brave. May god bless you with good health.

BM
You are sending a message to
Bharath Mohan
Go back 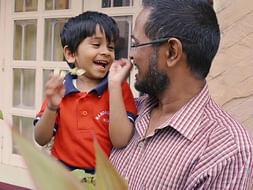