This Father Of Two Is Suffering Severe Chest Pain | Milaap
This campaign has stopped and can no longer accept donations.

This Father Of Two Is Suffering Severe Chest Pain 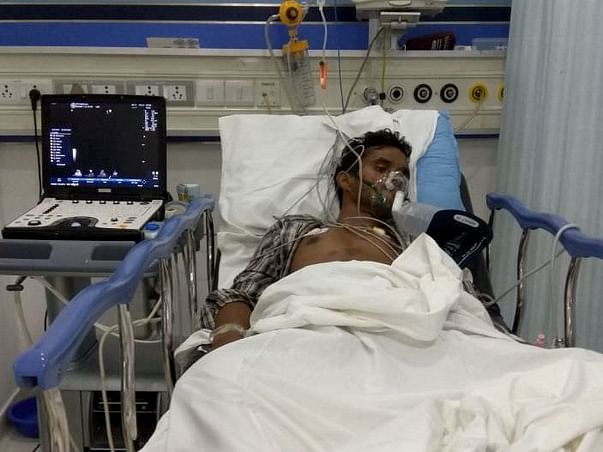 "He was complaining of pain for 3 months. Every time we went to a doctor, the reports turned out to be normal and we were sent home. We almost lost him!"
30-year-old Khitish traveled from his small town in West Bengal to Bangalore this week to find a solution for the searing pain in his chest. He could not breathe and needed urgent surgery to survive a condition that had gone undiagnosed for months. Khitish is now in the ICU struggling to recover, while his brother, Satish, is making calls to everyone he knows to help with the rising medical expenses.

"He was telling us from past 3 months, that he had chest pain. At first, we thought it was exhaustion because of his work. Then, I began to feel something was wrong. He is just 30. He cannot get chest pain. We went to a local doctor in our town. Every time, he would give pain medicines. If we ran tests, they would come back normal."
Since the reports showed no abnormality, Khitish's doctor sent him home. In 3 months, Khitish's pain kept getting works. Suddenly, one day, he began crying out of pain and begged Satish to take him to the doctor. On the way, Khitish clutched his chest and throat as if he could not catch a breath. Terrified for Khitish's life, Satish drove him straight to a nearby hospital. His children and wife were scared for him. They waited at home to hear positive news.

If he did not get that surgery, he would not be alive

"I admitted him there, and when they pulled up a report, they said his heart was damaged. They said my brother needed surgery immediately otherwise he would die. Khitish has a wife and two little children depending on him. What would happen to them? The hospital said facilities there were not enough for him and we should come to Bangalore."
Satish had once been to Manipal hospital, so he brought Khitish straight to the same place. As soon as Khitish consulted a cardiologist, a full workup was completed and he was rushed into surgery.

"If they had not performed the surgery, Khitish would not be alive. The thing is, he has been through hell during these past few weeks. So he will take time to recover. As a driver, I do not make much. He works for an electrician and even he does not have any savings. We came here with Rs. 2 Lakhs, borrowed from everyone we know. That has not been enough for the treatment. I don't want to discontinue the only thing that is keeping him alive."
Khitish's bills have crossed Rs. 6 Lakhs now. Satish has no more resources to explore. He needs financial assistance and the hospital has started this fundraiser to help with the medical expenses.
With your support, Khitish can recover and go back home to his wife and children.
Estimation letter 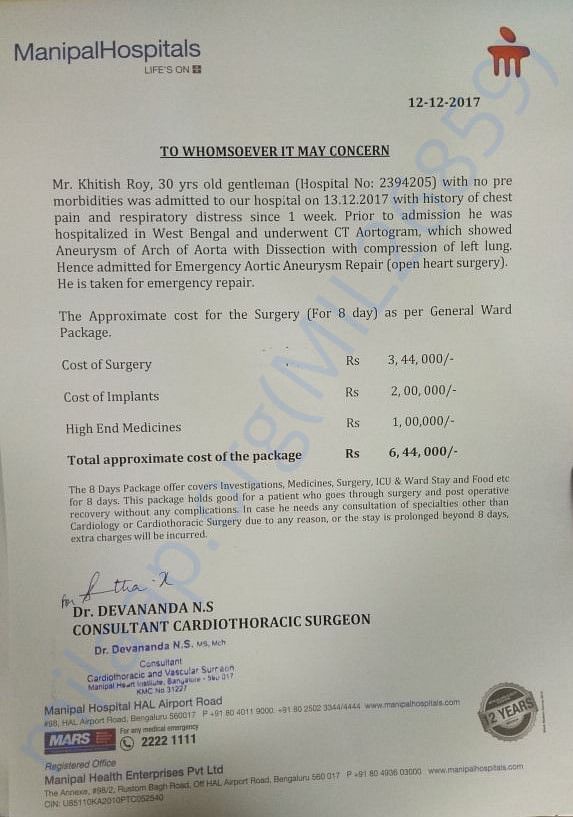 Khitish passed away today.  Our hearts go out to this brave man who endured so much pain and fought so hard for his life but due to the severity of his condition he was unable to make it. Your timely support ensured that he received the best medical care. Funds from the campaign will be utilized for bills incurred by the family for Khitish's treatment.

The family is grateful for all the care and support you’ve shown Khitish. The past few days have been the most difficult ones for the family and we hope they find strength in this time of grief. May Khitish's soul find peace. Please keep the family in your prayers.
Donate
Report fundraiser
See how thousands are crowdfunding for their causes on Milaap
Rs.80,865 raised

Donated to this campaign via Paytm? Click here if you can’t find your donation listed below.
KL
Karthik donated Rs.1,000

You are not very old, you have a long way to go! Keep that positivity in you and I'll pray for your speedy recovery too. God bless!!

Donated to this campaign via Paytm? Click here if you can’t find your donation listed below.
KL
Karthik donated Rs.1,000

You are not very old, you have a long way to go! Keep that positivity in you and I'll pray for your speedy recovery too. God bless!! 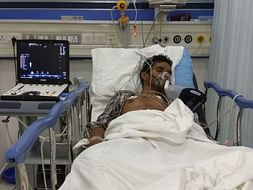 This Father Of Two Is Suffering Severe Chest Pain