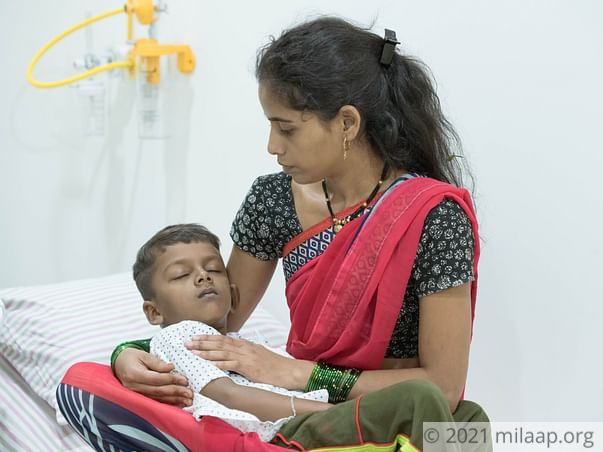 “My son was born 6 years ago and since then he’s been to the hospital almost twice every month, for a total of 50 times already. In fact, his life has been nothing but being admitted in the hospital and being at home. Now, his condition is so critical and his immunity is so low that any infection can take his life. “ – Mohan, Kedar’s father

6-year-old Kedar’s life has been tormented since birth because he’s suffering from a rare immune disease that makes him highly prone to each and every infection out there. Suffering from raging fevers almost every week, now, Kedar is so critical that only a bone marrow transplant can save him. His father Mohan, a very poor farmer, cries every night because he has nothing to save his son.


Mohan, Kedar and Aruna (mother) at the hospital

“Since birth, his poor immune system has made him so weak. Due to this, just 2 weeks after birth, he started getting fevers almost every week. His fever rises above 103 -104 degrees and his body is burning hot. We’ve admitted him so many times, and most of the times we’ve stayed in the hospital for several nights because he was critical and we didn’t even have money to get him discharged early too. I would always have to borrow, that’s how poor I am. In December (2017) he was so critical that he was admitted for 25 days” – Mohan

In December, Kedar was diagnosed with chronic granulomatous disease which is an extremely rare immune disease. Only 1 in 10 lakh people are affected by this. Now, Kedar’s immune system is so weak that even a cold or a small infection could be life-threatening. To make things worse, if Kedar is left untreated, his raging fevers will also cause severe brain damages. The 6-year-old has spent his entire life in nothing but pain.

Kedar is severely underweight and can’t go anywhere outside, let alone school, because of his disease

“Right now, apart from fevers Kedar also has frequent stomach aches. Recently, his mouth has started hurting too. He wants to go out and play but we don’t let him go because he can get infected so easily. He just sits at home. If we take him outside, it’s because he needs to go to the hospital. For that too, he wears a mask so that he won’t get infected while traveling. He’s very frustrated because he gets tired very quickly and can’t play too. He keeps asking, ‘Papa, when will I go to school?’. I feel so bad and it gets worse with every time he asks.” – Mohan

Kedar weighs just 14 kilos whereas an average 6-year-old weighs around 20 kilos. His body is so weak and in addition to this, he doesn’t even feel like eating because he’s down with fever so frequently. His only hope of survival lies in undergoing an urgent bone marrow transplant but his poor father, who is also matched to be the donor, feels helpless because he can’t afford it.

Mohan is poor and not in the pink of his health, but he is desperate to save Kedar and is running out of time

These parents were told in December (2017) that Kedar needed an urgent bone marrow transplant and since then nothing has happened because they just can’t afford such an expensive surgery.

I work as a farmer and we earn just around Rs. 100/day. We live far away from the hospital and just travelling back and forth costs us around Rs. 1000. How can a poor man such as myself, who is buried in so much debt, afford this surgery? My wife, Aruna, and I cry every night and we’re not in good shape too. I’m 32 years old but I weigh just 50 kilos, that’s how bad it is. I just want to save him and see him go to school.” – Mohan

To help his son live, Mohan has borrowed over Rs. 2 lakhs from his friends and relatives and exhausted all of his family’s hard-earned savings which amounted to Rs. 1.5 lakhs. 6-year-old Kedar’s condition is worsening every day and it’s possible that the next infection could take his life. Mohan is running out of time to provide Rs. 38 lakhs for the life-saving bone marrow transplant and he cannot afford this without your help.