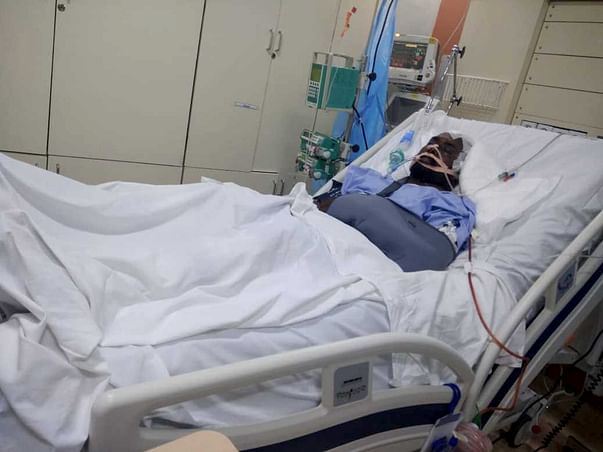 "In just the blink of an eye, my husband lost 40 years of his memories about our marriage, children and our life. Suddenly, I became a stranger to him. My son calls out to him saying 'appa, appa' and cries because he doesn't look at him. I show him our marriage photos and try telling him stories in the hope that something might trigger his memory, but he looks at me blankly from his hospital bed, with no flicker of recognition." - Angel, wife of Kathava Rajan

A terrible accident had damaged his brain and despite two surgeries, he's still not out of danger

Kathava Rajan worked as an electrician. On September 1st, on his way to home from his work, he met with a terrible bike accident. Kathava Rajan was the pillion rider. While waiting at the signal, a car rammed into his vehicle and catapulted him through the air, with his helmet flying off. He fell on the ground smashing his face and bones. He was then rushed to a nearby hospital in an ambulance by some people who had witnessed the accident.

"I will never forget that phone call I got from his friend saying that my husband had met with a small accident. But something told me it was more serious than that. I rushed to hospital with my two little children, praying all the way. When we reached, I saw him lying on the bed, almost lifeless. - Angel.

Kathava Rajan had a surgery on the same day to remove the blood clot in his brain. He was in the ICU, unconscious for more than 10 days. Few days later, he had another surgery to remove the fluid accumulation in his brain. Now, he has gained his consciousness, he opens his eyes but he hardly recognizes anyone. Brain damage has led to the loss of memory. He needs to continue treatment to recover completely, but Angel is struggling.

His poor wife desperately tries to bring back his memory, but nothing works

Angel's world revolved around her husband and children. Now, the life she knew and loved has come to a standstill. She spends the whole day in the hospital, taking care of her husband along with her 2 children Kayalvizhi (4) and Somnath (1), desperately trying to help him remember them.

"I do not know how much he understands of what I say to him. Doctors said he could only absorb so much at a time. My daughter keeps asking me when he will talk to her. I do not know what to say. Each passing minute feels like a year to me. I'm just trying to get through everyday and gathering strength to endure all this for my children." - Angel.

Angel somehow managed to get by with the support of her brother who is also a daily wage worker. Kathava Rajan is the sole breadwinner of the family, and could barely save anything from his meagre income. With the help of her brother and by borrowing from relatives, Angel has spent nearly 15 lakhs on Kathava's treatment. He was shifted to the general ward 2 weeks back and the doctors have said that he has a high chance of recovery provided he continues the treatment which would cost another 5 lakhs.

"All my relatives are daily wage workers and my family has already given up on him. Only my brother is helping me. I'll forever remain grateful for his help. But now I don't know what I can do to save my husband. I need him, my children needs their father. He has been our pillar of strength for so many years, I can't bear to see him like this." - Angel.

40-year-old Kathava Rajan, husband of Angel and father of two little children is battling for his life. A near-fatal accident has robbed him of his memory and his ability to move. He is slowly recovering and needs to continue treatment for few more weeks. His wife is desperately waiting for any help to save her husband. She is neck deep in debts and with absolutely no income, only your help can save her husband. 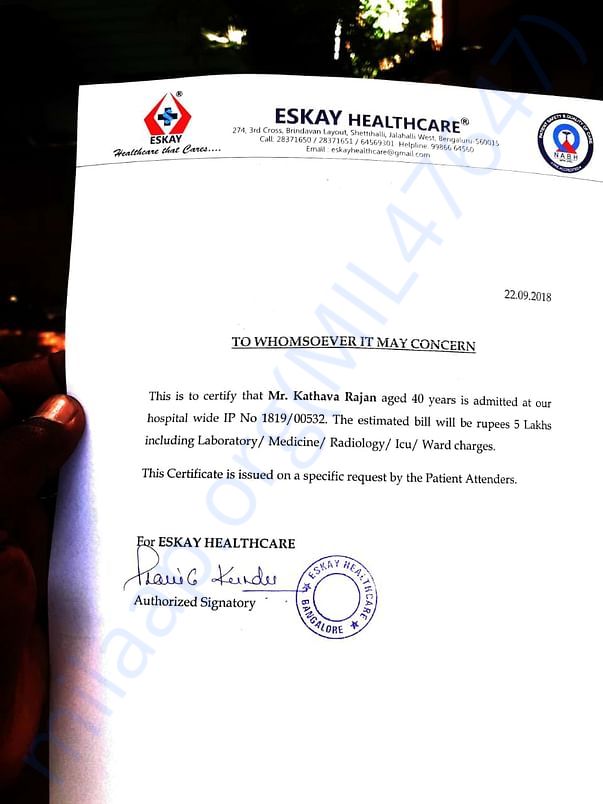 Ask for an update
DEAR SUPPORTERS!

KATHAVARAJAN WAS YESTERDAY ADMITTED IN ESAKY  HOSPITAL FOR URINE INFECTION AND FEVER.

I HAVE ENCLOSED THE PHOTOGRAPH.

I want to thank you all for your generous support.

Kathava Rajan was admitted at Columbia Asia, he was on ICU for 16 days and was not responding for the treatment. We discharged him from there as we could not offer so much money to pay the bill and somehow we managed. After that we admitted him at SK heath care, Bengaluru and he underwent an operation for brain. After which, he is able to respond little by eating food and talking little. Currently physiotherapy is done at home itself. Hopefully he will be recovered soon.

Thank you all for the donations you have made and please continue to share the campaign as we are in need of more funds.

Thank you all for your support. Greetings of the day!

Kathavarajan as been discharged from S.K hospital after his operation. He still in a partially vegetative state. We are trying all sources available to raise funds for his treatment. Please do share this campaign further with your friends and family so we can raise funds faster towards his treatment. Will keep you posted about his health.

Scan & donate with any app
check_circle_outline Download payment receipt
Report fundraiser
Know someone in need of funds for a medical emergency? Refer to us
Rs.545,848 raised

S
You are sending a message to
Shiva
Go back 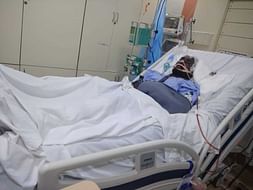