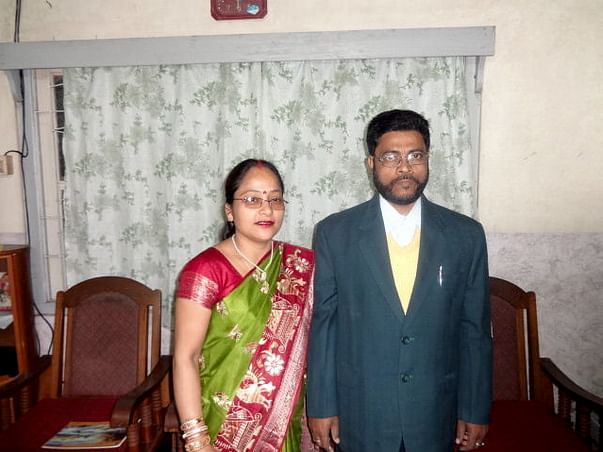 "Cirrhosis, as people think, is not a disease which is caused only by alcohol. There are other factors too, which can cause liver cirrhosis like fatty liver or hepatitis B/C. Joydev is a non-alcoholic and non-smoker who suffers cirrhosis. He really needs a chance in survival." - Dr. Anand Khakhar.
54-year-old Joydev Mandal is diagnosed with Liver Cirrhosis. Cirrhosis is a slowly progressing disease in which healthy liver tissue is replaced with scar tissue, eventually preventing the liver from functioning properly. The scar tissue blocks the flow of blood through the liver and slows the processing of nutrients, hormones, drugs, and naturally produced toxins. He needs to undergo an urgent life-saving Liver transplantation.
Joydev and his wife Kakuli are teachers and hail from Rangapura, Assam. Their sons Zenith and Benith aged 17 and 13 are studying in Assam. He earns upto 25,000 per month and his wife 3000 as she is not a permanent staff. Joydev went for his first check up four years back at Guwahati. He then went to Narayani Hospital, Calcutta. In the year 2014 he had a lot of difficulty and pain and was admitted in Asian Institute of Gastrenterology, Hyderabad. After discharge he was under medications. After a few months he was admitted in a hospital in Delhi. He was again taken back to Assam and was in treatment. He was later brought to Chennai for his treatment. They’ve spent lakhs completely selling their assets. The family needs help to go ahead with transplant.
Doctors have examined Joydev and advised Liver transplantation. This is to be done in Apollo Hospitals, Greams road, Chennai. The surgery costs almost 28 lakhs. The family can afford only 15 lakhs and needs help with the rest. The family is not able to go further with the Liver transplant unless they get the required help. Transplant has to be done at the earliest 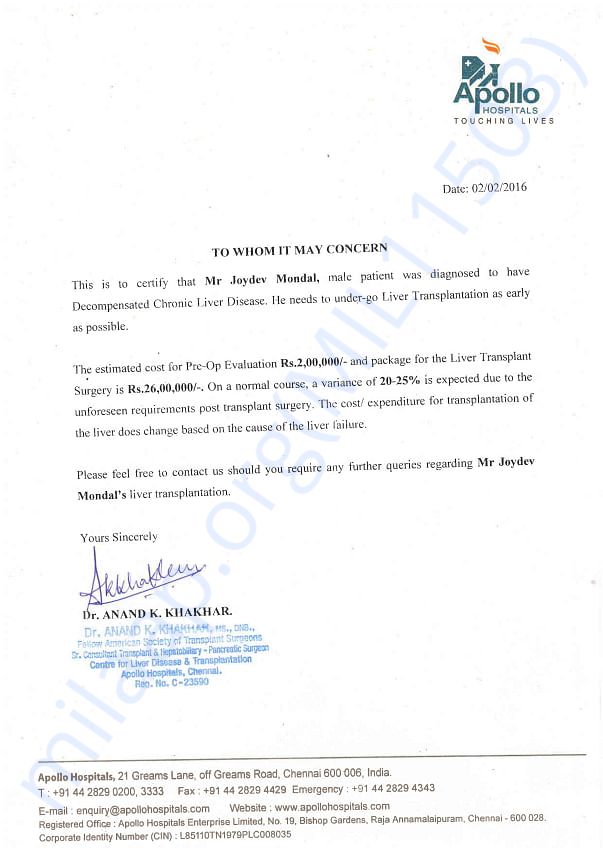 UPI: rzpy.givetomlpjoydevmo001@hdfcbank (Copy to clipboard)
Donate
Report fundraiser
See how thousands are crowdfunding for their causes on Milaap
Rs.32,149 raised

Donated to this campaign via Paytm? Click here if you can’t find your donation listed below.
A
Anonymous donated RM500
DB
DEEPAK donated RM500

God blessings for your good health and divine healing. Have faith on God and forgive all.

Donated to this campaign via Paytm? Click here if you can’t find your donation listed below.
A
Anonymous donated RM500
DB
DEEPAK donated RM500

God blessings for your good health and divine healing. Have faith on God and forgive all. 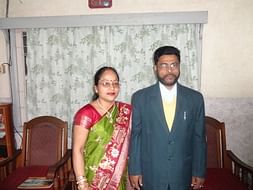