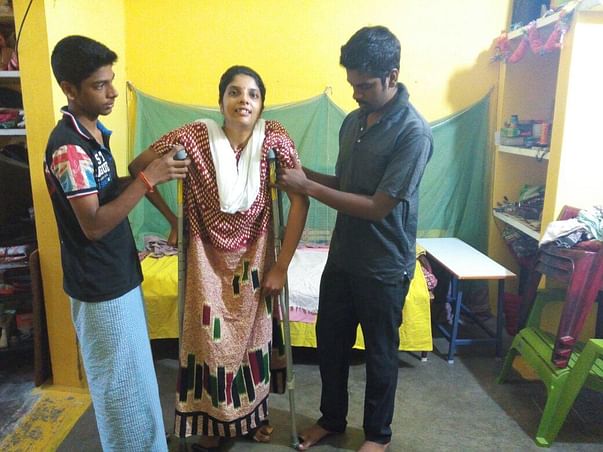 Hrudalaylakshmi’s father Karthi is a children’s story writer. He also makes short films with family- oriented messages. His wife Rajeshwari is a housewife. The couple has two other sons, who are in college now.

A happy family until their world collapsed:

Hrudayalakshmi was a smart college going student. At the end of her fifth semester, she came down with fever often. At the time, dengue was spreading in Tiruppur and doctors assumed that it was the same. Finally, her father took her to Ramakrishna hospital in Coimbatore where doctors diagnosed her with Brain TB.
It took one week before Hrudayalakshmi’s organs failed and she went into a coma. Doctors told her parents to start preparing themselves for the worst.

Her father brought her back from the brink of death:

Hrudayalakshmi was unresponsive in the ICU. Doctors told her father that she would not recover. Karthi rushed into the ICU and held his daughter’s hand.
“I cried and told her- Doctors are saying that you will not improve, but I know you. You have so much more to do in life. Just squeeze my hand if you can hear me.”
Hrudayalakshmi squeezed her father’s hand. Karthi then recorded a 6 minute audio of him speaking, urging his daughter to wake up. Doctors played this in her ear for 6 days continuously. One night, the nurses called Karthi, saying his daughter had opened her eyes.

(As she cannot drink water with a glass, her mother feeds her water with a spoon)
Hrudayalaksmi had opened her eyes, but there was a long way to go. At the end of 2016, doctors at Ramakrishna hospital told her parents that she had recovered from brain TB, but she had to regain movement in her limbs. And this is where her parents began the Ayurveda.
Now Hrudayalakshmi takes intensive massage therapies from Sri Sai Clinic near Tirupur. Her parents hope that she recovers movement.

How Can You help?

Hrudayalakshmi had the willpower to beat death. She is on her way to recovering, and needs your support to do so. Karthi cannot afford the cost for her therapy- he has spent over Rs 9 lakhs on her hospital treatment. He does not have a steady job as he spends his days at home taking care of his daughter.
Hrudayalakshmi still spends her time studying, as she wants to recover and become an astro- physicist. In the above picture- which is for her standing therapy, she still tries to keep up with her studies. This 22-year-old knows that she has her life ahead of her, and wants to keep fighting.
Your treatment can mean that this bright positive youngster can live her life and chase her dreams!