This 7-month-old baby is unable to Breathe | Milaap
This campaign has stopped and can no longer accept donations.

This 7-month-old baby is unable to Breathe 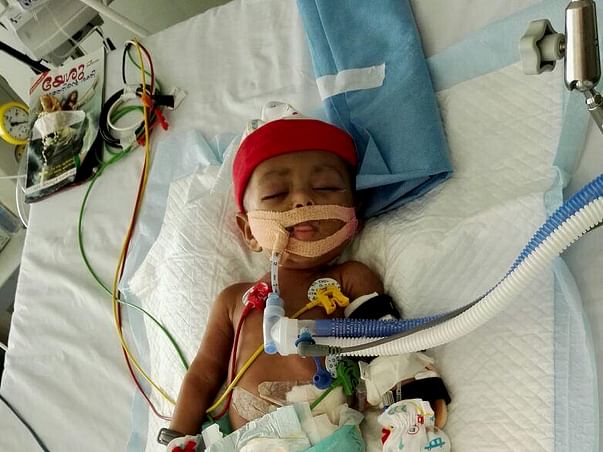 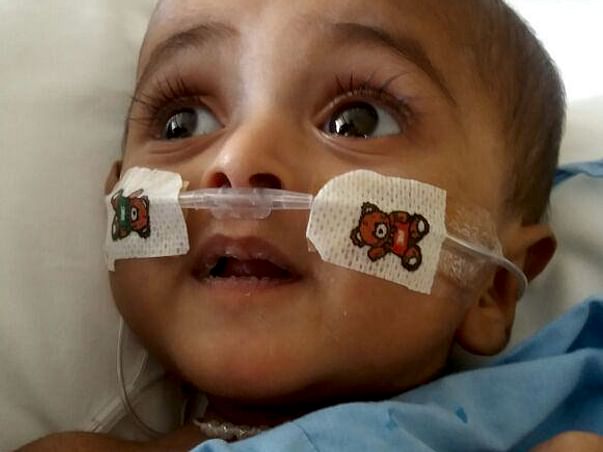 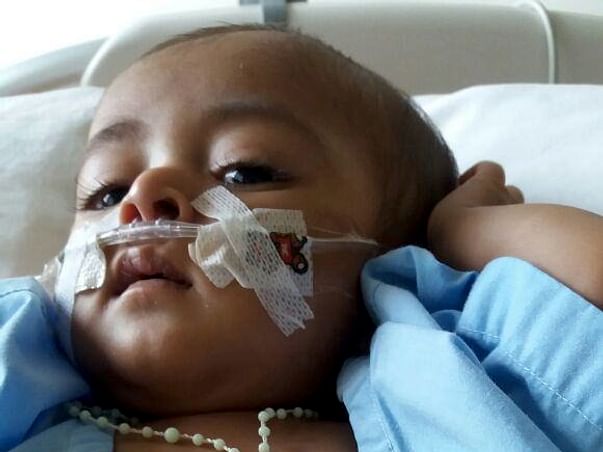 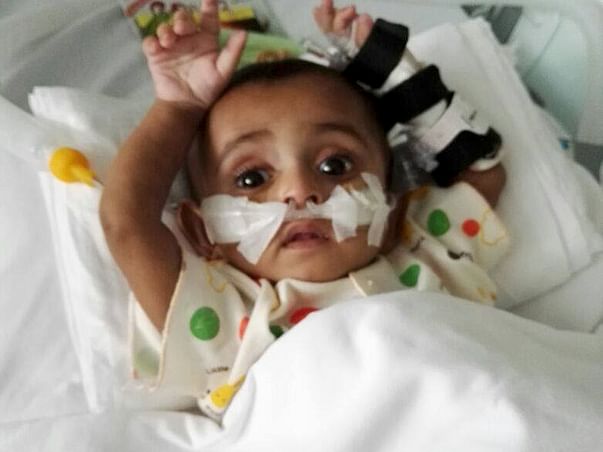 Previous Next
Baby Aiden is a 7month old. All around him, babies are privileged to breathe free, crawl around, munch on food and toys and to grow and explore their world. This is not the case for our baby Aiden.
His lungs are weak, he needs oxygen to breathe, he is confined to the bed and he cannot accept food by mouth.
His growth and development has been interrupted and severely slowed down with his ailments.
With tubes in his nostrils to aid him breathe, and with tube through his abdomen into his stomach for feeds, this darling boy still manages to give you a heart melting smile.
Just like any other baby born into this world, baby Aiden and his twin brother were the long awaited first rays of sunshine into their parents' lives. They were extremely precious.
The twist in his tale began when he was just 3months old. He started to cough up and choke on his feeds and got terribly sick. Taking immense efforts to breathe and at the verge of collapse, he had to be placed on ventilator support.
Each time he got off the ventilator, everybody thought he was getting better and he would be eagerely started on feeds. But each time the poor baby choked on his feeds getting the milk straight into his lungs, clogging the organ from functioning. Four times baby Aiden has undergone the ritual of ventilation where a tube is painstakingly placed down your throat to reach the lungs. All within a span of 2months. All by a baby who can barely understand what is going on.
In the repeated fight against these problems, his lungs lost its stamina to recover and became so fragile and delicate to perform even normally, vulnerable to the slightest infections. Baby Aiden now realises his each breath as he takes it with thrice the effort that we take.
The doctors figured out that his food pipe has a problem where feeds were pooled up, rather than pushing them rhythmically forward into the stomach. The normal chain of events after swallowing were disturbed. The pooled milk then jumps back into his throat and gets misdirected into his lungs making him choke. To make things worse, milk that has already reached the stomach also managed to propel back into this food pipe that is weak. To overcome this problem, this tiny baby went through a major surgery where the junction between the food pipe and stomach were tightened to prevent feeds jumping back. And a hole was placed in his stomach to place a tube through his abdomen, as an alternative route for feeding.
So Aiden cannot be fed by mouth in fear of choking and instead he is fed through a tube into his stomach. On one side his Mum spends her lifetime loading his feeds into his tube every hour shutting her heart from the tears and pleas of his twin brother. On the other side, baby Aiden is coughing away with his weakened lungs, crying and vigorously sucking away at his fingers wondering why he is denied food by mouth.
As a result of continuous hospitalisation and incomplete recovery, 5month old baby Aiden did not learn to hold his neck up or sit or even hold toys. But midst all this pain, his smile is what keeps his parents going. His parents have exhausted all their financial resources ever since the Pediatric ICU has became Aiden's home from September 2016.
His line of problems did not seem to stop there either. When feeds were byepassed through the tube, doctors found out that even normal saliva in the mouth seems to pool, cause choking and clog his lungs. His lungs succumbed to this and now he needs permanent oxygen support.
Doctors list his problems as oesophageal dysmotility with gastroesophageal reflux and chronic lung disease. In normal words, he can't breathe free, he can't feed and thanks to all this he can't move around. The life of his parents and his brother have changed dramatically as baby Aiden is still hospitalized.
Our prayers could work miracles, and whatever little help we can do can make a big difference to their lives. Please help.
Why should you contribute?

Funds can be of great help in his prolonged ICU stay, maintaining oxygen support using the costly oxygen concentrator for him at home thereafter and for the rent of the expensive feeding apparatus they need to push feeds through tube directly into the stomach. Baby Aiden needs to grow to outgrow his problems, which is the only hope for this baby who tolerates immense pain and yet smiles at you.
Medical certificate 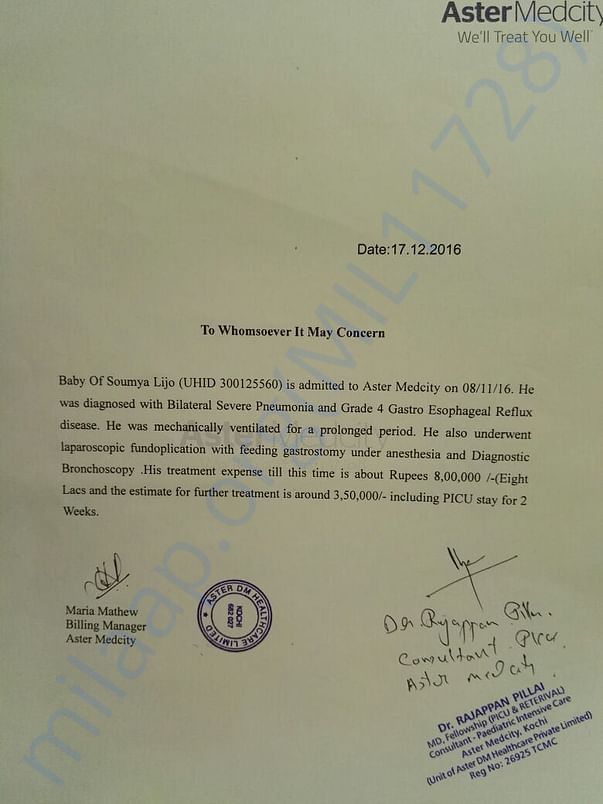 Since 16th March’17, Aiden was at home and was facing breathing difficulty.
But the doctors were hopeful that he would get better.

However, we deeply regret to inform you that despite the best efforts Aiden passed away on 3rd April’17. He had fever for two days, following which he faced a sudden death.

We once again thank all the donors for the wonderful support. May his soul rest in peace. We wish his family all the strength in such a difficult time.
Thanks so much for your support all of you.

Aiden is at home but due to slow gain in weight and breathing difficulty, he needs a higher level of oxygen support. It is being arranged. This means his family needs to rent this equipment which is more expensive than the one they are currently using. Besides rent, these equipments also incur more electricity costs.

Other than this, Aiden still manages to give his adorable evergreen smile and that is what keeps his family going. Do keep him in your prayers.
Dear Supporter,

Thanks a million for your valuable contributions.

Aiden was sent home today with the oxygen concentrator for the oxygen via nasal tubes and the feeding apparatus. Hopefully he has no fever or dehydration or infections. Do pray please. If he could just gain weight wihout any interruptions, hopefully he can outgrow his problems
Load more
Donate
Report fundraiser
See how thousands are crowdfunding for their causes on Milaap
Rs.308,292 raised

Donated to this campaign via Paytm? Click here if you can’t find your donation listed below.
OP
Oneil donated $100

God bless you & get well soon

Donated to this campaign via Paytm? Click here if you can’t find your donation listed below.
OP
Oneil donated $100

God bless you & get well soon

MS
You are sending a message to
Meryl Stanley
Go back 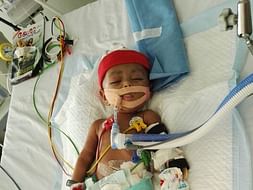 This 7-month-old baby is unable to Breathe