Help Baby Younus undergo a bone marrow transplant. | Milaap
This campaign has stopped and can no longer accept donations.

Shares
Share on Whatsapp
Birth of a child is an occasion of utmost celebration for any couple. But such was not the case with Sahdiya and Mafas. Hours after their baby was born, the doctors noticed a lump of mass on his backside. The family immediately discerned that something was wrong, as even the most naïve of us know that having an unexplained lump is never a good sign.

“The doctors carried out scans. Even though we had an inkling something was off, the diagnosis was far beyond what we could have imagined”, recalled the baby’s mother, Sahdiya.
A pain that didn’t subside
Hailing from Sri Lanka, 4-year-old baby Younus was diagnosed with Yolk Sac Tumour right after he was born. It a rare, malignant tumor of cells that line the yolk sac of the embryo and affects the testes or ovaries.

“After the diagnosis, he was kept in the hospital for 15 days. The doctors then decided to operate. My baby seemed fine after that but 6 months later, we were back at the hospital. They said that the first operation wasn’t successful and Younus needs to undergo surgery again. I haven’t been as helpless as I was at that moment. My baby was going to be in so much pain and I could do nothing about it. The thought broke me. Yet, I hoped that this was the last time when my baby suffered”, said Sahdiya.
He grew with his illness
Luck was having none of Sahdiya’s prayer, however. Two years later, Younus began to develop lump around his stomach region. Scans and test followed and tumour was confirmed. 3-year-old baby was again made to undergo surgery. In addition, the doctors also scheduled him for multiple cycles of radiotherapy.

“Despite everything, his tumour kept coming. That is when one of my relatives who live in India advised me to come here for further treatment. I would give my life to save my child, so coming to India was just a small sacrifice”, said the baby’s father, Mafas.

'We travelled from Sri Lanka to India for our baby'
Back in Sri Lanka where he lives with his wife and son, Mafas owns a shop. His monthly income was Rs. 10,000, until he travelled to India three months back.

“At present, we have absolutely no source of income. In past three months, we have spent close to 8 lakhs on my baby’s treatment. The medical dues keep mounting up. We have no resource here. We even have so much loans to pay off now. I don’t know how will we move forward”, said Mafas.
4-year-old Younus is currently undergoing his chemotherapy at NH Hospital in Bangalore. He has already undergone tumour removal surgery here. To ensure that the relapse doesn’t occur over and over again, the doctors have recommended bone marrow transplant for Younus, followed by radiotherapy. The estimated cost of entire treatment is 15 lakhs.

“My baby is only 4-year-old and he has already undergone surgery 5 times. Imagine being a parent and seeing your child punctured with needles and filled with scars received after surgeries. I and my husband have been wheeling our son to this fate for past 4 years now. Can you imagine how painful life has been for us so far? My child is very active. On best days, we don’t even feel life he ever had any illness. But at the end of the day, we know the truth. No matter how hard we try to pretend we are happy for our child’s sake, we can’t help but cry over his future”, said Sahdiya.

The family has been struggling right since the baby was born. They have already exhausted whatever little resource they had for their son’s treatment. Now they are worried about how will they be able to arrange for such a big amount? That too in a time when they are away from home.
How can you help?
"He misses his home. His friends. He wants to go back to school as soon as possible. How do I possibly explain him how sick he is? In an age when he should be worried about homework and playing with his friends, he is out here on a hospital bed, waiting for someone to save his life and end the misery. "
Younus parents have been praying every day hoping a miracle would save his son. He is unable to afford this cost. With the family in Bangalore from past three months, they do not have the means to earn whatever little they had. They need all the help they can get to save this little boy.
Your contribution would help 4-year-old Younus get the life-saving bone marrow transplant. 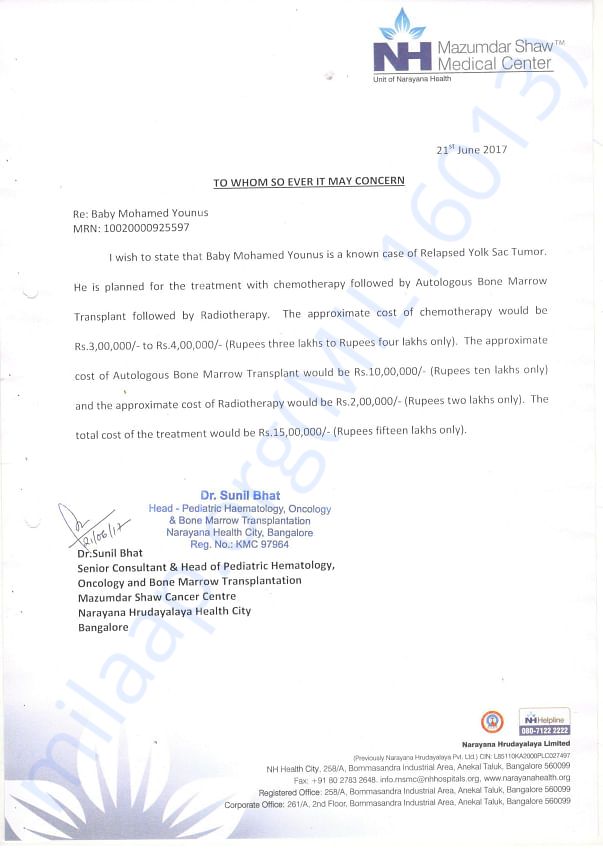 We are very sorry to inform you that Younus passed away on 16th July 2017. We pray the family finds strength in this time of grief.

Thank you for all your contributions to help Younus get the best support.
Donate
OR

Scan & donate with any app
check_circle_outline Download payment receipt
Report fundraiser
Know someone in need of funds for a medical emergency? Refer to us
Rs.87,050 raised

25 Supporters expand_more
This campaign has stopped and can no longer accept donations.
$150 Million +
Raised on Milaap
Are you in need of financial support for medical or personal emergencies, or a social cause?
Start a fundraiser
Or
Know someone in need of funds for a medical emergency? Refer to us
Campaign organizer contact_mail
DB
Dr.Sunil Bhat
Beneficiary: Mohammed Younus info_outline

Donated to this campaign via Bank transfer/QR Code? Click here if you can’t find your donation listed below.
A
Ajmal donated $200
K
Khairunnisa donated Rs.5,000

May Almighty Allah give the child good health.

A
Anonymous donated $200
View all supporters

Donated to this campaign via Bank transfer/QR Code? Click here if you can’t find your donation listed below.
A
Ajmal donated $200
K
Khairunnisa donated Rs.5,000

May Almighty Allah give the child good health.