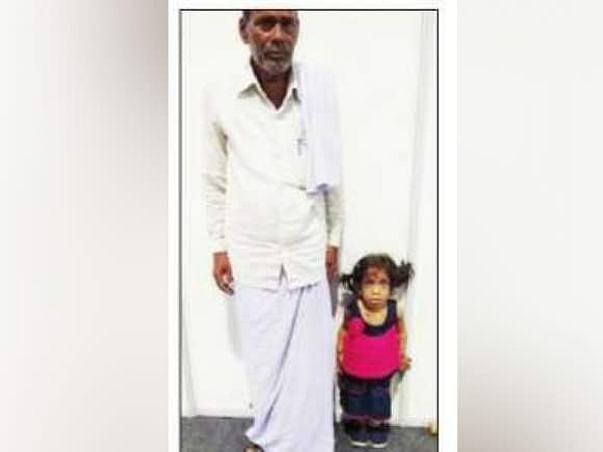 She is seven years old, but has the growth of a three-year-old. With a hunchback and stunted growth, Tanmayi N Gowda knows she's not like other girls of her age because of a genetic disorder. Her grandfather Subrayappa has been seeking from the government for her treatment.
Tanmayi suffers from Morquio IV A, an inherited genetic disorder caused by the deficiency of a specific enzyme.This is a disease of metabolism in which the body does not have enough of a substance needed to break down long chains of sugar molecules.
A class III student of a school in Madhugiri, Tanmayi has been literally crippled by the disorder. “She gets tired even if she walks a bit. However, she is a brilliant student.She has secured good marks in exams and has a sharp memory ,“ said Subrayappa, an agriculturist.
It all started after bouts of fever gripped Tanmayyi when she was seven months old.
“She was healthy but started getting fever frequently. It was only when she was nine months that we noticed there's a problem. She weighs 13 kg now and has not put on weight for couple of years. Her growth has been hampered,“ he said.
Tanmayi's agriculturist parents took her to several hospitals in Delhi but there was no positive results. “I wonder what is so mysterious about my grandchild that we get no solution for her problem anywhere,“ Subrayappa lamented.
After consulting multiple doctors, Subrayappa has come across a doctor in Bangalore who is ready to do the surgery. The date has been decided to be in the first week of November.
Subrayappa cannot afford the cost for his daughter to undergo this surgery. Your contribution can help a little girl lead a normal life!