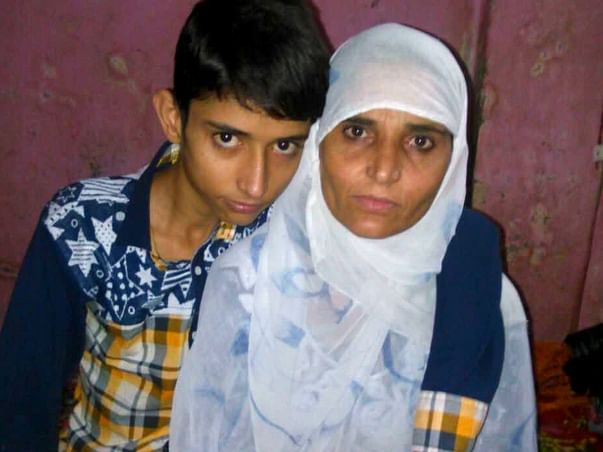 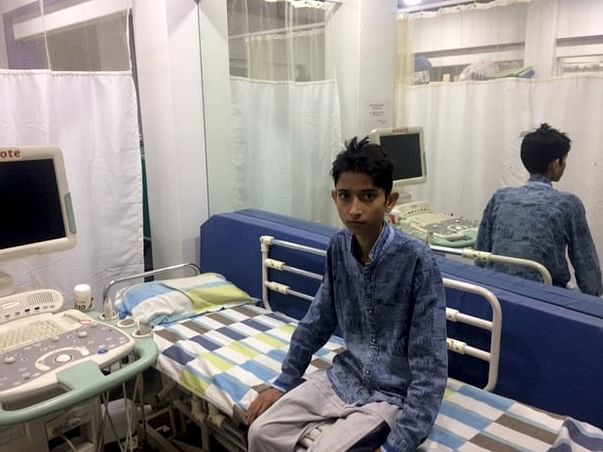 "Most days, I am just roaming around on streets, going from one place to another all day long, hoping that someone will take pity on my helplessness and help me in saving in my young child's life. So far, nothing has happened and with each passing day, the threat to my son's life looms larger," says Johar Ali, Tabrez's father.
15-year-old Tabrez has a severe heart condition, and the only thing that will save him is a heart surgery as soon as possible. His parents are struggling to keep their son alive. They cannot afford the treatment and this has put Tabrez's life in danger.An unsuccessful attempt at treatment
It started two years back when Tabrez, who used to live in his village in UP, frequently fell sick with fever and weakness. His mother, Salma, would take him to a local doctor who would prescribe herbal medicines for him. She didn't think much about until it came to a point when Tabrez, who was in class 8 during that time, had to drop out of school.
Tabrez with his younger brother

Things got so bad that he couldn't even walk outside his house without fainting or turning completely blue. Even the simplest activity made him short of breath. Eventually, he stopped eating and started to lose weight. That is when Johar decided to bring him to a government hospital in Mumbai - where he works.

"After days of waiting in hospital queues, we finally managed to get an appointment with the doctor. After a check-up, the doctor told me that he has had a heart condition for years, and needs immediate surgery. He asked me to arrange for money if I wanted my son to stay alive," said Johar Ali.
Johar somehow managed to arrange for the funds. Surgery was performed but it was unsuccessful, leaving Tabrez worse off than he was before. Again followed the never-ending visits to the doctors and begging them to do something for the kid. In the end, Johar came to Dr Hamdulay who gave him some hope to try surgery once again.
Emotionally and financially bereft
Going through the emotional ordeal of having to see their eldest son suffering every day, the family now has the added worry of arranging more money. Tabrez's father is the sole breadwinner of the family and he drives a rented Taxi in Mumbai to earn money for the family.
Tabrez with his mother
"With private cabs on rise, there's hardly any work left for 'kaali-peeli' (black-yellow) taxis in Mumbai. I barely make Rs 5,000 per month and with this amount, I am struggling to make ends meet for my family of six," says Johar.

The family has spent whatever little savings they had during the previous surgery. In fact, they are still paying back the loan they had taken for the last surgery. Trapped in debt, they have no means left to arrange for the remaining funds.
How Can You Help?
The estimated cost of entire treatment is Rs 5 lakhs and Tabrez's family is unable to arrange that amount. He is barely 15 and has his entire life in front of him. Help him live a life that isn't marked with bad health and frequent hospital visits.
Your contribution can give Tabrez the treatment he deserves. 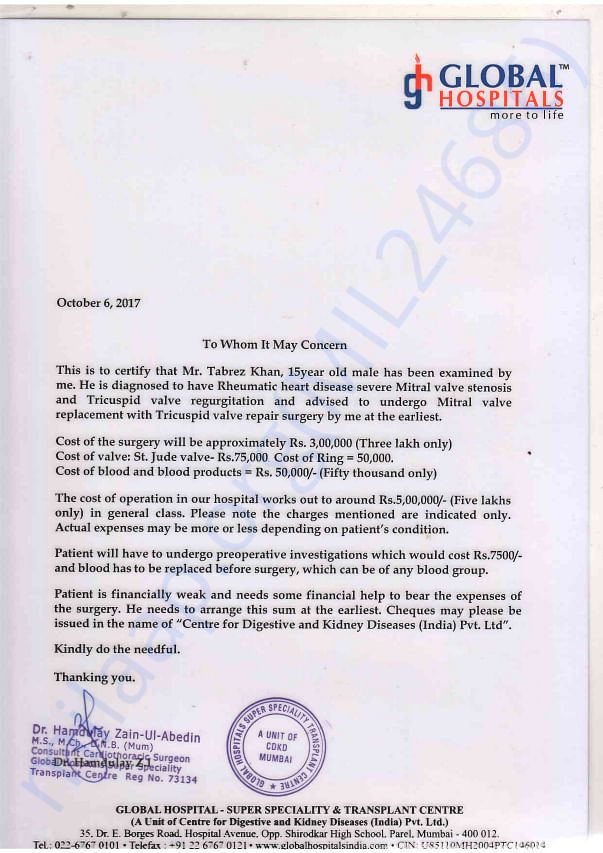 Donate
Report fundraiser
See how thousands are crowdfunding for their causes on Milaap
Rs.38,886 raised

My prayers for you...

My prayers for you... 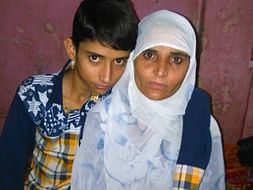