Helpless Mother Struggles Alone In A New City To Save Young Daughter | Milaap
This is a supporting campaign. Contributions made to this campaign will go towards the main campaign.
Milaap will not charge any fee on your donation to this campaign.

“All these years that I have been married, I have never stepped out of my village.The first time that I did was when I had to save my daughter Shreyasi. She is just 3 years old but she is suffering from cancer. I stay with her in the hospital while my husband, a rice-mill worker is in our village, working day and night to arrange money for her treatment. I am alone in a new city and everything is so new to me. But I know I have to find a way to save her life"- Putul, 3-year-old Shreyasi’s mother.

Putul's world revolved only around her husband, Sanjay and her daughter Shreyasi. Her husband works in a rice mill in Katwa town of West Bengal where they live. With what little he made, they led a happy life.

Putul never imagined her little girl would suffer from cancer at such a small age. Shreyashi had little interest to feed as a baby and even when she grew up, Putul had difficulty feeding her. 3-months ago, Putul noticed that her daughter refused to eat anything. Even when Putul made her favourite dishes, she never had it. She thought her little daughter is throwing tantrums but she wasn't. Shreyashi was in pain and couldn't eat. When this continued, Sanjay and Putul took their daughter to the hospital.

The local doctors couldn't identify the cause and suggested to take Shreyashi to Bangalore to a hospital with better facilities. Putul and Sanjay brought her to Bangalore with the hope of saving her. Medical tests revealed that Shreyashi has Wilms tumor, a type of cancer that starts in the kidneys. Doctors started her treatment immediately. They put her on chemotherapy to prevent the cancerous tumour from spreading to the rest of her body.

“Every time the doctors or the nurses enter her room in the hospital, she starts shouting. She is so scared of injections. Every time she has to take the injections, she looks at me with teary eyes wondering why I let her suffer so much.

For the past 3 months, Putul has been spending her days sitting beside Shreyasi’s bed and the night, she sleeps in the hospital corridors. Her husband, Sanjay can’t stay with her in the hospital because he has to go back home and work. If he doesn’t work, Putul will not even have the money for her meals.

During monsoons and winters, Sanjay's work suffers a lot and he earns from very little to nothing. In the productive months, he earns around Rs 5000. In the past few months, they have spent almost a lakh which Sanjay had to borrow. Whatever money Putul had brought from home is over now. She has been skipping meals just to reduce the burden on Sanjay.


Shreyashi needs a few more weeks of chemotherapy followed by a surgery. If she doesn't get a surgery soonest, cancer can spread to the abdomen and lungs.

“We need to arrange Rs 4 lakhs more to continue her treatment. We have already borrowed from private lenders. If we can’t pay them back, we won’t be spared. There’s no money to do anything. I think the last option that we have left is to kill ourselves.”-Putul

3-year-old Shreyasi has a cancerous tumor in her kidneys that has left her in immense pain. Without chemotherapy and a surgery, it will be impossible to save the little girl. The guilt of not being able to save her daughter and the pressure from money lenders have added to the misery of her mother who struggles alone to take care of her. With your help, she can save her only daughter. 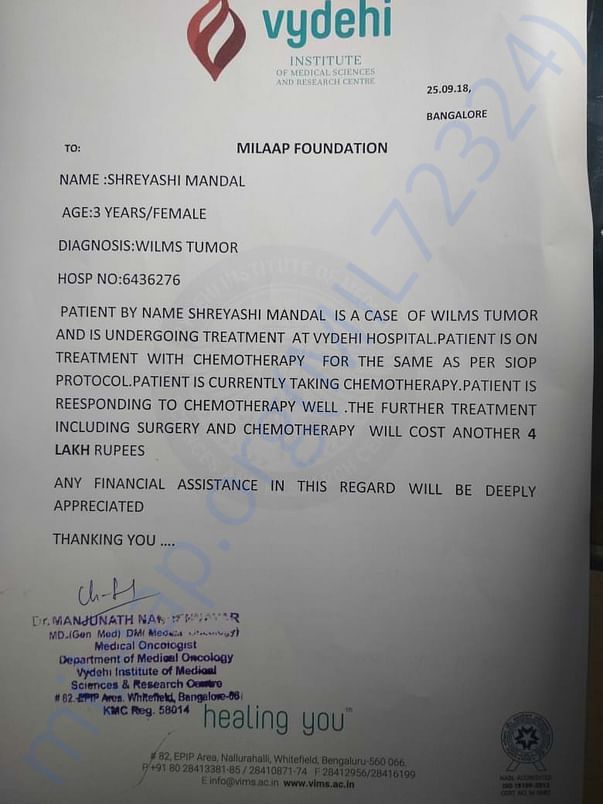 Shreyasi completed her treatment and she is doing fine. The remaining amount of $1,407.66 is being transferred to https://milaap.org/fundraisers/support-niloy-2 for his treatment. He is in his 3rd cycle of chemotherapy.

Your contribution has helped not one but 2 children. Thank you all!

Thanks a lot to each one of you for your benevolent contribution towards the treatment of Shreyashi Mondal. She has completed the full course of treatment and returning home in stable condition.

Thanks for the financial assistance and support in alleviating the sufferings of the patient.

We are grateful for the love and support shown towards Shreyshi.

She had a surgery last week to remove the tumor from her kidneys. She is doing well post the surgery and is being discharged in a day or two. After a week we are required to bring her back to the hospital to remove the stitches and we will know more about the treatment planned for her then.

Please continue to support her by sharing this campaign with your friends and family and keep her in your prayers!

Scan & donate with any app
check_circle_outline Download payment receipt
Report fundraiser
Know someone in need of funds for a medical emergency? Refer to us
Rs.150,242 raised 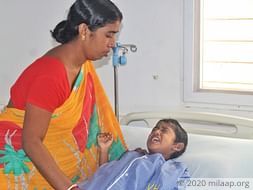