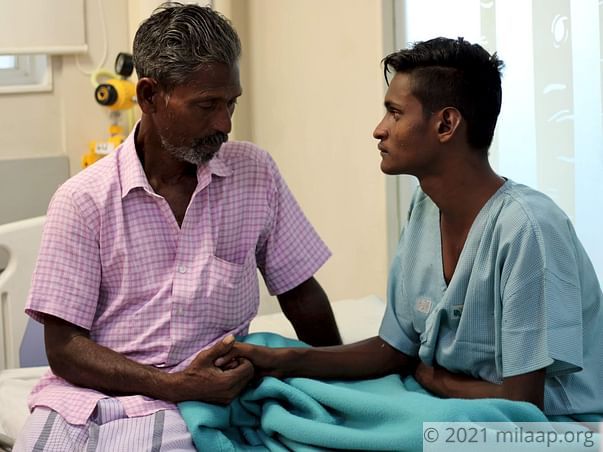 “Earlier, when someone asked him what his aim was, he used to tell them he’d be a doctor one day. But now, having lost the most crucial years of his life, he has given up. He tells them he has no dreams. His very future looks bleak, to him!” – Anthony Raj, father.

He dreamed of achieving bigger things in life, but every day is a struggle. He wanted to ace his 12th board exams, but never had a chance to even write them. His health mocks his love for sports. He aches to be independent, to stand on his own feet; but he can’t walk for long without help. His sickness has crushed all his dreams, and has left him hopeless.

16 days after he was born, he was baptized and the whole family was celebrating. But the very next day, he caught a severe cold all of a sudden. When he was rushed to the hospital, he was diagnosed with a hole in his heart, and the parents were devastated.

“Few weeks later, despite the medication, his hands, legs, eyes, lips, tongue and nails turned blue. We were told that a heart valve had shrunk and he needed a stent. But he was too young for an operation then. They suggested we did the operation later, and told us to take extra care of him - to never make him cry. Ever since, every time he cried, our heart would stop beating, till he stopped crying. We used to be terrified all the time.” – Anthony Raj.

Because of his health, Selvaraj had been confined to his house. But as years passed by, he seemed to get better with the medication. When he turned 9, he finally started going to school. But, having missed out on many years of education, he was put in class 1. Selvaraj worked harder than the others to compensate for the lost years. Only a few months later, his parents were told that he would be sent to class 4, along with kids his age. But his joy was short-lived. Just two years later, his body failed him, again.

“He was in 6th std. One day, when he was walking on the road, his legs twisted inwards all of a sudden and he fell down. When we took him to the hospital, the doctor said he needed 2 surgeries. One immediately, and the second one after two years. His first surgery was a success and he continued his schooling. He was doing well till last year, but one day, when he was playing, he fainted…” – Anthony Raj.

Selva lived a normal life until earlier last year. His health began to deteriorate again and he couldn't carry his bags. He lost his appetite and couldn't walk for long. The doctors concluded he had pushed his surgery for too long. He had to have it two years after his initial surgery, but because his parents couldn’t afford the operation then, it was pushed for later. It has been pushed for 7 years now, and it’s a question of life and death for Selva.

Being a labourer, his father is struggling to gather funds for the surgery

Anthony Raj is a daily-wage labourer who earns up to Rs.400 on days he has work. The family is neck-deep in debt with the money borrowed for Selva’s initial surgery. To add on to their misery, it has been two months now since he has gone for work. Heavy rains have kept him indoors and he has no source of income to even run his daily life. The surgery costs 6 lakhs and he is helpless.

“We used to live in a hut in a no man’s land till 3 years ago, for that was enough for us. But for Selva, I saved every rupee and built us a small brick house. It’s been 3 years now and we haven’t had the money to build windows. Whatever money we had, went for his medication. Rains flood our house. I don’t know what to look at, what issue to solve. I feel helpless. I can’t even think of gathering 6 lakhs! It’s huge!” – Anthony Raj.

Selva needs a surgery at the earliest. Only you can help save him.

Scan & donate with any app
check_circle_outline Download payment receipt
Report fundraiser
Know someone in need of funds for a medical emergency? Refer to us
Rs.12,463 raised 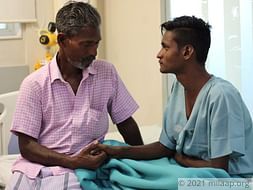