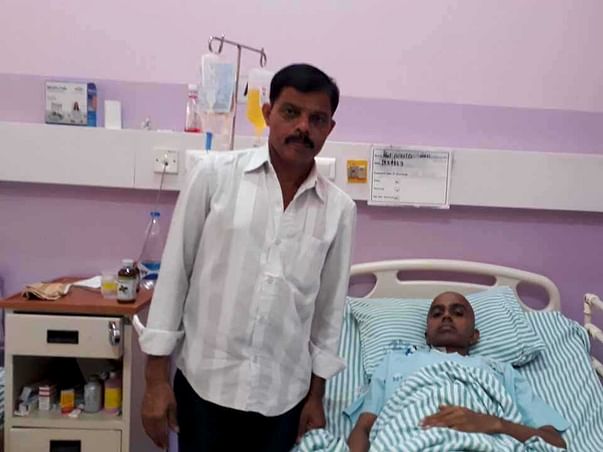 21-year-old Sanjith has a type of cancer that does not show any symptoms until it reaches an advanced stage. He made plans for his life unaware of the disease silently taking over his body until he was in debilitating pain. Sanjith has not been able to walk or even sit up straight. His battle strategy is a bone marrow transplant. The problem is, he cannot afford it.

Sanjith was excellent at academics.  He finished 2nd year PUC, and was about to enroll into a veterinary medical college. He got in on merit and was even awarded scholarships to help with the fee. Around the time, he would get extremely exhausted, complain of body pain and fever. We would consult a local doctor in Davangere to treat the symptoms.
I never realized then. For a long time, my son had been feeling weak. He would constantly have a high temperature and it would not subside for days. We neglected it thinking it was just fatigue. Suddenly, he began to have severe leg cramps. He was hardly able to take a step because of the pain.

Sanjith has one of the rare forms of cancer, and there is only one cure

We went to several hospitals over the past year. Every doctor prescribed medicines and said it would resolve. It didn’t. Finally, we landed at NH. Here, after a lot of investigation, Sanjith was diagnosed with MDS (Myelodysplastic syndrome). All we understood was – Cancer.
The doctor explained to us how this was no ordinary cancer. It was not in its initial stages. Chemo would not do the trick. Sanjith has a group of cells in his bone marrow that have not grown to be healthy. It causes low blood cell production. As he grew up, these cells were slowing down his system. The fatigue, infections and all other symptoms were from this disease.

It is heart-wrenching to see my son bedridden

As this is a basically a bone marrow failure. Sanjith needs bone marrow transplant. There is no other option. It is progressing so quickly, and we do not have much time before he begins to bleed out.
"Right now, my son is confined to his hospital bed, unable to sit up because of the pain in his backbone, unable to walk because his legs are in excruciating pain, and even unable to use the toilet to relieve himself."

We are asking for your help

I am a tailor making Rs. 8000/month. I was putting my son and daughter through school when this happened. All I was able to gather was Rs. 7-8 lakhs. The bone marrow transplant is estimated to cost Rs. 15 lakhs. I am knee deep in debt right now, and there is no one coming forward to help us in this time of need. I may be illiterate and have a low paying job. My son was going to have a better life.
"The people around us come only when things are going well in our lives. The minute it turned bad, they disappeared and even refuse to visit. They do not even see whether my son is alive."
Sanjith does not have much time and needs your contribution to stay alive.
Estimation Letter 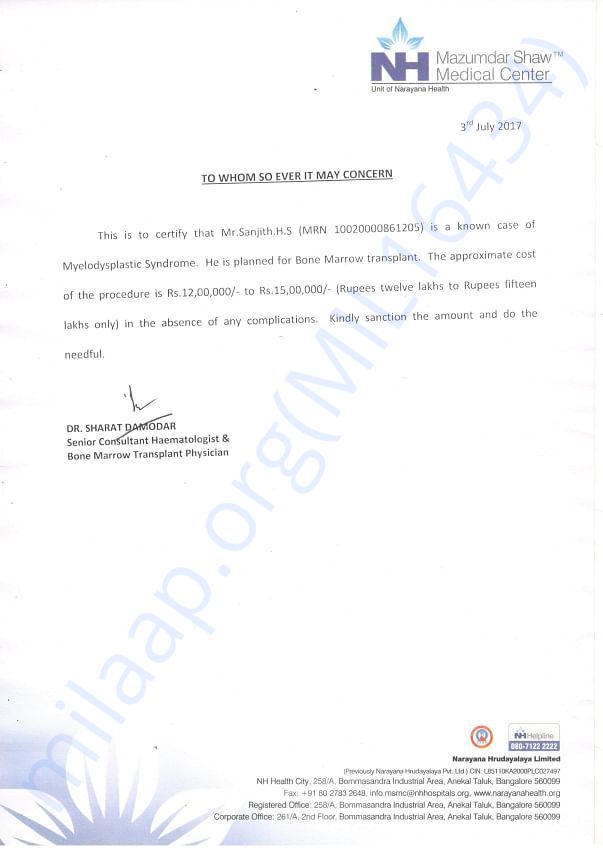 Donate
Report fundraiser
See how thousands are crowdfunding for their causes on Milaap
Rs.61,558 raised 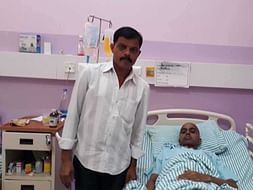