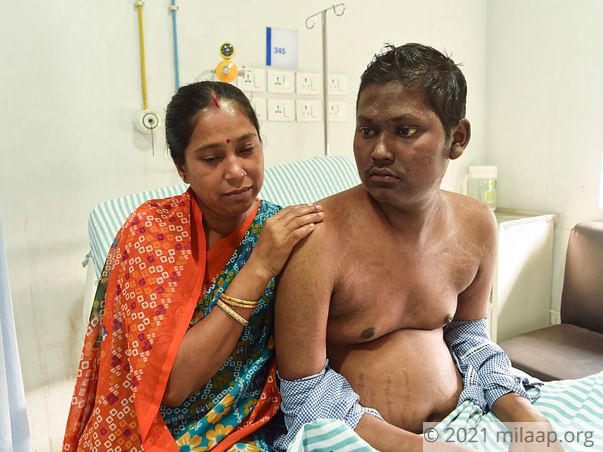 Share
We often come across stories of hardworking young people in newspapers who believe in walking the extra mile and realising their dreams. We read about them and admire their dedication but often forget that these shining stars live among us. Arabinda is one such youngster who has always worked extra hard to prove his mettle. Although born of poor parents, he has never let poverty come in the way of his aspirations. He has never been dependent on his parents for his college education. Ever since he got into college, he started taking tuition for little children in his neighbourhood and with that money he used to pay his college fees. Even now, when he is diagnosed with cancer, he has not lost hope. He consoles his parents and tells them that he will fight and win over this deadly disease.


It was a usual day for Arabinda when he left for college on a humid July morning after helping his parents with their shop. But in the evening, when he returned home, he wasn’t feeling fine. Soon he started running a temperature.
“He was tossing and turning in his bed with severe pain and had a very high temperature. The next morning we took him to a local doctor who asked us to get some tests done immediately. The X-ray of his chest showed that he had mass growing. Further tests confirmed that my son has cancer.” - Falguni, mother.

Despite a surgery, Arabinda is still not anywhere near the path to recovery
19-year-old Arabinda has been diagnosed with a cancerous tumour in his mediastinum. This is an area in the middle of the chest that separates the lungs. This area contains the heart, large blood vessels, windpipe, thymus gland, food pipe, and connective tissues. The doctors had told Falguni and her husband, Asto that Arabinda is in immediate need of a surgery.

“We borrowed money from our near relatives and arranged for the funds for his surgery. The surgery took place last month but even now he is not fully cured. Just a week ago, we had to admit him to the hospital as he had high fever and was throwing up everything that he ate. We see him suffering every day in front of our eyes and are unable to do anything. I know he is in a lot of pain but he doesn’t complain to us. Every night I go to sleep with the prayer that he gets well soon - it is the only thing I can do.”
A small tea-seller, Arabinda’s father doesn’t have the means to afford his son’s life-saving treatment.
Asto and Falguni together run a small tea shop in Ramrajatala in Howrah, West Bengal. They earn about Rs 7000-8000 per month. Their meagre income is not even enough to help their son with his higher education, leave alone getting him treated.


“He is tied to his bed and is so weak that he can hardly do anything on his own. I know he feels like a burden on us and blames himself for the disease. But we are very helpless - we have already borrowed Rs 3 lakhs and have no one else to turn to for help.”

How you can help
Arabinda is fighting cancer and despite a surgery, he is not getting any better. The doctors have told that chemotherapy is now their only hope but his poor parents are unable to afford the treatment. Your generous contribution would help Arabinda get back to his studies and bring back his lost happiness.