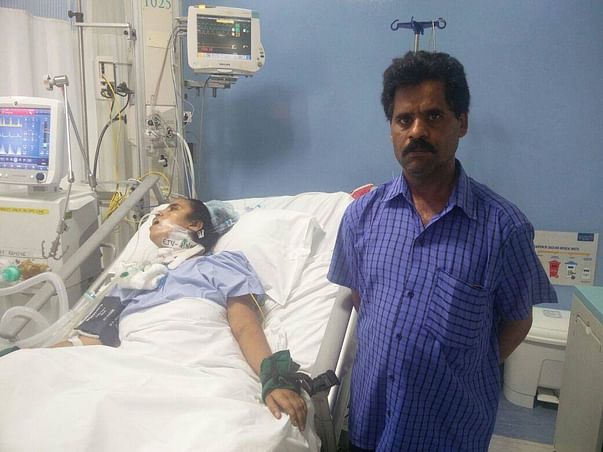 Share
"Wherever I rushed for help, they said she was beyond saving. That, now it is just a wait for her to pass. I could not take that answer. I had to believe she had a fighting chance! They did not even know what was wrong with her!"

34-year-old Meenakshi came down with a fever and a cold on 18th February 2017. Her husband took her to the clinic for a consultation, where a simple blood test suggested she may have the flu. What Meenakshi really had turned out to be more than just the flu. She's currently in an ICU at Columbia Asia fighting to stay alive, with the ventilator breathing for her. This family needs assistance to save Meenakshi from drowning on the inside.
Rame Gowda is a driver who moved to Bangalore from a village near Hassan over 20 years ago. Here, he married a woman (Meenakshi) who was perfect for him in every way and together they created a special world with two children. This April would be their 17th Wedding Anniversary, and they were planning to celebrate it with their 13-year-old son and 9-year-old daughter.
"Meenakshi had a fever. We normally go to the doctor for medicines, don't we? So I went. Blood test showed she had something like the flu. They said she may need drips for two days. She was about to get discharged in an hour or so, and exactly then she had trouble breathing. We got so anxious. She began to turn blue because she could not catch a single breath."

"I rushed to ESI hospital and Saptagiri. Neither could figure out what was wrong with her. All they said was that they could not save her, and that she was too far gone. I was not ready to take that answer. I asked around and finally brought her to Columbia Asia. They gave us hope."

If Rame Gowda had reached CA even 5 minutes late, Meenakshi would have lost her life. Her condition was critical. She was immediately moved to the ICU and started on respiratory support. They began evaluating her situation and diagnosed that her lungs were filling up with fluids, literally drowning her from within.
It does not happen very often in adults. Meenakshi had Acute Respiratory Distress Syndrome secondary to Pneumonia with no coexisting illness. Her lungs had become extremely weak, and all they could do was keep her on the ventilator until she could breathe on her own again. When she still had difficulty, a tracheotomy was done.
"Before she could speak a little, now because they have put it in her throat, she is unable to speak. She listens to what I say. I understand what she needs and how she is feeling. She is very scared. So am I. We are a small family. Without her, I feel helpless. There's no-one to take care of our children. She has been our rock! I don't know what I would do without her!"

Rame Gowda is a driver who gets Rs. 15,000 a month. They live in a rented house and pay for their children's tuition. He had Rs. 70,000 in savings which he has spent on hospital bills, and couple of lakhs borrowed from acquaintances to pay off medical expenses that have mounted to Rs. 5.6 Lakhs over the past three weeks. The cost for her treatment is estimated at Rs. 12 lakhs.
"My employer has helped as much as he can, and some people have been kind to loan us money. But I don't know how I can arrange for more money to help save my wife. I just want her to fight through this and stay alive. They gave us hope, and I don't want to lose it because I cannot pay up."
Meenakshi's son is preparing for his 10th board exams. Her daughter is worried about her mother being absent. Her life is also dependent on the contributions to this campaign.

Donate now and save this wife and mother.