Sairatan's Doctors Fundraise For His Thalassemia. Support Them Now. | Milaap
This campaign has stopped and can no longer accept donations.

Sairatan's Doctors Fundraise For His Thalassemia. Support Them Now. 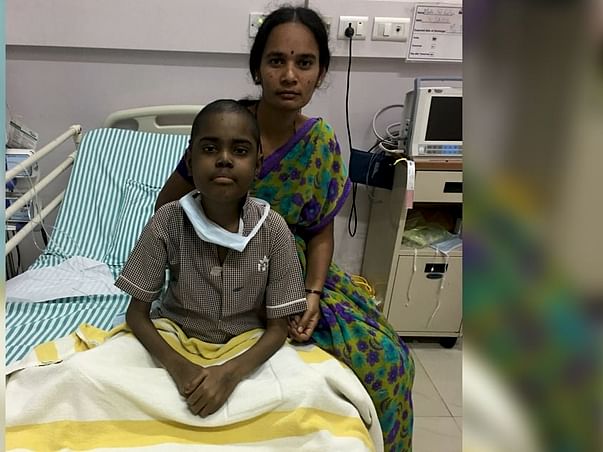 Master Sai-Ratan is an adolescent boy who was diagnosed with Beta-Thalassemia major at a young age. In this genetic condition, the body cannot make red blood cells properly. Due to this he needed red blood cell transfusions every 3 weeks since a very young age. Though he has survived because of transfusion therapy, he also was developing iron overload (a condition in which there is excess iron storage in various organs which is damaging to the body. It is an expected effect with repeated blood transfusions). He was on medication to control this increase in iron in his body. His parents have diligently cared for him for many years.
Bone marrow transplantation is the only known curative treatment in this condition. He underwent bone marrow transplantation (BMT) three months ago. He has developed a few complications after the BMT but has come out of them with determination and focus to get back to health. He is an ideal patient a doctor can ask for in terms of his motivation to get better, ability to follow advice and compliance to necessary treatment despite the natural fear/ anxiety related to medical procedures. His parents are always by his side, may it be providing comfort or  arranging finances. With overwhelming worry and fear about his ongoing well being, they are running out of funds to support his ongoing care. His path of recovery has had hurdles every step of the way but we all have been teaming up to overcome them.
Currently he is struggling with adenoviremia (a type of viral infection seen in patients with decreased immunity, can be detrimental in the post bone marrow transplantation  period). This virus has also affected his urinary bladder due to which he is passing blood in urine with extreme pain. Some nights he is unable to sleep due to severe pain despite getting pain medications.
We want to give him treatment with a medicine that works against this virus. It is named Cidofovir. It has to be imported and is very expensive. We, Sai-Ratan's team, want to start this campaign to raise funds to be able to buy this medication and continue his ongoing care. The estimated cost is around 12 lakh rupees. If he can tide through these early difficulties, he will be able to ride bigger and better waves in his lifetime. He can become a successful and contributing member of our society.
Prescription 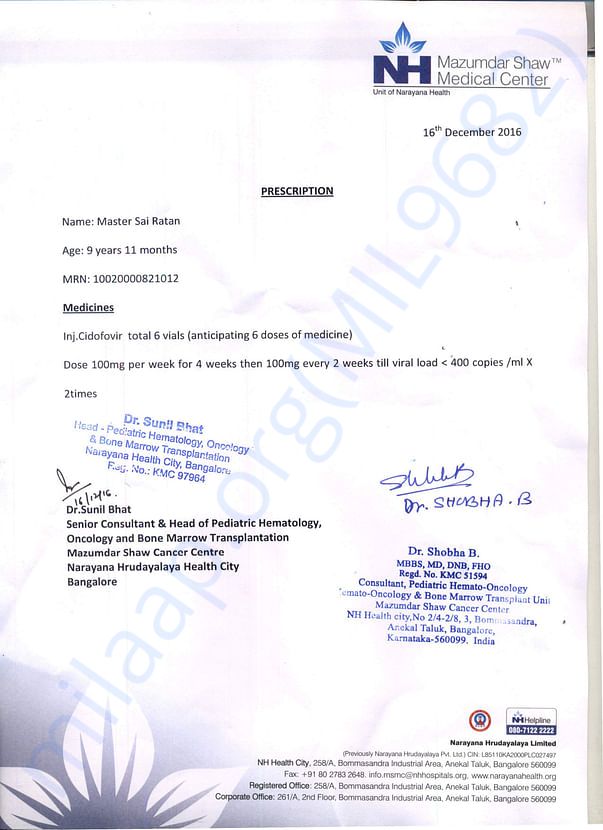 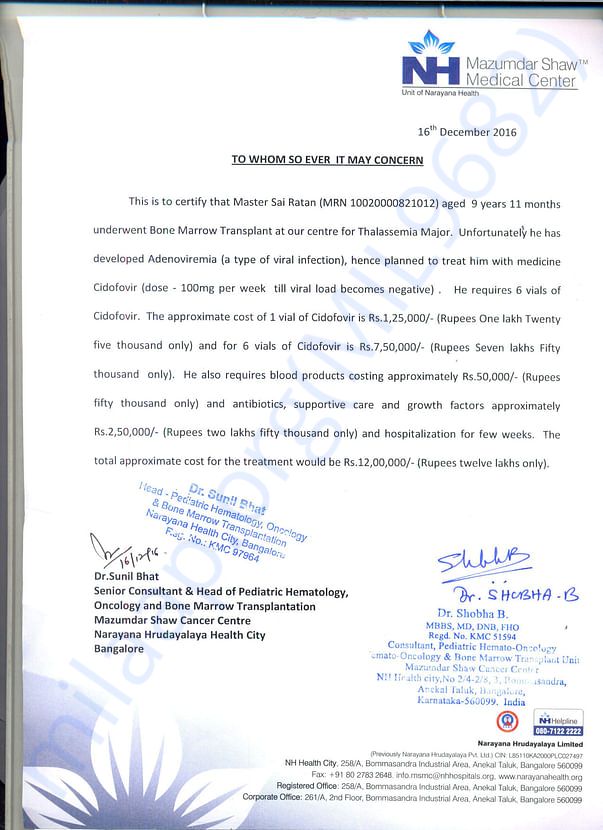 We would like to thank you all for the contributions to provide the highest quality of care to Sai Ratan.

Unfortunately, despite the medical team’s best efforts, he passed away on 26th February 2017. He stood strong even though he suffered from serious urinary infections for the last couple of months. However, his condition began to deteriorate rapidly since early February.

Lately, he became very weak and fragile. He had severe pain while passing urine. The viral infection spread leading to multi-organ failure. For almost 8 days, he was on ventilation and was given blood transfusions.

Sai Ratan had the greatest will to fight back. However, he was very scared and could not withstand the treatment. Despite prolonged efforts, he could not be revived and passed away on 26th morning.

We once again thank the donors for their support. May his soul rest in peace. We pray the family finds strength in this time of grief.

Team Milaap
Donate
Report fundraiser
See how thousands are crowdfunding for their causes on Milaap
Content Disclaimer: The information and opinions, expressed in this fundraiser page are those of the campaign organiser or users, and not Milaap.
If such claims are found to be not true, Milaap, in its sole discretion, has the right to stop the fundraiser, and refund donations to respective donors.

Donated to this campaign via Paytm? Click here if you can’t find your donation listed below.
SD
Suresh donated Rs.2,000

Donated to this campaign via Paytm? Click here if you can’t find your donation listed below.
SD
Suresh donated Rs.2,000 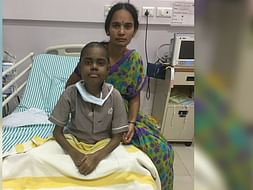 Sairatan's Doctors Fundraise For His Thalassemia. Support Them Now.