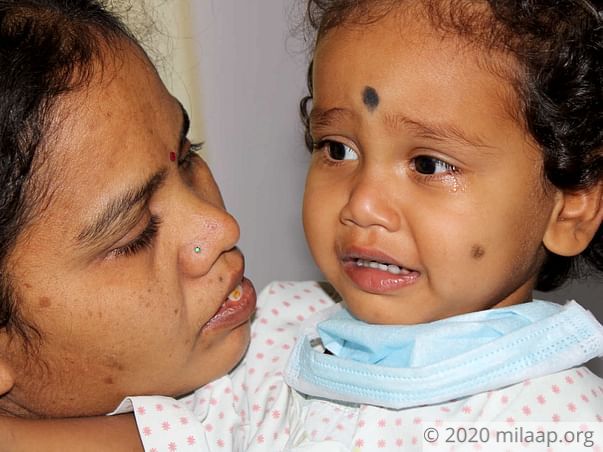 Madithati is everyone’s favourite. Whether it’s her family, neighbours in her village, and now the doctors and nurses in the hospital. The once playful and cheerful child would talk to everyone. In fact, when Madithati was first taken to the hospital for tests due to continuous fever, she was playing and laughing even then. But that first injection changed her life.

“We found out our little girl has cancer last month. She has not been the same ever since. Injections have become a part of her life. Her smile has disappeared. All she does is cry out in pain.” – Suguna, mother

They told us that without chemotherapy, we will lose her

Baby Madithathi fell sick for the first time, last month. Her parents, Ravi and Suguna thought that the fever would subside with medicines but it kept recurring. In a week's time, she got boils on her neck and had breathing troubles. Ravi and Suguna rushed her to a local hospital. The doctors took several tests and found out that it was no mere infection - the 2-year-old has blood cancer.


" She was admitted in the local hospital for a week, her fever and breathing trouble was under control. We were hoping that the doctors would say that she is fine, but we were told that without treatment we would lose her."- Suguna

Baby Madithati before her diagnosis

She hasn't left the hospital since her diagnosis

All it took to bring a smile on baby Madithati's face was to take her outside. She enjoyed playing or even being taken for her walk by her father. However, ever since her cancer treatment began, she hasn't left the hospital. Madithati is now in Bangalore undergoing chemotherapy. She is very prone to infections and is restricted to the four walls of the hospital.


"If she sees the nurse carrying injections in her hand, she starts crying out loud and tells us she doesn't want it but otherwise when they come to see her, she smiles at them. We have just started the treatment, I dread to think of all the pain that lies ahead of her. But this is the only thing that can save her." - Suguna

"I will do anything to see her smile again, but I'm helpless"

Ravi is from Kadapa district, Andhra Pradesh. He works as a technician in an X-ray lab. He earns around 10,000 per month. He was living a modest life with this income but it became extremely difficult for him to manage the expense after his daughter's diagnosis. He managed so far with the help of his friends and he is neck deep in debts now. He needs 10 lakh to continue the treatment and it is beyond his means. He needs your help to save his daughter from cancer.


"I want to see my baby smile again, I want to see her play like she used to. Cancer has made her so weak and frail. I will do anything to save," - Ravi, father

This young couple had so many dreams for their 2-year-old daughter but now all they wish for is that she recovers from cancer. With your help, she can live a normal life

UPI: givetoravifundd1@yesbankltd (Copy to clipboard)
Or
Click here to read the instructions before you make a bank transfer. 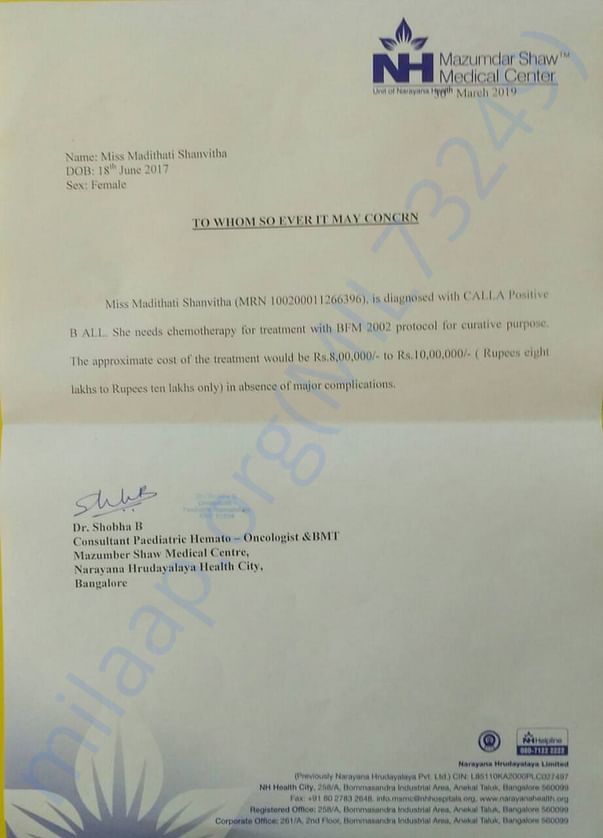 UPI: givetoravifundd1@yesbankltd (Copy to clipboard)
Or
Click here to read the instructions before you make a bank transfer.

Madithati was on IV antibiotics and she is stable now. She has been discharged now and will visit the hospital for follow ups.

Madithati is undergoing chemotherapy plus follow up treatment. Do keep him in your prayers.

Report fundraiser
See how thousands are crowdfunding for their causes on Milaap
Rs.196,641 raised

Jesus will heals u all recovery soon

Jesus will heals u all recovery soon 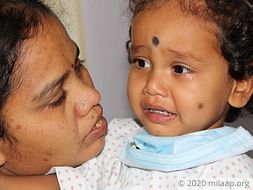