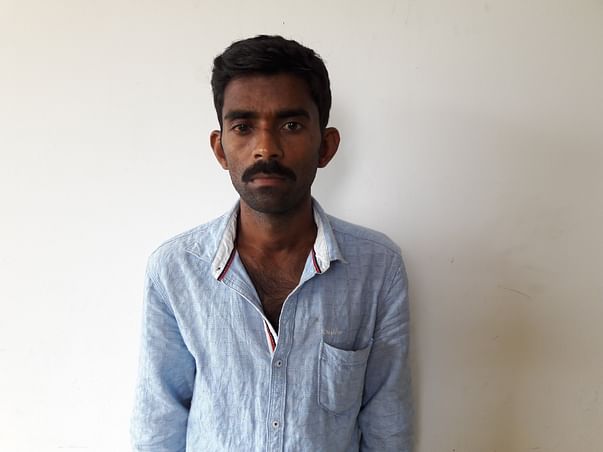 Kempegowda is a 31-year-old driver who has not been able to work for the last four years because both his kidneys have failed. He needed a kidney transplant but due to the lack of funds managed his condition with dialysis once in three days. But now, even that is not enough and his condition is getting worse. He needs an urgent kidney transplant. His wife Savitha is willing to give her own kidney to save Kempegowda and end his suffering.

Kempegowda's parents have already lost a son to kidney failure

“We never expected that he would get sick. His elder brother Ravi died 15 years back due to kidney failure. But he had always been sick. When my husband started showing the same symptoms, his parents became very scared that they would lose him too,” says Savitha, Kempegowda's wife.
Kempegowda and Savitha are going through a very tough time due to his illness
Kempegowda was 27 when he first fell sick. It started as intermittent fever, exhaustion and weakness. In 2013, he was told that his kidneys had stopped working and that he needed a transplant. Till he got the transplant – he woud need dialysis once in two days.
A transplant would cost lakhs of rupees and so Kempegowda tried to manage his condition with dialysis. But his father was an epileptic patient and they needed funds for his treatment and for living expenses as well. Kempegowda's condition has worsened now  and he is now unable to do anything. He has nausea and vomitting and needs to take constant rest. A kidney transplant is his only way out

Sometimes Kempegowda misses dialysis because there is no money

Kempegowda lives on the outskirts of Bangalore with his wife, two children and his parents. He worked as a full-time driver and his wife worked in a garment factory. They did not earn much, but they were confident they could easily educate both their children. Unlike the two of them – their children would finish school and go to college.
Once Kempegowda fell sick, the entire financial burden has fallen on his wife. Savitha has quit her job at the factory and taken up a lower-paying job at another factory. The new job pays her less but allows her to take time off when Kempegowda needs to go to the hospital. They even agreed to keep her job after the transplant.
At the moment, Savitha makes Rs 6,000 per month. She needs to spend Rs 3,500 on rent alone. With the rest, she pays for food, dialysis and daily needs.  The family has spent over 3.5 lakhs on the treatment so far.

“I manage with a lot of difficulty. Sometimes, he puts off dialysis for a day. It is very painful for him – but there is nothing to do because we don'thave money. We are getting by only because I borrow money from people every month,” she says.

Kempegowda is in the final stage of kidney disease. Even dialysis is not helping and he is very weak – due to nausea and vomitting. Only a kidney transplant can save him and end his painful suffering.
Make a contribution to help Kempegowda as well as his family.