4-year-old Hasini suffering from bone marrow cancer needs your help | Milaap
This campaign has stopped and can no longer accept donations.

Hasini is a 4-year-old with an aggressive blood cancer. If she gets treatment, she has a good chance of getting better. But her family's resources are dwindling and they are finding it very hard to continue Hasini's treatment and need help saving her.

Since June, Hasini has been undergoing Chemotherapy which will continue for a total span of six months.  She has already finished two months of chemotherapy and has another 4 months to go in order for her to fight the cancer.
Hasini with her parents Suresh and Sujata at the hospital
For 4-year-old Hasini to have already undergone 2 months of Chemotherapy, it has taken a toll on her body and she is growing weaker and weaker day by day.  Further medications are required to help her recover.
Hasini's Dad coaxes a rare smile out of Hasini who is otherwise very scared of hospitals
While Hasini's parents are worried about their daughter's health, they have an added concern to think of as well. They are not from Hyderabad, which is where Hasini is undergoing treatment. Hence, they have added expenses of accommodation in Hyderabad.  Hasini's parents are struggling to pay for her treatment. Now, after paying for 2 months they have exhausted their funds but are not yet ready to give up on their daughter.
“We got her new books and notebooks for school, she was so excited. Now, she has become very quiet. The minute we enter the hospital gate – she stops talking. She cries when they take blood from her or give her injection, but otherwise, she says nothing. It really hurts to see her so scared,” says Suresh.
Suresh has sold what little gold the family has and is now considering selling his small home too to save Hasini. But even if he does that – what he gets will still not be enough to complete Hasini's treatment. Through his sorrow, he feels unable to save his sweet, happy child.
Hasini is very scared of the doctors and doesn't like talking in hospitals
How Can You Help
Suresh lives in a small room in Hyderabad with his wife, Hasini and Hasini's 1-year-old sister Varshini. Their daily expenses have become a big struggle for the family and they really need a helping hand. Contribute and give Hasini a chance to beat cancer that has taken away her childhood. 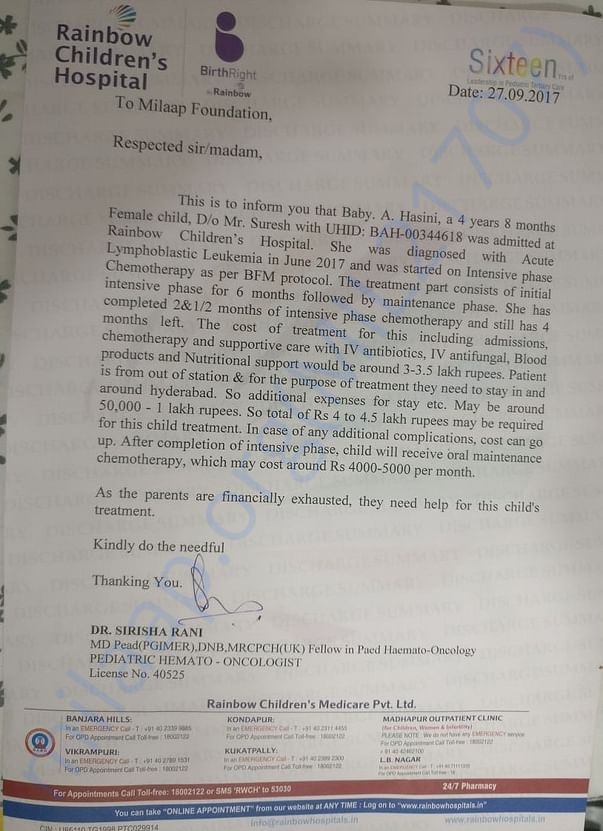 Thank you for the immense love and support shown towards Hasini!

She is currently at home and doing well. She is under medication and visits hospital for her regular follow ups.

Thank you for the immense love and support shown towards Hasini!

She is currently at home and doing well. She is under medication and had a round of radiation therapy last month. Her reports are normal as of now. She has to continue treatment for the next 6 months.

We are hopeful she continues to recover in the same pace. We are grateful to each of you as we could not have gotten this far without your love and support!

Here is an update for you all.

She was discharged 3 months ago and and Harshini is happy to stay in the confines of home. She is not going to school but enjoys playing with her sister daily.

For next 2 years she should regularly keep visiting hospital so that health progress can be tracked.

Thank you so much for the love and support.
Regards.
Load more
Donate

Scan & donate with any app
check_circle_outline Download payment receipt
Report fundraiser
Know someone in need of funds for a medical emergency? Refer to us
Rs.678,947 raised

324 Supporters expand_more
This campaign has stopped and can no longer accept donations.
$150 Million +
Raised on Milaap
Are you in need of financial support for medical or personal emergencies, or a social cause?
Start a fundraiser
Or
Know someone in need of funds for a medical emergency? Refer to us
Campaign organizer contact_mail
DS
Dr Sandhya
Beneficiary: A. Hasini info_outline

Donated to this campaign via Bank transfer/QR Code? Click here if you can’t find your donation listed below.
AS
Amitava donated Rs.2,500
A
Anonymous donated Rs.500
MK
Munmun donated Rs.1,000

I Pray god gives required strength to Hasini and her family. All my best wishes and love:)

Donated to this campaign via Bank transfer/QR Code? Click here if you can’t find your donation listed below.
AS
Amitava donated Rs.2,500
A
Anonymous donated Rs.500
MK
Munmun donated Rs.1,000

I Pray god gives required strength to Hasini and her family. All my best wishes and love:)

DS
You are sending a message to
Dr Sandhya
Go back 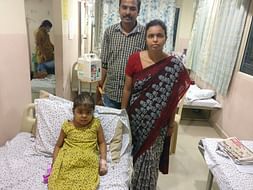