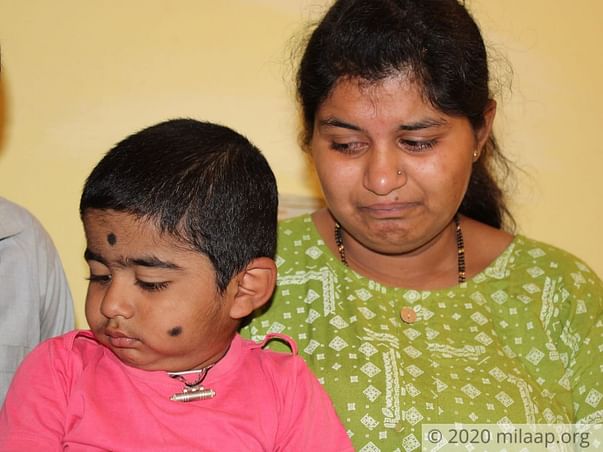 “They say being a mother is the best feeling in the world. When I was pregnant with Chandan, my happiness knew no bounds and when I held him for the first time in my arms, tears rolled down my cheeks. I am pregnant for the second time now, I want it to be an equally happy occasion. But will it be? My Chandan...what will happen to him?” - Kavya, mother of 3-year-old Chandan.

One month ago, Chandan's stomach started bloating all of a sudden, and at just 2, he was dangerously overweight at 17kgs. He struggled to breathe and gasped for breath all the time. He couldn’t eat food and passing urine hurt him so bad that he’d wince in pain.  His family didn't realize he was battling cancer.

They had thought it was simple indigestion

“Last month, his stomach became as hard as a rock, and it started swelling. The doctors gave him a tonic for indigestion, but even a week later, there was no change. When they scanned him, they told us he had a tumor that weighed 1kg…We could not believe our ears! But now, I wish it had just been a tumour!” – Kavya.

Soon Kavya and Shashidhar found out that their son is suffering from Adrenocortical carcinoma – a rare cancer of the adrenal glands, that resulted in excessive production of hormones. An excess in hormones leads to the early growth of the reproductive system, amongst other organs, as was the case for Chandan.

His condition was getting worse, he needed immediate surgery

In a matter of days, Chandan became critical. He couldn’t breathe, he was admitted in the ICU. His blood pressure shot to 140, and his creatinine level increased exponentially. Only an immediate operation could save him.

“I could no longer see his pain. It was too much. The doctors told us there was no way to remove the tumor without affecting the kidney. So they had no choice but to remove the kidney as well. His cancer has slowed down but he still needs treatment,"- Kavya.

There is a cure to little Chandan’s cancer, but his parents can never afford it

Shashidhar owns a small mechanic shop in his village, that fetches him no more than Rs. 6,000 a month. Torn between a pregnant wife, an unborn child, and his dying son, Shashidhar is helpless. He is afraid he will fail.


“My husband is doing everything he can. But he has used up all his savings. Chandan needs the treatment immediately and there is nothing we can do. Sometimes, I just end up crying in front of him, fearing what it is in store for my son and for our unborn child...We need your help to save our family,” - Kavya.

Your generous contribution can save little Chandan