Chemist Who Lost His Job Has Only A Week Left To Save Son | Milaap
This campaign has stopped and can no longer accept donations. 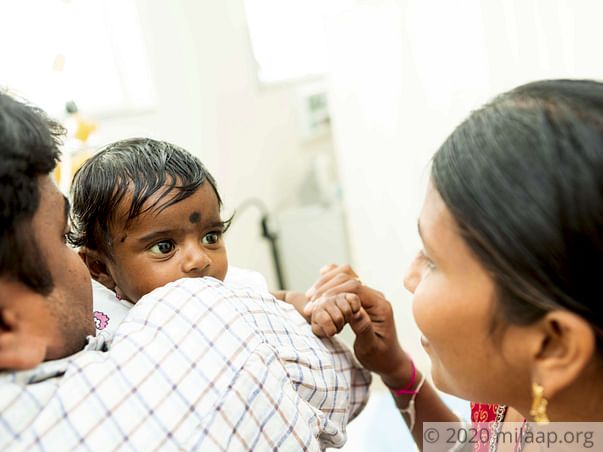 “They had given us 2 weeks to get the liver transplant. We already lost a week. Today he started bleeding through his nose. It is not stopping. His stomach is completely bloated. He has a very high fever. He is sleeping so much that I am scared he will go into a coma.” - Mohan

Mohan, a chemist at a local pharmaceutical firm, cannot stop blaming himself for his 3-month-old son’s plight. Anvith was born with a liver condition. The family has just 15 days left to fund a transplant to save him. Mohan was not even able to afford medicines, let alone keep his son in the hospital. It may have cost Anvith his life.

Anvith was born at a local hospital in Mancherial district. They thought he had pneumonia, so he was treated for the same. After 15 days, Rashmitha noticed he was yellow. He had jaundice and was admitted to a children’s hospital for a month.

“Everyone told the family that it is common and that we were overreacting. They did not see that my son would vomit as soon as he drank milk. His langoti was filled with white stools. A baby’s stools can be any color, not white. He was so weak and he would cry all the time. So, we went to a hospital in Hyderabad for help.” - Rashmitha

Anvith was diagnosed with Biliary Atresia, his bile duct is blocked. While a simple surgery could have resolved the issue, the time lost in trying to get help resulted in liver damage. He was weak, and needed vitamin injections. Every 10 days Anvith needed to be admitted for tests and treatment. This was just a temporary measure. Anvith needed a liver transplant.


“We could not afford it. He needed medicines for the pain, to sleep, and stop the disease from affecting other organs. His stomach would bloat so much that every few days we had to  go to the hospital to remove the fluid. We kept travelling to Hyderabad for every 10 days for treatment, but travelling with a sick baby for 6 hours in a bus was the most difficult task. He normally vomits. The crowd and the rough ride only made it worse. When the brakes of the bus were pressed, no matter how tight I held him his swollen stomach made him cry in pain.” - Rashmitha.

No job, no money, and just a week left on the clock to save Anvith

Mohan used to work in a pharmaceutical company as a chemist and earned Rs 15,000 a month. Unfortunately, he lost his job recently as he couldn’t get back to work. They sold their gold and spent all their savings on the baby’s treatment. Travelling and medicines alone costed them around Rs 8,000 for every visit. Until now they have spent 2 lakhs. The parents are ready to be the donors to save their baby but they cannot afford the expenses of the transplant which costs 18 lakhs.

Anvith liver is non-functional, filling his blood is flooded with toxins. He is prone to infections. He already has a fever. His blood is not clotting. He itches until he bleeds and now he bleeds through his nose as well. Soon, this disease will affect his brain, and he will be comatose.

5-month-old baby Anvith is in a very critical condition and any delay in the transplant may result in his death. Your kind contribution can save his life. 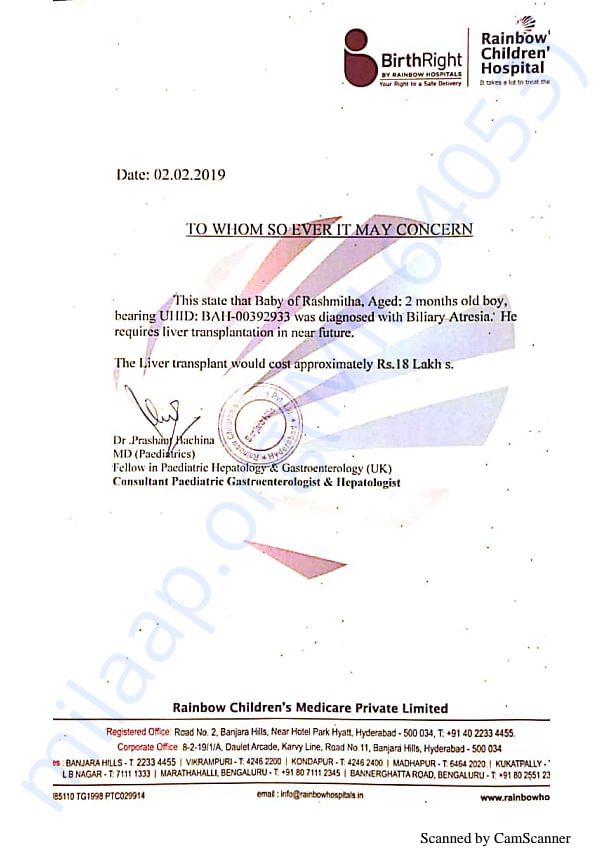 We have some unfortunate news to share with you all. Anvith is no more with us. The doctors tried their best but Anvith could not make it through because of high damage to his liver. All the funds raised have been utilized for his medical expenses.

Thank you for your support. We pray for his soul to rest in peace.

Baby of Rashmita is now named as Anvith is getting ready for liver transplant. Father, Mr.Mohan Kumbhan is the possible donor. He is undergoing the thorough evaluation as donor. We shall keep you posted.

Baby of Rashmitha is undergoing pre-transplant evaluation and donor basic tests. Please keep her in your prayers.

Stay strong. All the best

Stay strong. All the best 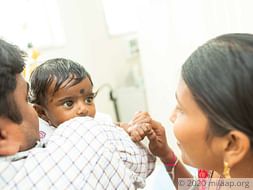