Severe Infection Will Spread From Baby’s Intestines To Her Entire Body | Milaap
This campaign has stopped and can no longer accept donations. 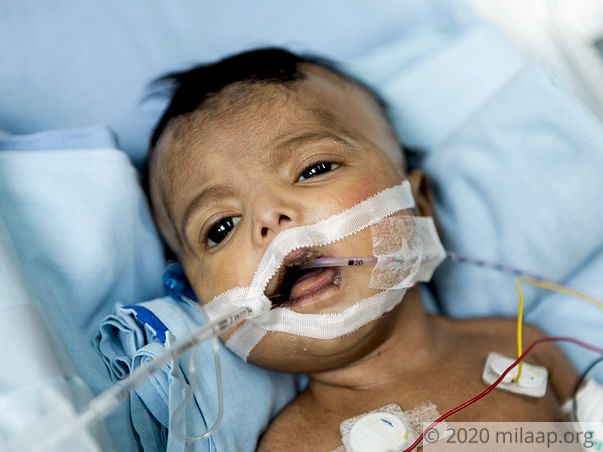 Every time Deshaboina Lakshmi sees other parents happily walking out of the hospital holding their newborn baby, tears gush out of her eyes. But unlike them, she cannot take her baby girl home. All she could do is just watch her baby girl lie unconscious in the intensive care with her body covered with wires and tubes. It’s been 34 days that she’s brought into this world and she has already undergone 2 surgeries because of her underdeveloped intestines. Post surgery, the baby developed severe infection that is on the verge of spreading and her parents aren't able to continue her treatment.

‘I was told before the delivery that my baby will need a surgery, but I didn’t know she would need two.’

Just a month before her delivery, Deshaboina was told that her baby had underdeveloped intestines when they went to the local doctor for a regular checkup in Mahbubabad, Telangana. The doctors told her baby will need a surgery soon after her birth. Though she was scared at first, yet she underwent a C-section and delivered a baby girl. 2 days after her birth, she underwent a surgery and was undergoing treatment in ICU. But 20 days after the treatment, the doctors found out that a part of her intestine was blocked, because of which she wasn’t able to drink milk.

“I thought after the surgery she would be completely fine and have a healthy life like other babies. But I was wrong. I was devastated when the doctors told she needs one more surgery. She was barely a month old and she had to undergo one more surgery. It’s been really difficult for me to see my baby go through all this and it’s even more difficult for her to suffer so much.” - Deshaboina, mother

The infection is spreading and she needs continued treatment in ICU

Because of severe complications, the parents were advised to take their baby to Hyderabad, Telangana for better treatment. As a part of the intestine was blocked, the baby underwent one more surgery. A few days after the surgery, she was diagnosed with necrotizing enterocolitis, a devastating condition where the intestines are invaded by the bacteria causing infection and inflammation in the intestines. The baby is currently undergoing treatment for the infection. She needs to stay in ICU for 2-3 weeks otherwise the infection will spread into her entire body.

“We don’t talk much about our baby. Because we know, if we talk about it, we’ll break down. My wife and I have decided to stay strong for our baby. We’re just silently praying for our daughter to get better.” - Srujan, father

Srujan works in a private company earning a decent income that was well enough to take care of his family of three, including his son Dharunsai (4). Since his daughter’s birth, Srujan has spent all his savings and the insurance funds. And now, after spending Rs 7 lakhs in just one month, he’s seeking help to continue his daughter's treatment.
Estimation letter 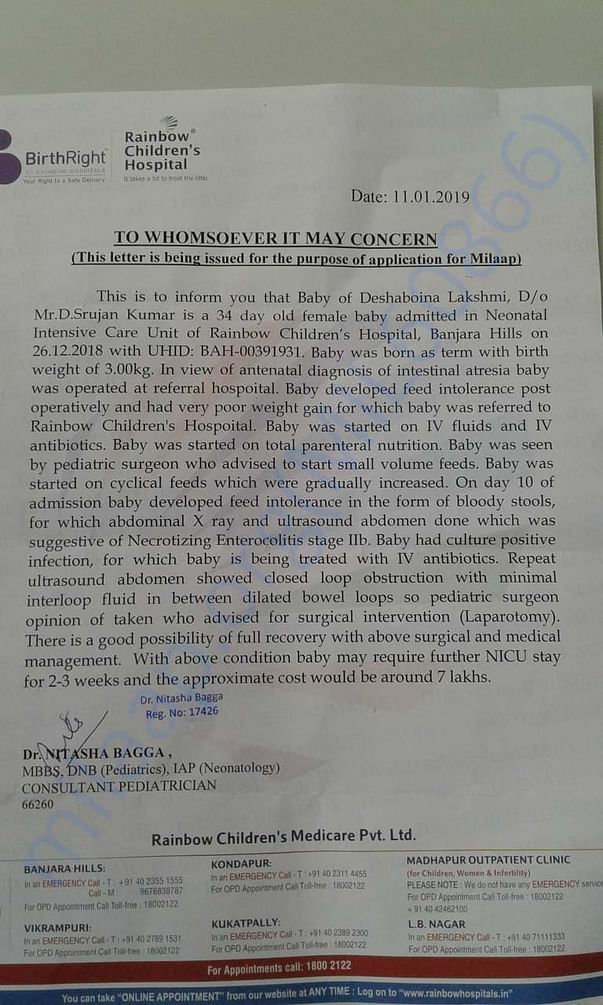 
Baby of deshabonia is discharged and is doing well. Baby is recovering and is responding well to the treatment.

Thank you for all the wonderful support. Here is an update on the baby's health.

Milaap Impact partner has offered to contribute 20% extra on every payment that we receive  until 4th Feb. For every ₹1,000 that you donate the impact partner will donate an additional ₹200.

Once again, thank you for all the love and support and please pray for her speedy recovery.

Report fundraiser
See how thousands are crowdfunding for their causes on Milaap
Rs.628,911 raised

Donated to this campaign via Paytm? Click here if you can’t find your donation listed below.
NV
Naga donated Rs.1,750
A
Anonymous donated $50

Hoping for the speedy recovery of the baby.

Donated to this campaign via Paytm? Click here if you can’t find your donation listed below.
NV
Naga donated Rs.1,750
A
Anonymous donated $50

Hoping for the speedy recovery of the baby. 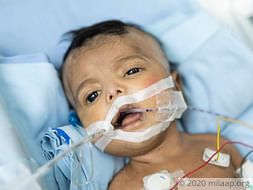