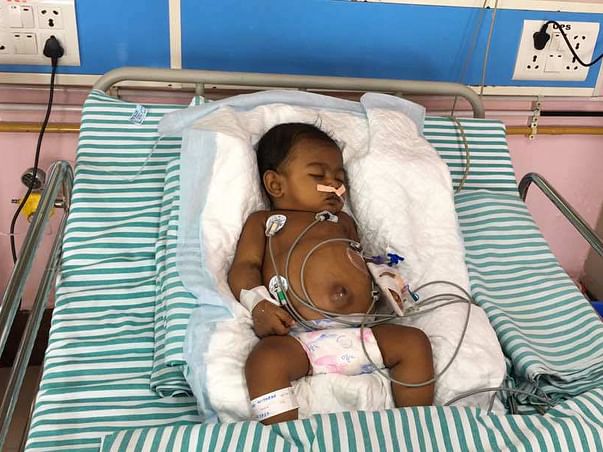 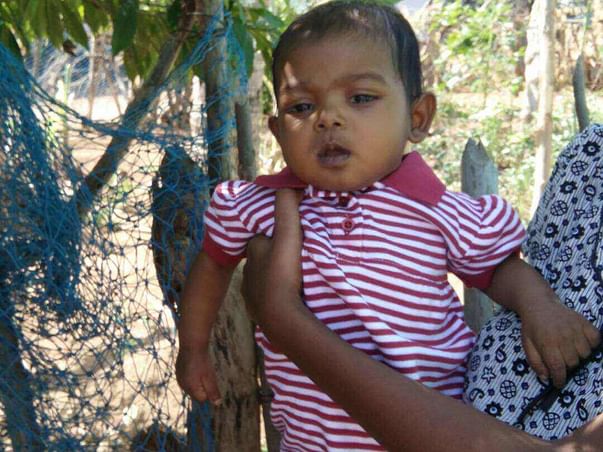 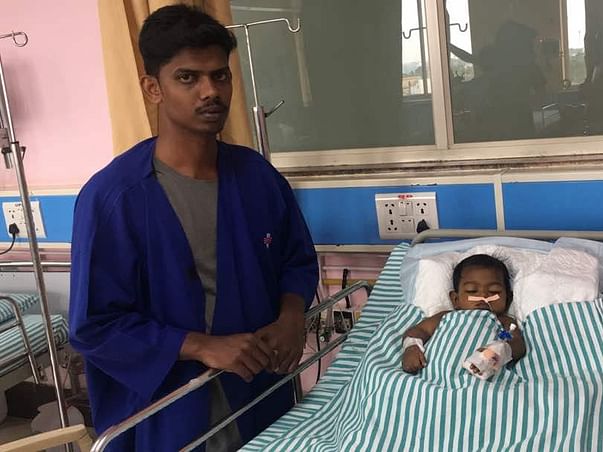 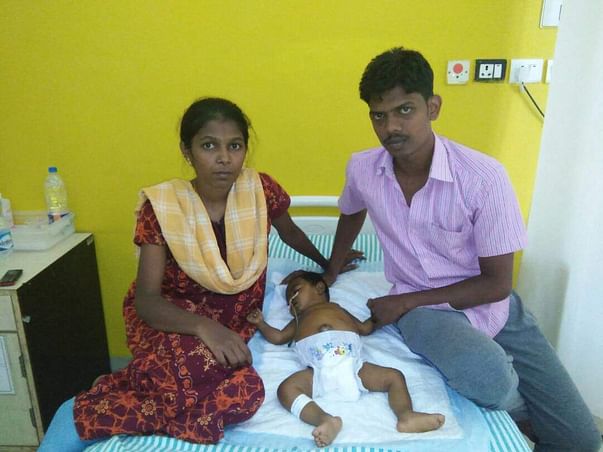 Share
“I am not able to hold my own child!” - Muthulakshmi

For Manikandan and Muthulakshmi, the past few months have been a nightmare. They had a baby boy on September 7th 2016, but the joy was short-lived as he was diagnosed with Biliary Atresia. Today, Baby Mithra is fighting for his life with acute chronic liver failure and needs an emergency liver transplant at the earliest.
Originally from a small village near Thirunelveli, Manikandan is now shuttling between Bengaluru and his hometown every few weeks in hopes of saving his son’s life. It all began when the doctor suggested that their baby had jaundice right after he was born.
“No parent ever wants to hear that something is wrong with their newborn. With our heavy hearts, we saw our baby being poked and prodded. The tests came back clean. He was fine. 3 months later, I noticed that his eyes were pale yellow. Again we rushed to the hospital, but the tests came back with negative results. The doctor suggested we take a closer look at his liver, and that is when we found out that his liver was enlarged, and his bile duct was blocked. Mithra has biliary atresia.”
Manikandan was working as a lecturer for over a year. Right when Mithra was diagnosed, Manikandan’s father had a stroke affecting his left side. He had to take a leave of absence from work to care for his father, and extend the same to care for his son. Eventually, he was forced to quit his job. Now, he is dependent on his older sisters to care for his family.
“We got the tests done at CMC where they said that a transplant was our only option. Hoping there would be another way, we brought our baby to NH Bengaluru. Here, the doctor verified the results and put him on medication. They said we can observe how he responds for a month and then move on to the transplant option.”
Every few weeks, Manikandan brings his son to this city for a followup. Unfortunately, last week, their bus collided with a lorry, injuring several passengers including Manikandan and his family.
“Muthulakshmi has a leg fracture and several bruises because of broken glass. I have several superficial injuries because of the glass. But, the person I am most worried about is Mithra. He has a head injury. We rushed him to the hospital where they performed a CT scan. He was in the critical care unit for 4 days after which they moved him to the ICU. He opened his eyes only two days ago. Yesterday they moved him to the general ward. The doctor said there is nothing to worry about as far as his brain is concerned, but the trauma did affect his liver. His condition is getting critical by the minute. His stomach is bloated, filled with fluid. He has an acute liver failure and he needs an emergency transplant.”
Manikandan has been matched as a donor, and Mithra will be cleared for surgery once he recovers from the injuries. Muthulakshmi is by his bedside 24x7. These parents are grief-stricken over the fact that they cannot hold their child. Muthulakshmi’s condition does not allow her to embrace him, so she just holds his hand to feel better and make the baby feel safe.
“He has become heavy because of the fluid retention, so it is difficult to lift him or hold. The staff doesn't let us hold him. They only call me to assist when we have to change his diaper or clean him. Muthulakshmi cries because she cannot do any of this. I understand how she feels. Which mother can bear to be in her shoes?”
Manikandan is not just in emotional turmoil but is also going through financial difficulties of having to pay for the transplant without which his son will lose his life. He has spent over Rs. 3 Lakhs so far by mortgaging their house and selling all of his wife’s jewellery and is now out of resources. He needs over Rs. 15.6 Lakhs for Mithra’s liver transplant and has nowhere to go for help.
“I have stopped thinking, stopped feeling, because if I do I will break and the people around me – my wife, sisters, father – will break. I need to stay strong. I have to find a way to save Mithra. He is our first child. He needs to survive this. He is just a baby. No baby should go through so much pain.”
You can help change Manikandan’s fortune. Life doesn’t seem to give him a break. You can choose to not only save his son’s life, but also change his entire fortune.
Your contribution is the chance Mithra is waiting for, the chance to survive and grow up into a healthy young man.