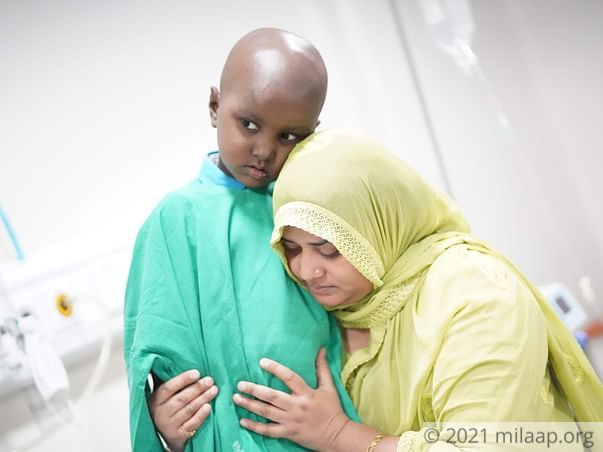 Share
Hadisa and Rizwan are distraught. They feel like Allah is testing their patience, they feel as if their tough times are never getting over. The couple lost their 1-year-old baby girl only six months ago. They didn’t even get the chance to mourn their daughter’s death when they got to know that their 6-year-old Asad is battling death - cancer is growing inside their little boy’s body.

Asad (left) with his brothers

Asad’s new books, new bag lie unused in the corner of their house

Little Asad has just got promoted to a new class. He was excited about his new books and his new school bag, but all of that now lies unused in the corner of their house. Asad has been in the hospital for the last five months. He is undergoing treatment for anaplastic large cell lymphoma - a rare type of blood cancer.

“The swellings were visible first in his neck and then they started spreading to his armpits and to his groin. He had a high fever and even getting up from the bed became difficult for him. When we took him to the hospital, they admitted him to the ICU,” - Hadisa, mother.

After 20 days of stay in the ICU, Asad is now slightly better. But he needs continued chemotherapy.

We can’t pay our children’s school fees anymore, they will be asked to leave soon

Farhad and Ayan - Asad’s brothers are back at home. They are upset and miss their little brother. But they’re hopeful that he will come back and go to school with them. However, these poor kids don’t know that they might be asked to leave school soon.

“It’s been months since we have paid their school fees. There’s no way we can. Our savings, the little money I used to make on a daily basis would go for Asad’s treatment. These days, I haven’t been able to work. I am always needed at the hospital,” - Rizwan, father.

Rizwan sells garments on the road - his meagre income is hardly enough to feed his family. But he has been trying hard to not stop his son’s treatment. Now, it is getting very difficult for him to afford around 5 lakhs more.


These parents are desperate - they need your help. That’s the only way they can save their son from cancer.