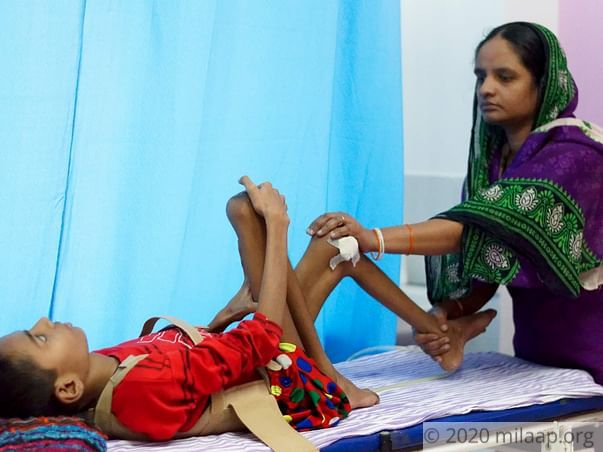 "All his younger cousins are even scared to come near him now. How do I explain to them that he is the same Arshad they used to play with? He has been reduced to flesh and bones in front of my very eyes. He can't move. He eats more medicine than food. Only words that come out of his mouth are 'Ammi hum ko theek kar do jaldi se' (Ammi, please cure me fast)"- Rashida, mother

If you look at Arshad, you will not believe he is 14 years old. It will be even harder for you to believe that a year ago, he was running on those two legs - the same legs that lay motionless now.

The very surgery he went through to save his life, has bed-ridden him

Back in 2017, Arshad used to complain about pain in his back. His parents thought it was because of the heavy school bag. They put an ointment, gave him painkillers. Over time, an injury mark with swelling on his back became a matter of concern. After getting all the reports, Arshad's parents found out he has Bone Tuberculosis - one that has affected his spine, bone and joints. His parents were told to get it operated as soon as possible. After arranging 3 lakhs from their savings and loans, they finally got the surgery done in August, the same year.


But after a month, Arshad started slouching and was unable to sit at all. He couldn't go to school and gradually was unable to get up from his bed on his own. Tests revealed parents that during the surgery, his nerves were damaged due to carelessness. They took legal action too, but they soon ran out of funds.

"I ran from one doctor to another, asking how could they do this? How could they put my child's life at risk like this? It's been 2 years but I still haven't got my answer. My child is on a stretcher 24x7. His legs are numb. His bones are protruding. It is my fault, I should've consulted more doctors before the surgery but I didn't. Now, my son is paying the price with his life. Please Allah show some mercy on my only son."- Mustafaque, father

Arshad hasn't moved out of his bed for 2 years

Arshad was a happy and cheerful kid, always active in sports. Now he hardly speaks, tears roll down his cheeks. He has asked his parents to not let his friends come over to see him. He is reminded every moment of how his life used to be - happy and carefree.

"If there was one wish Allah gave me right now, I would just ask him to make all our worries disappear. I've spent 2 birthdays like this, unable to even cut the cake from my hands. I still wet the bed sometimes. Somehow, every day feels like a year to me, but I know my Ammi- Abbu will cure me soon, so I'm just waiting for that day." Arshad (14)

Arshad needs surgery in the next 3 days to correct his deformity. If he gets it done soon, he will be able to stand on his feet again. But if he doesn't, it will be too late, he will be bed-ridden for life. This is his only shot at walking again but his parents can't afford 5.5 lakhs for it.

His father makes kites for a living and earns Rs.3000. He has not been able to work because it is difficult for his wife to carry Arshad alone everywhere on a stretcher. He is living on borrowed money from relatives and now his condition is such that he doesn't even have a track of the number of people he has borrowed from.

Please save 14-year Arshad from being paralyzed for life.

UPI: givetomlpmustaque2@yesbankltd (Copy to clipboard)
Or
Click here to read the instructions before you make a bank transfer. 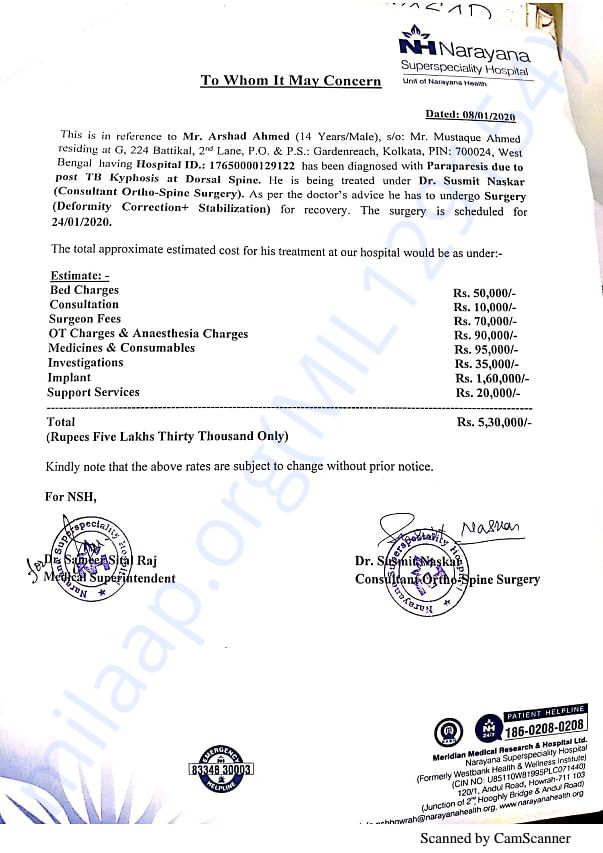 UPI: givetomlpmustaque2@yesbankltd (Copy to clipboard)
Or
Click here to read the instructions before you make a bank transfer.

Report fundraiser
See how thousands are crowdfunding for their causes on Milaap
Rs.342,083 raised 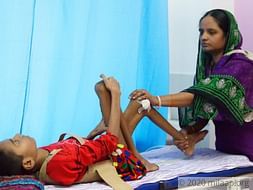