Help 10-Year-Old Harsh Undergo A Liver Transplantation | Milaap
This campaign has stopped and can no longer accept donations. 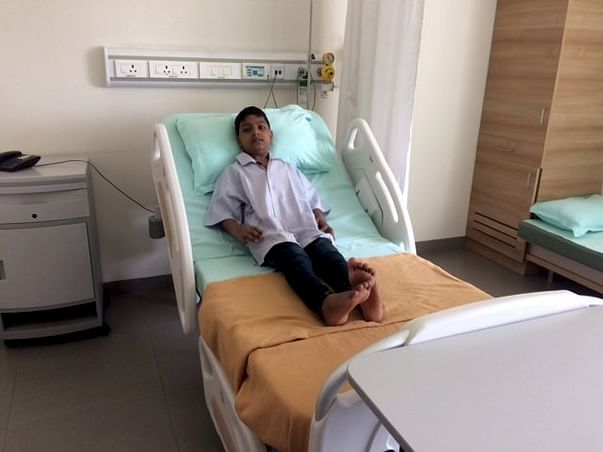 Harsh Dhembare is like any 10-year-old: bright, friendly and full of curious questions. He was promoted to the 6th standard a few months back, but the poor boy has not attended school in months now. Travelling to and from his house in Mumbai for treatment in Bangalore, now, all the little boy longs for is a relief from the searing pain, and to go back to his normal school life.

2 years back, Harsh was diagnosed with Wilson’s disease.

At 8, Harsh started having terrible pangs of pain and swelling in his stomach. His parents ran from doctor to doctor trying to understand what the problem was. He was finally diagnosed with Wilson’s disease, that leads to the accumulation of Copper in the body, impacting mainly the liver.
“When I found out my son has a life-threatening medical condition, I was shattered, but sadly I could not even afford any time to cry over it. I had to arrange money from somewhere even to get him treated and keep him alive,”
Due to this condition, Harsh’s liver has been effected terribly. He has frequent episodes of severe pain. For almost 2 years, Harsh’s condition was regulated by medicines

The medicines went out of stock, and his condition worsened.

“The medicines were really difficult to get, and we had to order it online. Then, for over 2 months, the tablet went out of stock, and we had to helplessly watch his condition degrade. Since this is a rare medical condition, it is not easy to get treatment as well” says Harsh’s father Santosh.
Unfortunately, these 2 months left an irreversible effect. Little Harsh’s liver was damaged beyond repair.

He now needs an urgent liver transplant to stay alive.

Harsh’s liver cannot hold up for too long. He has been given 50 transfusions of white blood cells over the past 2 months. He must urgently undergo a transplant. Fortunately, his mother has been found to be a perfect match!
The transplant would cost the family about 7.5 Lakh. Santosh is a farmer and has already spent more money than he had.

“The doctors say my son can live. After all this struggle, if I still cannot save him I will never be able to forgive myself for not having enough money to be a good father,” Santosh cannot even stand the thought of losing his son.
Harsh’s condition is constantly worsening. He must undergo the transplant within days to stay alive. Any contribution to this this fundraiser will give Santosh a better chance to save his son.
Estimation Letter 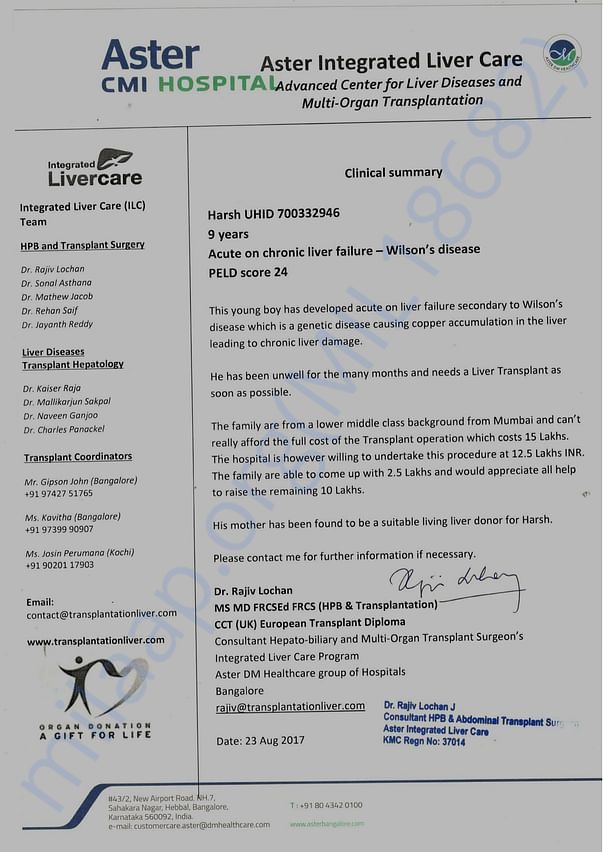 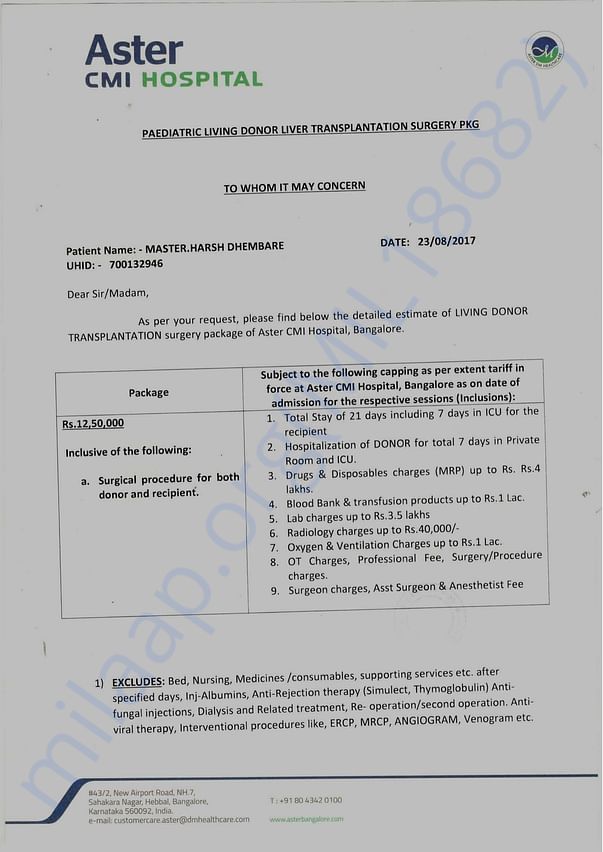 We thank you for your love and support. This was only possible because of everyone of you.

We both are doing well now and Harsh is still on some minor medicine. Both of us are at home and here are some latest pictures.

Again thank you for your relentless support

Thank you for all your love and support. This couldn't have been possible without you.

Harsh is doing better now. The doctors are observing him closely for any irregularities. He undergoes a blood test every 15 days. The mother, who was the donor, is also doing well. We have been told that Harsh may be able to go to school once he recovers a little more and gains more strength.

We are all hopeful about his recovery. Please keep praying. Thank you once again.
Dear Supporters,

Here is an update on Harsh.
Harsh has undergone his transplant yesterday and he is doing fine.
After the sudden shock of losing his father, his family rallied around to give Harsh and his mother the support they needed to go forward with his life-saving operation. We are all rooting for his early recovery.

Thank you for your support and love. Please keep him in your prayers.

Please find his recent photo below;

Report fundraiser
See how thousands are crowdfunding for their causes on Milaap
Rs.1,000,000 raised 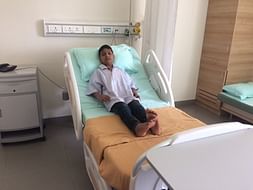