Go Push Go- 450 Kms for Climate Justice and Fairtrade | Milaap
Milaap will not charge any fee on your donation to this campaign. 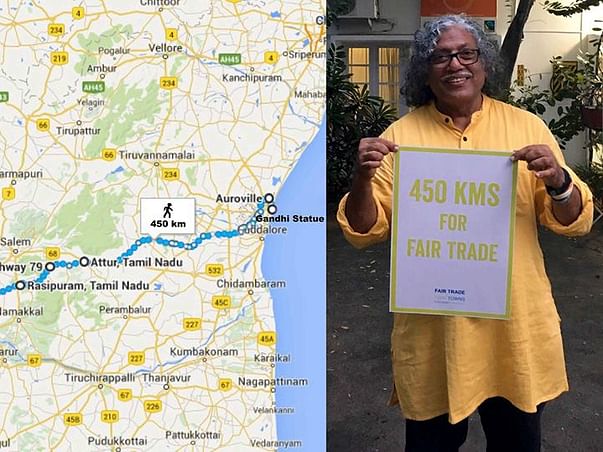 Walk for the Earth:

We have seen marathons, walkathons, endless debates for raising awareness on a pressing matter - climate change. Now we'll see a one man army, who'll bring awareness on climate change, by walking 450 kms.
Climate change, a global issue is affecting farmers around the world. Changes in the weather patterns, temperatures, and rainfall are causing havoc with the agricultural cycles.
Puspanath Krishnamurthy - better known as Push - wishes to draw attention towards the impact of climate change on small and marginal farmers through the Fair Trade movement. The 64 year old will be walking 450 kms for this cause. We are fundraising to bolster the programmes for climate adaption and mitigation for marginal farmers in India and to support the Fair Trade movement in India.
Push launched the Fair Trade Twin Towns movement in Pondicherry and Auroville at the start of his journey, on 20th November 2015. The movement is a massive grass roots initiative which will aim to get people to support Fair Trade and in turn, support marginal farmers. Push will be visiting some Fair Trade producer organisations and other civil society supporters of the movement, during the course of his walk.

The walk will coincide with the Climate Change conference being held in Paris, from 30th November to 10th December. The conference's objective is to achieve a legally binding and universal agreement on climate, from all the nations of the world. Pushpanth says, “The poorest of the poor are worst affected by climate change and this is going to be a defining moment when the world leaders meet to decide the future of our earth.”

So join Push in building the Fair Trade movement in India and help the farmers in India tackle climate change!

Pushpanath Krishnamurthy is a veteran campaigner for trade justice and empowerment of marginal farmers, artisans and workers.

With over three decades spent doing development work across three continents, Push has spent much of his professional career at Oxfam, where he has acquired a reputation for pioneering work on campaigns such Make Trade Fair, the Climate Change Hearings, and campaigns for HIV/ AIDS etc. An accomplished communicator and storyteller, Push takes complex issues and popularizes them for grassroots constituencies, using a blend of traditional advocacy and new approaches. He bring grassroots experience from regions across East Asia, Southern Africa, the Balkans, the Caucasus, and India. With a background in development studies and agricultural science, he also brings  expertise in anti-poverty programmes, refugee rehabilitation, sustainable livelihoods, agricultural finance, disaster preparedness, and environmental assessment

Fair Trade is a grass roots movement which connects consumers to producers to enable fairer trading conditions for the marginal farmers and workers. Therefore, for the success of the initiative, it is critical to empower producers as well as to educate and engage the consumers about the issues and how they can make a difference through their everyday choices.

What do we plan on doing with the funds?

Fairtrade is working with over 80 producer organisations across India, supporting them to earn a better income of for the farmers and better working conditions for the agricultural workers. 75% of the funds raised would be used to conduct organisation specific risk and needs assessment, arising specifically from climate change. Based on these needs assessment, climate adaptation and mitigation training and workshops would be organised.

The remaining funds would be used to organise workshops, work place engagement programmes, schools and universities programmes to educate consumers about the issues faced by farmers and how they can make a difference in the lives of marginal farmers and workers, through Fair Trade.

Donated to this campaign via Bank transfer/QR Code? Click here if you can’t find your donation listed below.
M
Maya donated Rs.10,000

All the best for your project!

Pushpanath, my friend, my father, my inspiration. God speed , the world needs more people like you.

All the best! This is undoubtedly a very cause. Appreciate your dedication.

Donated to this campaign via Bank transfer/QR Code? Click here if you can’t find your donation listed below.
M
Maya donated Rs.10,000

All the best for your project!

Pushpanath, my friend, my father, my inspiration. God speed , the world needs more people like you.

All the best! This is undoubtedly a very cause. Appreciate your dedication.

AJ
You are sending a message to
Abhishek Jani
Go back 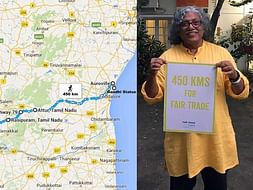