Gayathri Has Been Dying Of Tumor, And No one Came To Her Aid Until Now | Milaap

Gayathri Has Been Dying Of Tumor, And No one Came To Her Aid Until Now 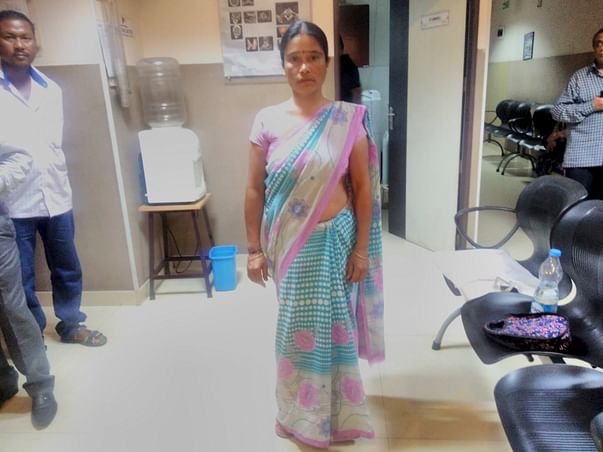 "My wife has been managing her headache with medicines for 4 years now. It got unbearable, and that's when we found out it was a tumor. Since then, there has not been a hospital we have been to or a doctor we have begged for help. Nobody gave us a real solution until she collapsed in pain and we rushed to Sita Bhateja as a last resort. They say she needs a surgery immediately to remove the tumor or I will lose her. We cannot lose her!"
Sandeep and Gayathri are from a small village in Assam, where they live with two children. Here, Sandeep is a daily wage laborer making Rs. 5,500 every month to support his family. He has been working harder ever since they welcomed his second child a few months ago.

"My son is still breastfeeding. We left him and my daughter with Gayathri's mother when we rushed to the hospital. They are too young to understand all this. They are too young to lose their mother."
4 years ago, Gayathri began having headaches. She went to the rural hospital where she got a prescription to manage her pain. About a year ago, around the same time she was pregnant, her pain became unmanageable. The doctor suggested an MRI which revealed a tumor on her brain.

"The hospital was not equipped to deal with her problem. So, we left to Guwahati for treatment. We have switched several hospitals where they gave varying solutions. Some said surgery, some said medication. No medicines helped her pain."

As for surgery, the quote was always over Rs. 3 Lakhs and Sandeep could not afford it. They finally landed at NIMHANS where Gayathri went through the battery of tests for the third time. The doctor put her on medication again and said she needs to be monitored for three months after which she can be evaluated for surgery.
"We came back from NIMHANS that day, and the next night at 10PM Gayathri collapsed in unbearable pain. When I went back to NIMHANS, I saw other patients in state worse than her still waiting. I rushed her to Sita Bhateja begging for help."

Dr. Revathi surmised that Gayathri's condition was serious. She needs an urgent surgery to remove the tumor. The estimated cost is Rs. 1,50,000. Sandeep is unable to afford it after having spent Rs. 1,30,000 with the help of friends, family, savings and loans for the treatment so far. He resources have dried up and he is in dire need of financial assistance.

"Right now Gayathri's condition has further deteriorated. She loses her consciousness and does not wake up for a while. We are at the hospital and hope someone helps us before I lose her forever."

Gayathri's children will be greatly impacted by anything that happens to her. You can help save her life. 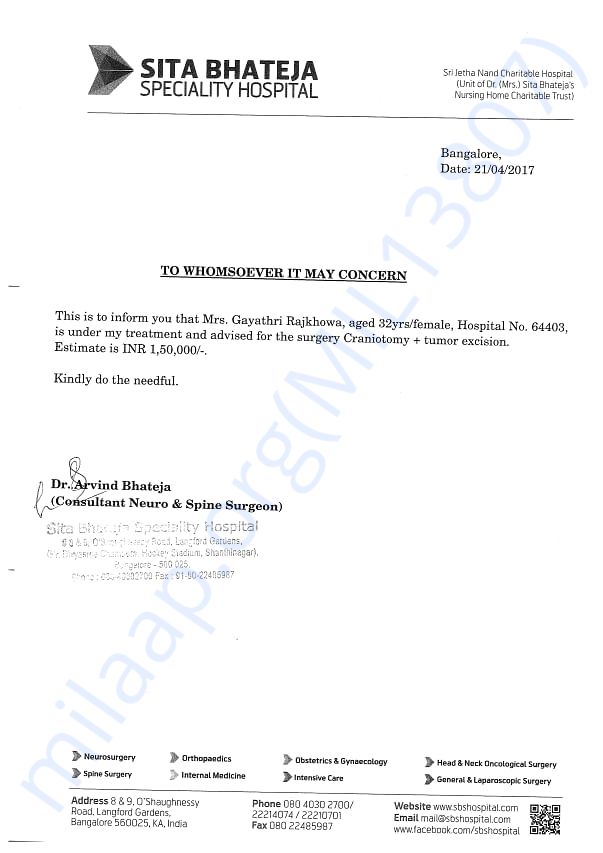 Donate
Report fundraiser
See how thousands are crowdfunding for their causes on Milaap
Rs.56,126 raised

May God bless her, cure her...

May God bless her, cure her... 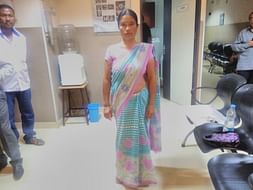 Gayathri Has Been Dying Of Tumor, And No one Came To Her Aid Until Now