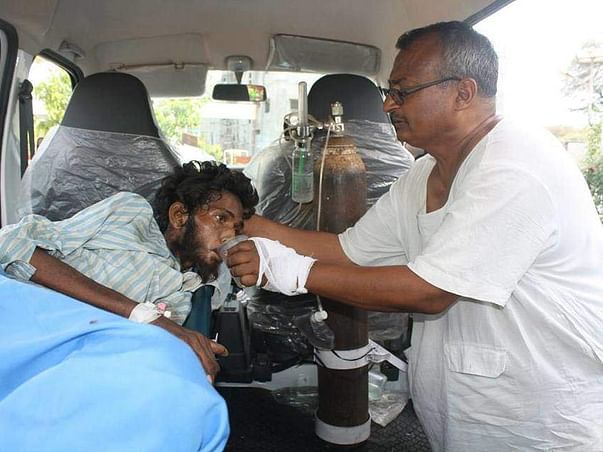 Share
Born in Indore Madhya Pradesh on 19th August 1957 to a well-known family of Ujjain, Sudhir Bhai Goyal was influenced by the teachings of Swami Vivekananda and Mahatma Gandhi very early in life. He has been involved in social service since 1970 (at the age of 13) when he started a school at village Ajnoti. The sufferings of a mentally ill uncle, a mentally unsound grandmother, pathetic condition of one of his friend’s disabled brother and the sight of a freedom fighter begging on streets urged him to do something for these needy people.
He wanted to become a doctor. Meeting with Acharya Vinoba Bhave in 1976 changed all that. In which Acharya Vinoba Bhave told him that the soul of India was in its villages and in fact true service to humanity lay in serving in the villages.
He established Sewadham Ashram in 1989 to provide a lifetime shelter to suffering underprivileged, disadvantaged, dying and destitute people with immense love, care, and compassion. He left no stone unturned in his efforts to provide safe shelter, nutritious food, health care, medical support, safe drinking water, special education, personal and overall hygiene, sanitation, vocational – skill development and self-reliance training with rehabilitation for those in need following a five-point doctrine of Sewa, Shiksha, Swasthya, Swavlambanand, Sadbhav with & Environment Protection.
Sewadham has successfully completed 31 years of its selfless services to suffering humanity. With a humble beginning of serving one resident in 1989 in a mud hut, Sewadham has grown considerably and is home for 650+ residents today. Sudhir Bhai stays with his family within the ashram premises and finds peace in caring and loving ashram residents; dedicated to providing the best services to the 650+ suffering unfortunate souls. Sudhir Bhai sees God in the smiling faces of ashram residents.
Men, women, and children who had been abandoned in a helpless condition in the bus, railway stations, roads, and hospitals have all found loving care and attention in Sewadham. Since inception in 1989, it has been a home for more than 7000 such people irrespective of caste - creed and religion, suffering from chronic or terminal diseases like Cancer, HIV, AIDS, TB, Paralysis, Polio, mental illnesses, physical handicaps and dying and destitute people have benefitted from Sewadham. That’s not all; its humanitarian efforts provided the vision to 500 people through eye donations; organized around 250 eye and health camps benefiting over 2lakh people. It has donated more than 150 cadavers to medical colleges helping future doctors in making and carried out last rites of over 1500 people as per their respective religious beliefs.
Sudhir Bhai Goyal has a vision that in 2020 Sewadham Ashram should have adequate infrastructure facilities for 1000 abandoned – homeless – disabled and destitute members; providing services like safe shelter, healthy hygienic food, health care, medical support, physiotherapy, education for special children, personal and overall hygiene, cloths, vocational – skill development and self-reliance training and make ashram residents self-dependent, rehabilitation and making them part of the mainstream of the society to live life with self-respect and dignity.
You can also do a bank transfer to the below mentioned account setup for this fundraising campaign: