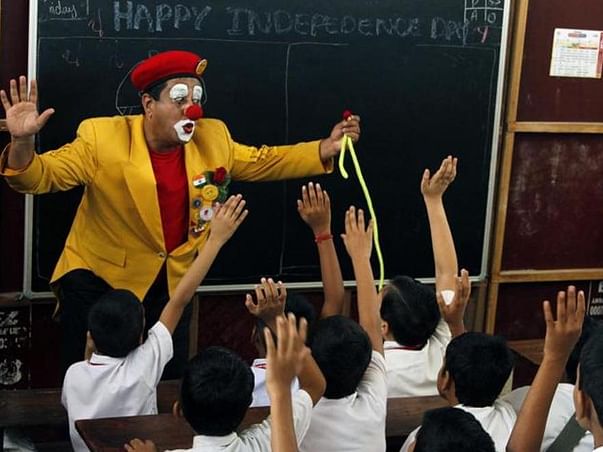 Share
Armed with colorful clothes, a red nose and a magic trick or two, Pravin Tulpule transforms the entire mood of the children’s cancer ward within minutes. This goofy clown goes from bed to bed, cracking jokes and making sure that his audience is enthralled. In his own words, ‘making others happy makes me happy’ – and he has been doing so for the past 20 years.

“I was in the Navy, and as much as I enjoyed being a government employee, my passions lay in doing magic shows (he did his first magic show at age 14) and entertaining people. I quit in the 17th year of my service – even forgoing my pension as I knew that my life had other objectives,”-Pravin

The incident that changed his life

In the year 2000, at the request of a close friend, Pravin did a show dressed as a clown for a group of children with cancer, organized by the WeCare Foundation in Mumbai. A small boy tagged along with him, from the beginning till the end of the show. He even clicked photos with him enthusiastically. A couple of days later, Pravin was pleasantly surprised to find his photo with the boy in a newspaper. He immediately called up his friend to express his pleasure, but was shocked to learn that the boy was no more.

“I was very disappointed but was also relieved to learn that the boy wished to meet a clown in his lifetime. I could fulfill that wish. It gave me a strange satisfaction. From that day onwards, I called myself Happy the Clown, and made it my life’s motto to spread happiness. I have ‘clowned in’ many hospitals, orphanages and old age homes completely free of cost.”

‘If they are able to forget their pain at least for a few minutes, I consider myself successful’

Pravin says that whenever he is in a cancer ward, he tries his best to make sure that the few minutes he has with them makes them forget their pain for a while. He makes them do magic tricks and even lets them pull a prank on doctors and nurses. He focuses on creating a fun, lighter mood in the hospital, which is reflected in the smiles of the children as they wave him goodbye when he leaves at last.

“I have noticed many times that more than the cancer patients, their parents seem to relax when I am around. This is because a thousand negative things are running in their minds that they crave for a positive experience, even if it is just for some time. I have had parents requesting me to just show my face to children in the ICU even, because it gives them happiness even while they are fighting for their life.”

Pravin keeps visiting hundreds of cancer patients and their families regularly. He tries to spread smiles and cheer, but in his experience he has learnt that these alone are not enough.

“I have met many little children whose poor parents had to stop treatment mid-way due to lack of funds. I’ve always thought in these situations – ‘Only if I could find some way to help them financially...they could keep smiling forever’. And now that I have found a way, I need your support to make sure that every cancer-ridden child gets the treatment he or she deserves. Together, we can save lives.”

This happy clown aims to raise funds for children suffering from cancer. All this while, he’s made them laugh. But this time, he wants to do more…he wants to save their lives too.