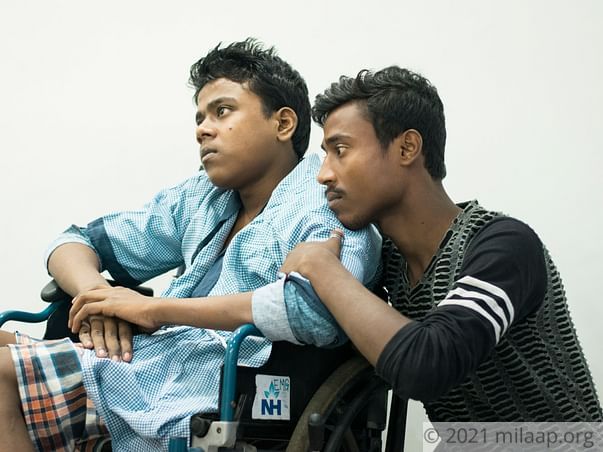 “I never thought that a small lump would turn out to be so dangerous for my brother. For the past few months, he has not been able to walk because of deadly tumors in his nervous system. It was so painful to see his legs gradually losing all movement. His life is no longer the way it used to be. He can neither move, nor can lie down for long,” Ashis, Debasish’s brother.

Delay in getting his condition diagnosed pushed him towards paralysis

Debasish was preparing for his board exams this year. Being the youngest in the family, his parents and brother have never let their extreme poverty affect him.

“Last year we suddenly observed a lump developing at his back. It took us a long time before we could understand what was going wrong. I rushed him to a number of hospitals. It took me a while to accept the truth. It is killing me every day.”

Debasish has a rare disease called neurofibromatosis, a condition in which tumors grow in the nervous system. As a result of this, he has become completely paralysed.  This has even made his back C-shaped.

“One day he was running around, the other day he couldn’t move his legs. His disease was diagnosed a year back. Even after that, he walked on his own for a while. We were hoping for him to get better, but he didn't. For the past few months, he has lost all movement in both his legs. He can't even lie down for long and is in constant pain.”

With no savings and a lot of debt, Debasish’s family has nothing left to save him

As their parents are old and weak, Ashis is the only person who is able to care for his brother now. Initially, he used to take Debashish on his bike to places, but with his deteriorating health, he can no longer ride a bike. Every time they have to go to the hospital, Ashis is forced to spend Rs 1000.

“My father met with an accident years ago and that doesn't let him travel much. For all these years, we were repaying the debts that we incurred for our father's surgery. Both my father and I work in a small factory. I am able to earn only on the days that I go to work. I have not gone to work for the past 2 months. The two of us together made Rs 8,000 a month. Now our income has dropped to about Rs 5000. We have not been able to save even 1 rupee in all these years.”

A surgery is his only shot at beating paralysis, but help is scarce

Ashis has knocked every door in his neighborhood to seek help. He has even asked his employer to help them with funds for Debasish's’ treatment, but he’s hardly received any help. Debasish is running out of time and soon there will be no way to help him.

“Doctors have told us that there aren’t any medicines that can cure him. All he needs is an urgent surgery that will help his back become normal again. My brother will be able to walk only if we can afford his surgery.”

17-year-old Debasish has tumors in the nervous system. It has left his back bent and his legs paralyzed. He needs an urgent surgery to get rid of this condition. His family is already in debt and despite trying hard, they are barely finding a way to save him. The cost required to save him now is Rs 4.5 lakhs, that is way out of their reach.