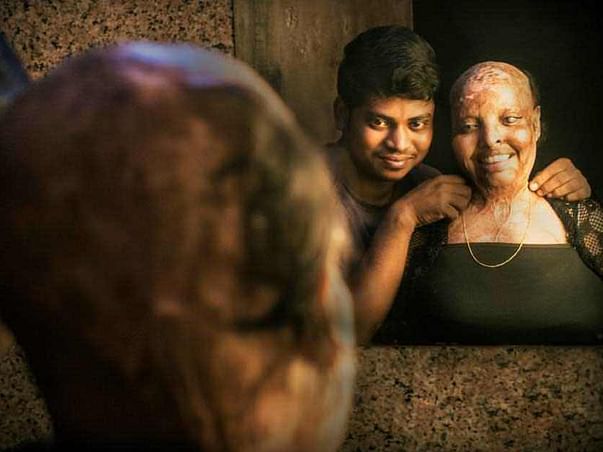 Share
Once a woman who faced acid attack, go through a never-ending struggle to recover from the trauma until it catches the attention of the society, people raise concern to offer support to bring relief to the victim. Same is the case of Pramodini Raul (Rani), a girl from Orissa who was acid attacked 8 years ago. But she has come a long way through the years. Still, her troubles may never end. We are looking for support to help her stand on her own. That she could start a family, settle an occupation and continue a life at peace.
She has recovered from major acid burn injuries caused by the traumatic attack. Fortunately, she has recovered as much as to move on her own. Adding to her happiness is that she has also found love in her life. The person who committed the attack on her was at service in armed forces, never caught by the police for all these years. Recently when her story gained attention in Orissa where she belongs, the police actively searched and took him into custody only after the Chief Minister himself pursued her case to bring her justice.
Rani plans to start living with her beloved Saroj and start a business which can help them both earn a living and run her family in Orissa. So far, she has been associated with Stop Acid Attacks campaign fighting against acid attacks in India and has been working along with her mother at Sheroes Hangout café for earning in all these years. It is a special café in Lucknow, Uttar Pradesh that employs acid attack survivor girls to help them in their earning, education and medical recovery. For the last 4 years, we have been working to help rehabilitation of girls like Rani. It will be a full circle in her rehabilitation once she can start a family and run it at self-sufficiency as she returns home and settles in Orissa. We request your kind support to meet this goal for Rani in the name of love and the fighting spirit she has shown us as a survivor of the acid attack.

Her story so far

At Stop Acid Attacks, most of the girls affected by acid attacks come from a state where these cases happen the most. The highest numbers are reported from Uttar Pradesh, Bihar, Haryana and West Bengal. In the states such as Orissa, cases of acid attacks do not arise much on the surface. For the government, the statistics of acid attacks are not very substantial as they compare it with other crimes like rape and molestation. Our courts also categorize acid attack as rarest of the rare cases of violence against women. In such scenario, it was very difficult for Rani to find justice or any medical aid for the recovery from the acid burn. In states of high statistics of acid attacks, the state government also pays the compensation fund to the victim after the attack. Rani was deprived of all of this assistance at the time of the attack.

When she was attacked

She is a 24-year-old native of a village near Bhubaneshwar, Orissa. In 2009, there was an army camp set up near her home. Rani used to pass that road to go to her intermediate school. A person from the camp started to notice her and started following her as she returned home from school. He managed to find out the residence and personal contact of Rani. Then he continued to call her on her number very often. Most of his calls went unanswered from Rani. She found herself stuck in this situation when one day she decided to confront him. To the one-sided love expressed by that man, Rani told him that she was simply too young to get married. She asked him to wait for at least 6 more years so she could complete her studies. He was not ready for that. He gave her two and the only options, either she married him soon or allow him to get into a physical relationship with her. Rani refused. A few days after this incidence, while returning home with her cousin by bicycle, he stopped her and threw acid on her. The most terrible thing that could happen to Rani was that she lost her eyes to the extent of blindness after the acid burn.
It took her almost 5 years on the bed to recover from major wounds. Still, it was difficult for her to move. In those years at the hospital she had gained weight.  Moreover when you lose your vision in a traumatic accident like this, you feel scared to even walk. That was her situation. Her mother used to help her everywhere she goes.

She belongs to a family which is financially challenged. Also, she has a young sister back in her home who is mentally challenged. It was hell of a  challenge for her mother to take care of them both. In those days a local political campaigner and close friend of her living near her home gained some knowledge about our organization. He helped Rani get in contact with our campaigners.
Rani and her mother left Orissa and started working at Sheroes Hangout cafe. They were earning enough to find hope for the future while Rani strived to recover her vision. Earlier in 2013, she went through eye treatments at Dr. LV Prasad Eye Hospital in Hyderabad but due to lack of funds, she couldn’t continue. In 2016, our campaigners gained some grip with the state government in Uttar Pradesh and later that year she got along with other survivors who had acid injuries like her, went along to Chennai for the eye treatment at Sankara Nethralaya Eye Hospital.
Rani finally recovered her eyes after the last surgery. Now she has almost started to see objects clearly. Although cannot say she sees clearly. Ever since she has gained some sight of the world around her, she has asked her mother to stay back and help run their family in Orissa.

She found the love of life Saroj

During her time at the hospital in Chennai, she found a worthy relationship to walk together with Saroj. He is a young boy of her age from her native state. He met Rani, expressed her of his love and soon they felt getting into a committed relationship.

She still has a long way to go for complete medical recovery but now she has all the courage and hope as she has Saroj to take care of her. Gaining better health and finding Saroj, she is all set to start a new life with him in Orissa.

After she returned from the hospital, they both traveled together to their native place to find more girls who were acid attacked and remain unattended. They have started to help them in finding relief from the state government and from the people who helped her.

The attacker has been taken into custody after 8 years

It has been 8 years Rani has been attacked, she could not find justice since. The attacker was a young Indian Army service. After many years of campaigning against such violence, it has recently been possible for the campaigners of Stop Acid Attacks to gain the attention of the state government of Orissa and make interventions in catching the attacker who committed the crime. Last December when the Chief Minister of Orissa took matters in his hands, the attacker was caught by the police bringing justice to her.

The Chief Minister of her native state acknowledges her case

November this year Rani along with few of her friends visited Bhubaneshwar, Orissa where they were invited to walk the ramp of a fashion show organized by a local group there. After the show happened the news of acid attack survivors walking the ramp redefining beauty of women as models were all over the city. It gained the attention of the Chief Minister of Orissa Shri Naveen Patnaik. Soon a friend and supporter of Rani made it possible to have a chance discuss the issues of acid attacks in the state.
Meeting the CM of Orissa and having a discussion over acid attacks related issues was definitely encouraging for all of us as he offered his will to support Rani and her friends in every substantial development that might be needed to stop such violence against women in the state. Just to mention the other friends of Rani accompanying her to meet the CM belong to Uttar Pradesh where they had face acid attack. The good part is that the state government has been very supportive there to help the recovery of acid attack victims. Rani's case was exemplary to the CM and it seems he was very well communicated.

She met the Minister of WCD, Govt. of Orissa

Rani and her team also approached the Women and Child Development Minister in Orissa to discuss over the situation and challenges of acid attack victims and the policies that could help any acid attack surviving women, girl or children to achieve adequate medical treatment totally sponsored by the government. Rani and her friends of U.P. have been an example as there the state government offers free medical treatment for recovery from the trauma. Even Rani has been benefited to some extent, even though she is from other state. The Minister also seemed very co-operative to look into the matter and helped us in finding the unheard acid attack survivors in the state and further help them.

She confirmed Rani to further help bring policy reforms for free medical treatment and would also look into policy changes to pay the compensation fund to those victims in the state.

Objective of this campaign

At Stop Acid Attacks, we focus on changing such stereotypes. We have come so far to make these girls more confident in facing the society. That is expressed as you visit Sheroes Hangout café and find these girls working for themselves with dignity and show the least hesitation to cover the scars on their face when they meet and greet the visitors. Finding love and starting a normal life is the dream of any of the girls. Among those Rani has been very fortunate.

The engagement of Rani and Saroj

For the reasons we feel supportive of Rani and Saroj as they plan to celebrate their engagement ceremony with their family and friends at the café with other girls who are survivors. This is a celebration of victory over the jilt of the person who attacked her. It is again going make other girls at the café feel more encouraged to pursue their dreams as Rani did in her life.

Starting a food/canteen business at their place

They will return to their place in Orissa to settle. Rani’s family is very poor. Her mother does petty work to earn and raise her younger sister who is a mentally special child. On the other hand, Saroj is also as young as Rani and does not have a very successful career ahead. All we can do to help them is start a local business that can be run by Rani and Saroj. They shared that they are interested in setting up a canteen serving meals in the town where Rani belongs. Later they may also start serving tiffin to the many offices and factory around that place. This local business will be enough for them to run their family of four.