This Farmer Cannot Even Afford Food &amp; Is Losing His Wife | Milaap

This Farmer Cannot Even Afford Food & Is Losing His Wife 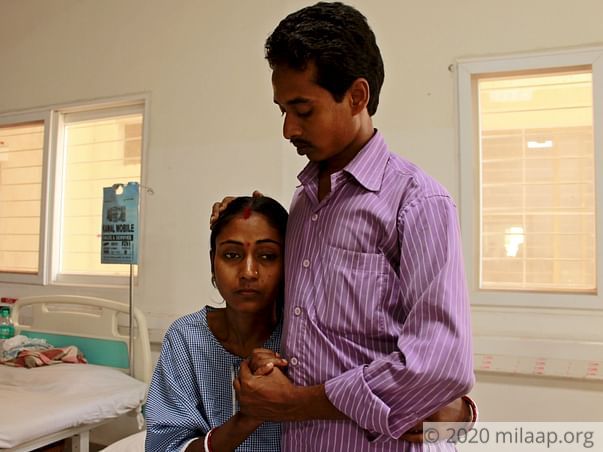 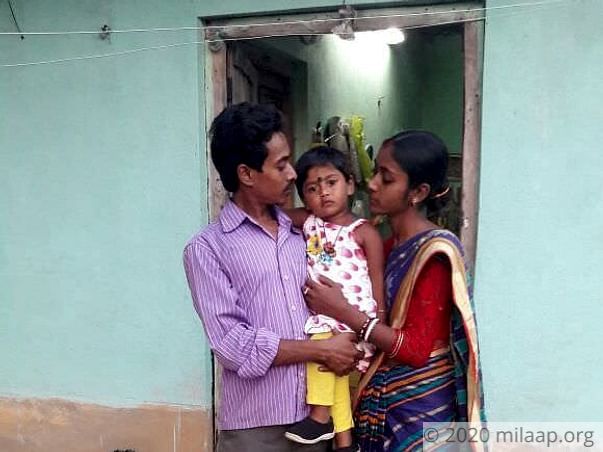 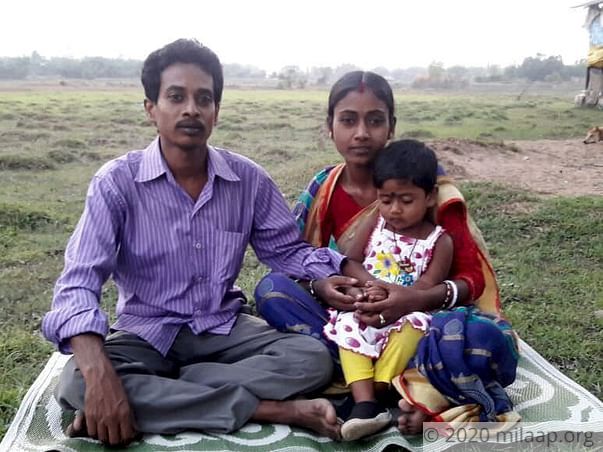 “I don’t even have money to feed my 1-year-old daughter more than once a day. My wife’s tumor has left her unable to breastfeed our daughter and this is depressing for any mother. How can I save my wife when I have nothing to feed our family?” – Kartick, Chumki’s husband

Chumki and Kartick at the hospital

Due to the lack of money and resources, Chumki is at high risk of lung failure and losing a leg to a dangerous tumor. Chumki lost the functionality of one of her lungs due to a previous surgery, but the tumor has sprung up again and is slowly taking her life. Her husband, who is a poor farmer living in deplorable circumstances, is finding it extremely difficult to save his wife.

Chumki’s tumor returned and was worse than before

Chumki was diagnosed with a cancerous giant-cell tumor (GCT) on her knee over 4 years ago. She was in so much pain that every step would take the life out of her legs. She underwent a surgery at that time, which was thought to be the end of the tumor.

“It would still hurt when she’d walk but we thought that it’s normal to feel pain after a surgery. In August 2017, her chest started hurting and after several X-rays, MRIs and PET scans, we found out that the tumor on her knee was not only worse than before but it had also spread to her lungs.” – Kartick

Chumki’s condition had worsened quickly and she couldn’t breathe normally because of the cancerous tumor on top of her lung. If untreated, this tumor would destroy her lungs and kill her. She was so critical that she had to be admitted immediately.

Chumki lost one of her lungs to the tumor

As a life-saving measure, the tumor, along with a major chunk of one of Chumki’s lungs had to be cut off. Since September 2017, Chumki has been barely surviving on just one lung.


“The operation on her lungs and her leg needed to happen at the same time. But there was no way I could afford both, so the doctors removed the tumor on her lungs since that was deadlier than the other. I sold all the jewelry we received during our marriage and all the goats and buffalos we owned. Now we are left with nothing.” – Kartick

Chumki is unable to walk due to a sharp pain

Chumki’s tumor in her leg is getting worse every single day. Like before, this tumor has extremely high chances of spreading quickly to the functioning lung, which would be fatal. If her tumor isn’t removed in time, her entire leg could be amputated.

“During her operation in September, the doctor said that her leg would need to be treated within a month. It’s already April and there has been no progress.  Now, her leg hurts so bad that she can’t walk even if I’m supporting her.” – Kartick

Kartick is a farmer in rural West Bengal and earns a meager sum of Rs. 4500 every month. Due to the cancerous tumor, Chumki had been advised not to breastfeed her 1-year-old daughter, Bidisha.


“She cries every day because of this. Any mother would be devastated. Chumki barely eats anything herself and Bidisha has become so thin. I have spent everything I had and now, I don’t even have money to buy flour for roti. I just eat once a day and since August, I’ve been so hungry every day that now I don’t even feel the hunger.” – Kartick

Kartick, Chumki, and their daughter Bidisha

“My mother has a kidney stone too and it is hurting her every day. I don’t know what to do. Should I help my mom or my wife? Who will look after my daughter? I can’t lose my wife. It feels like every drop of happiness has been removed from my family.” - Kartick

To get Chumki’s tumor removed once and for all, Kartick is in dire need of Rs. 4 lakhs. He has spent over Rs. 1.5 lakhs on the previous operation after selling everything he owned. He needs your support so that his daughter has a mother for the rest of her life.

23-year-old Chumki has already lost one of her lungs to a dangerous tumor. The tumor is still growing inside her leg and is slowly killing her. Kartick, a poor farmer, doesn’t even have money to feed his family more than once a day and is running out of time to save his wife.

Your support will save Chumki and will ensure that his daughter has a mother for the rest of her life.

UPI: rzpy.givetomlpchumkima001@hdfcbank (Copy to clipboard)
Or
Click here to read the instructions before you make a bank transfer. 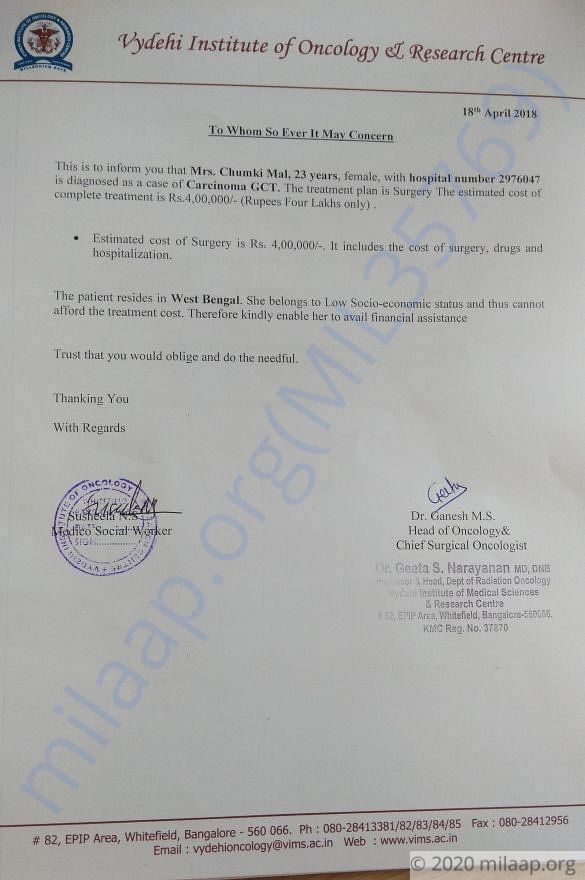 UPI: rzpy.givetomlpchumkima001@hdfcbank (Copy to clipboard)
Or
Click here to read the instructions before you make a bank transfer.

Here's a quick update on Chumki-mal. Currently she is at home and is doing well. Here's a recent photo of Chumki-mal.

Dear Supporters
Mrs Chumki Mal is discharged in good health after surgery. I thank all of you for the generous contributions.

Thanking you
Yours Truly
Dr Marie

Dear Supporters,
Thank you all for your support.

Chumki was discharged from the hospital as the family could not bear the expenses. As of now, her condition is the same as before but with the help your contributions, we found hope.

We can now now have an operation for her. Chumki will be undergoing those operations soon once the doctors fix a a date.

Thank you so much for your support, we shall keep you all posted.
Please pray for her to have a successful operation.

Thank you,
Regards,
Kartick
Donate
Report fundraiser
See how thousands are crowdfunding for their causes on Milaap
Rs.546,022 raised

Please apply to Prime minister national relief fund through your MP & you can get upto Rs. 3 Laksh for treatment.

Please apply to Prime minister national relief fund through your MP & you can get upto Rs. 3 Laksh for treatment. 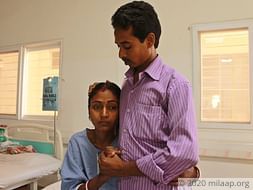 This Farmer Cannot Even Afford Food & Is Losing His Wife