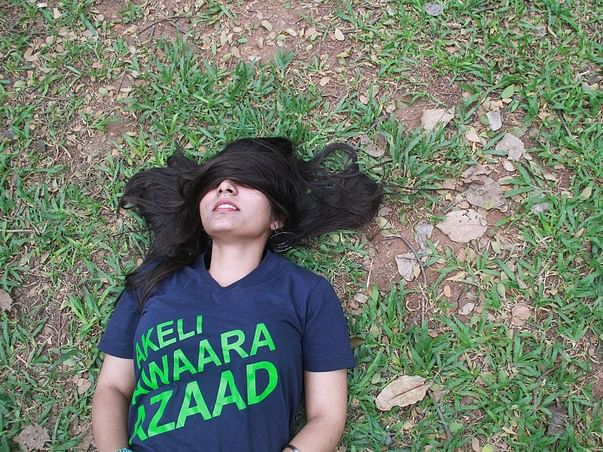 Imagine a Bengaluru, with hundreds and thousands of women, across identities and backgrounds, walking alone, at night. Walking, without fear. Knowing believing Bengaluru, is their city. Replacing fear with pride and belonging.
What would the city feel like?
Blank Noise creates public and participatory actions, mobilising citizens to become ‘Action Heroes’. Any Action Hero is anyone who takes agency in building a safe space to end sexual and gender based violence. This could be a new normal, if we as citizens,  set out to do did it over and over and over again.
About the initiative
On December 2nd, 2017 Blank Noise will hold an initiative to unite Action Heroes, who will walk after sunset, on a to-be-decided route, in Bengaluru. Action Heroes will wear multi-lingual t-shirts that read Akeli, Awaara, Azaad or Onti Alemaari Svatantra, meaning Alone, Wanderer, Free. The t shirts with messages will enable and unite, women Action Heroes to walk claiming freedom from fear.
Founded by Namma Bengaluru Awards Social Entrepreneur of the Year 2016 Jasmeen Patheja, Blank Noise has for years now mobilized 'Action Heroes' i.e. citizens and individuals, across India and beyond, to unite, eradicate, sexual and gender based violence.
How you can help
Blank Noise needs your support to raise funds required for designing, production and dissemination of the T-shirts to be worn by the Action Heroes. If you help Blank Noise raise Rs 2 lakhs, then the organization will be able to roll out 500 T-shirts.
Languages for T-shirts include: Kannada Hindi, Urdu, and English.
Message from Jasmeen Patheja
To live in environment of warnings , is to be told, “ if you experienced violence , perhaps you were not being careful enough” . Warnings lead to blame. Blame leads to shame and silence. Silence perpetuates sexual violence. Akeli Awaara Azaad is for our right to co-create and live in a world, free from fear, where sexual violence holds no excuse.